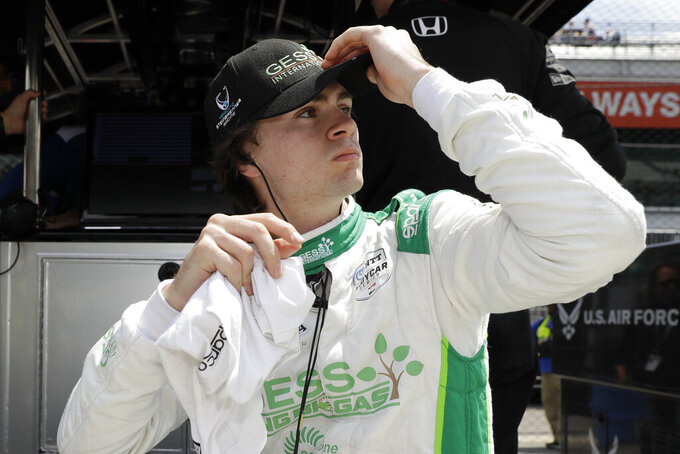 FILE - In a Tuesday, May 14, 2019 file photo, Colton Herta looks at his practice results during a practice session for the Indianapolis 500 IndyCar auto race at Indianapolis Motor Speedway, in Indianapolis. Herta is closing in on a deal to be pulled inside the Andretti Autosport camp as IndyCar drivers are getting a jump on their 2020 plans. (AP Photo/Darron Cummings, File)

MONTEREY, Calif. (AP) — Colton Herta shifted the spotlight away from IndyCar's championship race with yet another masterful drive around Laguna Seca Raceway.

The 19-year-old rookie won the pole for Sunday's season-ending race roughly an hour after Andretti Autosport said it was pulling Herta inside its organization next season. It's capped a masterful debut weekend at Laguna Seca for Herta, who has been one of the fastest drivers in every session.

His win this season days before his 19th birthday made him IndyCar's youngest winner, and Saturday's pole was his third of the season. His father, Bryan, is a two-time winner at Laguna Seca and won three poles at the track, which returned to the IndyCar schedule this year after a 14-year absence.

"Good genes," Herta said of his ability to navigate around the 11-turn, 2.258-mile permanent course. "It means a lot to keep on the family tradition."

Herta stacked all four of the title contenders behind him with his fast qualifying lap.

Scott Dixon qualified second and was followed by Alexander Rossi and Josef Newgarden. James Hinchcliffe, who is not in the championship hunt, was fifth. Indianapolis 500 winner Simon Pagenaud was sixth and lowest of the title contenders.

Newgarden has a 41-point lead over Rossi in the championship standings, and Sunday's race is worth double points. Because Herta won the pole, he denied the title contenders the bonus point reward they could have used in their championship fight.

But that point is critical for what has become an enticing race for rookie of the year among three drivers who seem destined for IndyCar stardom. Herta is third in the rookie standings behind Felix Rosenqvist and Santino Ferrucci, who have also been exceptionally fast all weekend — so fast that many thought Rosenqvist was a threat for the pole.

Instead, he was left fuming after qualifying because he was penalized during his run for bringing out a local yellow and interfering with another driver's qualifying lap. The punishment prevented him from advancing into the next round and ruined what he expected to be a strong starting spot.

The Swede railed against the decision and wondered if IndyCar had deliberately punished him to help Herta win rookie of the year.

"I don't know what they're thinking. That lap didn't mean anything for anyone. I had a spin. Then they're saying I blocked someone while I was spinning," Rosenqvist said. "We've been working for three days for this moment. We had the fastest time on track. The guys just did an incredible job. I think it's pretty unfair for them to just take that away.

"They ruined our day. I don't why. Maybe someone has something against me. Or they want Herta to win the rookie championship, whatever. But I guess I have to regroup for the race and find a good strategy starting from the back."

Ferrucci qualified 12th and Rosenqvist was 14th, lowest of the rookie contenders. Even the championship contenders were surprised that Rosenqvist won't be at the front when the race begins.

"To be fair to Felix, he has been fast all weekend," Newgarden said. "He probably would have been in contention for the pole. Just on merit, he probably should have been up there."

Instead, it will be Herta leading the field to green with all four title contenders anxious to get to the front and win the race. Newgarden needs only to finish fourth or better to win his second title in three years for Team Penske no matter what his three challengers do Sunday.

But with Herta at the front, there could be strategy for the rookie to assist Andretti teammate Rossi. Herta is already aligned with the Andretti group in his current ride with Harding Steinbrenner Racing, but that organization will be folded into the larger Andretti group next season, making Herta a true Andretti driver.

Asked specifically if he'd give Rossi the lead to win the championship, Herta wasn't sure.

"Tough question. I don't know," he said. "I am sure I am going to get talked to tonight about something of that nature. If I'm leading, it is going to be really hard to say yes. There's got to be some incentives there."