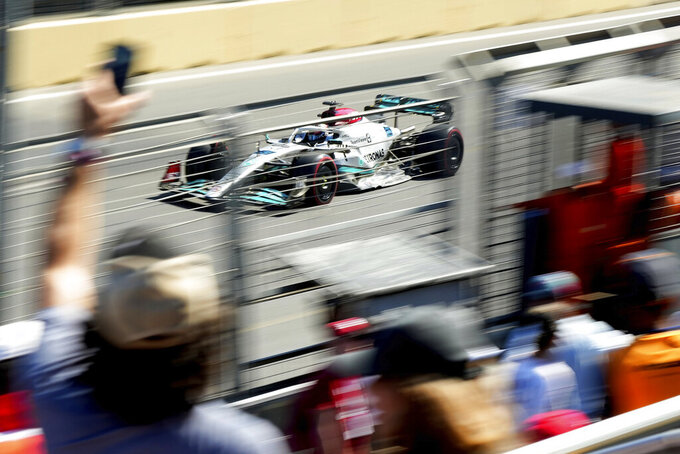 Mercedes driver George Russell of Britain steers his car during the third free practice at the Baku circuit, in Baku, Azerbaijan, Saturday, June 11, 2022. The Formula One Grand Prix will be held on Sunday. (AP Photo/Sergei Grits)

BAKU, Azerbaijan (AP) — Lewis Hamilton said he woke up in pain Saturday because this season's Mercedes car has a tendency to bounce up and down at high speed. Now the seven-time Formula One champion and new teammate George Russell have questioned whether new 2022 rules force them to compromise their safety.

Moving to “ground effect” — where the floor generates aerodynamic grip — for this season was meant to tighten the competition between the cars. However, some teams have struggled with cars that bounce up and down at high speed — a phenomenon referred to “porpoising" — or bottom out and bang against the track surface.

Mercedes has been among the hardest hit. Hamilton said his “back was a real mess” after Friday practice and credited performance coach Angela Cullen for getting him in condition for Saturday qualifying.

“Thank God for Angela giving me physio every night and acupuncture. I woke up with quite a bit of pain this morning,” Hamilton said.

With ground effect potentially here to stay until at least 2026, Hamilton indicated he'd support rule changes to reduce the bouncing.

“I think it can be a safety thing, for sure,” he said. “There's not really a lot that we can do to stop it, and we can't have this for four years of this car, so I think they do need to work on it.”

Any rule changes might face a backlash from teams which have designed more stable cars. Some believe Mercedes could reduce the problem with setup changes; Mercedes could sacrifice a little speed by not running its cars so low to the ground to extract more performance.

Title contenders Max Verstappen of Red Bull and Charles Leclerc of Ferrari are among those drivers who have expressed less concern about the issue.

Hamilton's teammate Russell complained of back and chest pain earlier in the season, and suggested Saturday the bouncing and rattling could lead to a serious crash.

“It's just brutal out there, being shaken to pieces, and you can barely see where to brake at the end of a straight because we're bouncing around so much,” Russell said.

“I think it’s just a matter of time before we see a major incident. A lot of us can barely keep a car on a straight line over these bumps," he continued. "We’re going around the last two corners at 300 kilometers per hour (186 mph) bottoming out ... With the technology we have in today’s environment, it just seems unnecessary that we’re running a Formula One car over 200 mph, millimeters from the ground, and it’s a recipe for disaster.”

Mercedes was optimistic of making progress after seeming to reduce the “porpoising” at the Spanish Grand Prix last month, but it struggled with the bumpy road surface at the next race in Monaco. The track in Baku is also on public roads but with the racing is at much higher speeds than in Monaco.