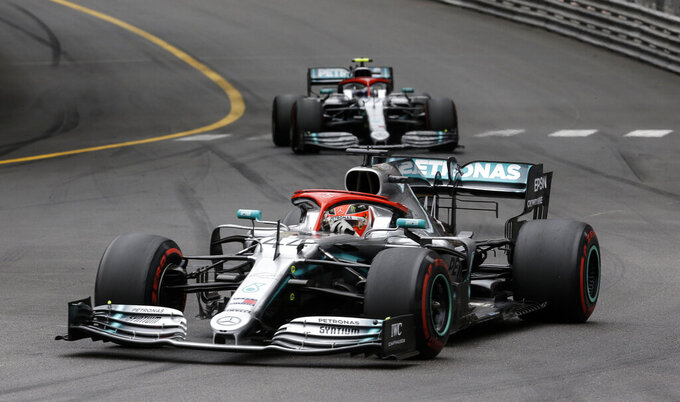 Mercedes driver Lewis Hamilton of Britain sees his car in front of Mercedes driver Valtteri Bottas of Finland during the Monaco Formula One Grand Prix race, at the Monaco racetrack, in Monaco, Sunday, May 26, 2019. (AP Photo/Luca Bruno) 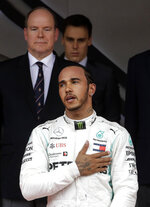 Holding off Max Verstappen on fading tires that made his Mercedes slip around, Hamilton clinched his fourth win of the season and 77th of a glittering career. The five-time F1 champion ranked it among his best five drives.

"I appreciate a tough race," Hamilton said. "Ultimately as an athlete you want the toughest battles when they come."

Verstappen, despite being hit by a five-second time penalty, would have been hard to catch had he got ahead of Hamilton. For more than 30 laps, Hamilton managed to both maintain his speed and fend off Verstappen — one of the most aggressive and quickest drivers in F1.

"I don't know how I did it today," Hamilton said. "There were just so many opportunities to make mistakes."

It was a particularly poignant win for Hamilton, who dedicated it to the memory of friend and mentor Niki Lauda, who died on Monday at the age of 70 less than one year after a lung transplant.

"I definitely felt he was with me today," said Hamilton.

The day belonged to both Hamilton and to the memory of the much-loved Lauda.

Fittingly, Verstappen drove brilliantly, too, considering he was not just chasing Hamilton but also competing against his time penalty. Even though he finished just behind Hamilton, Verstappen placed fourth overall behind Mercedes driver Valtteri Bottas in third and Ferrari's Sebastian Vettel in second.

Before the race, drivers wore red caps for a minute's silence in Lauda's memory.

As he climbed out of the car after winning, Hamilton removed his race helmet and pointed to Lauda's name on the back.

"I was fighting with the spirit of Niki," Hamilton said. "I was just trying to stay focused and make him proud."

It was the first time in six races this season that Mercedes has not placed 1-2.

"Good result but not a good weekend for us," Ferrari's Vettel said. "The lesson from here is that we're not yet where we want to be. The pace isn't there."

Leclerc damaged his right rear tire trying a bold overtaking move on Nico Hulkenberg's Renault, scattering debris over the track and forcing the safety car to come out.

Hamilton extended his lead over Bottas from seven to 17 points, and it is now 14 races since Vettel's last win for Ferrari at the Belgian GP last August.

"Who's counting?" Vettel said in the post-race news conference, with a hint of sarcasm.

Still, he vaulted past Verstappen into third in the season standings.

Hamilton's ability to hold off Verstappen was impressive, even though it was on one of the most difficult tracks for overtaking. Hamilton kept complaining about the state of his front left tire, but his team decided against a tire change because Verstappen — even though faster — had limited chances to pass on the sinewy 3.3-kilometer (2-mile) track.

Hamilton is among the best in F1 history, but this time his team effectively made the right call in overruling him and keeping him on track.

Verstappen was given the penalty by race officials after his unsafe release from the pits earlier in the race.

When Leclerc's crash sent the safety car out, drivers pitted to change tires. But Verstappen's Red Bull was released too soon and he clipped the side of Bottas as it drove past.

The incident moved Verstappen up to second place, Vettel into third, and Bottas down to fourth.

Leclerc had made a thrilling start from near the back, overtaking the Haas of Romain Grosjean with a brilliant attacking move coming out of the turn at La Rascasse.

But one lap later the driver from Monaco tried the same move on Hulkenberg and it backfired.

"We had to take a risk — maybe a little bit too much on my part," Leclerc said. "It's a weekend to forget apart from the support which I received here, which was heart-warming."

The only driver from Monaco to win the race was Louis Chiron in 1931.

Although the 21-year-old Leclerc has time well on his side, he now must wait at least another year.