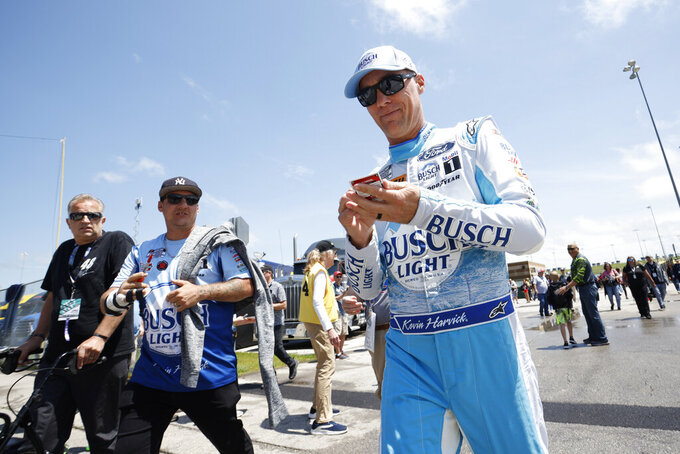 MADISON, Ill. (AP) — Kevin Harvick takes a pragmatic approach to NASCAR's version of the playoffs, considering he has yet to win to qualify and is just 31 points above the cutoff heading into the Cup Series' debut at World Wide Technology Raceway.

“Just tell me where I am at the end of 26. If we're in, we're in. If we're out, we're out,” said Harvick, the 2014 champion, who has qualified for the playoffs every year since 2009. “I have so much other stuff to think about trying to help with the cars and going to different places that you can't really count points.”

If nothing else, he should have some confidence at the track long referred to simply as “Gateway.”

The 46-year-old Harvick remembers running Xfinity Series cars around the 1 1/4-mile hairpin east of St. Louis in the late 1990s and early 2000s, including a pair of wins more than two decades ago. And he won a Truck Series race in 2010, just before the track was shuttered amid an economic downturn.

It was resurrected by local businessman Curtis Francois and has grown and evolved over the past decade, leading to the return not only of the Truck Series but IndyCar and, for the first time Sunday, NASCAR's premier series.

While two dozen drivers in the field have experience at Gateway, Harvick is among nine that have won at the track in the Xfinity or Truck series. And of those nine, he's among seven that have yet to win a Cup race this season: Martin Truex Jr., Brad Keselowski, Bubba Wallace, Cole Custer, Christopher Bell and Justin Haley are the others.

“I think every year we should go to a new schedule, have different places to go, really diversify,” said Bell, who is 58 points above the cutoff with 12 races left before the playoffs. "Going to tracks, especially two times a year, like we’ve been doing, I feel like it dilutes the event. It would be really good if we could go to venues once a year or maybe every other year and just rotate the schedule to make every event more special and popular. I think it would make every race a bigger deal.”

It has certainly been a big deal for St. Louis. Thousands of fans came out for the first practice session Friday night, and they were out early Saturday for Cup qualifying with 30,000-plus expected for the afternoon Truck race.

Chase Briscoe will sit on the pole for Sunday's race. It's already a sellout, which means more than 60,000 fans in the long front-stretch grandstand, the seats in Turns 1 and 2, the nearby campgrounds and the hospitality areas.

Besides being new to many drivers, the track itself is an oddity: It has an egg-like shape with tight first and second turns and sweeping third and fourth turns. That means drivers have to downshift twice at the end of the front stretch and once at the end of the back stretch, which could make for a long day in temperatures expected to hit 90 degrees Fahrenheit (32 Celsius).

“It just helped me in finding my way to the track,” Tyler Reddick said of his own experience in three Truck Series races at Gateway. “Other than that, I'm not sure how much it helps. It's been repaved. The car is a lot different. It feels similar but in a lot of ways, all the truck experience hasn't aided me in how I've prepared.”

Keselowski wasn't sure he had Zane Smith's phone number when he learned Chris Buescher, his teammate at RFK Racing, had tested positive for COVID-19 this week. But after shooting Smith a text message to make sure, Keselowski called and offered the 22-year-old a shot at his Cup debut this weekend.

“I've been watching Zane for a while now and I'm impressed with what he's doing,” Keselowski said of putting him in the No. 17 car. “Hopefully he'll have a solid outing for what's next in his career and we'll have Chris back next week.”

There's plenty on the line: Buescher is 21st in the standings and is still in contention for a playoff berth.

Buescher crashed last Sunday night at Charlotte, flipping his Ford onto its roof, and it took safety workers a while to get him out of the car. Keselowski thought it was a few minutes but someone told him it was closer to 7 minutes before Buescher, who was uninjured in the wreck, managed to climb out of it.

Keselowski hopes former driver Jeff Burton, who heads the Drivers Advisory Council, will take a look at the incident.

“It's never going to be zero,” Keselowski said, “but we can all agree that seven is too long.”

Kyle Larson is the favorite at 4/1 odds for Sunday's race, according to FanDuel Sportsbook. Chase Elliot was next at 11/2 with Denny Hamlin, last week's winner at Charlotte, and William Byron at 15/2.