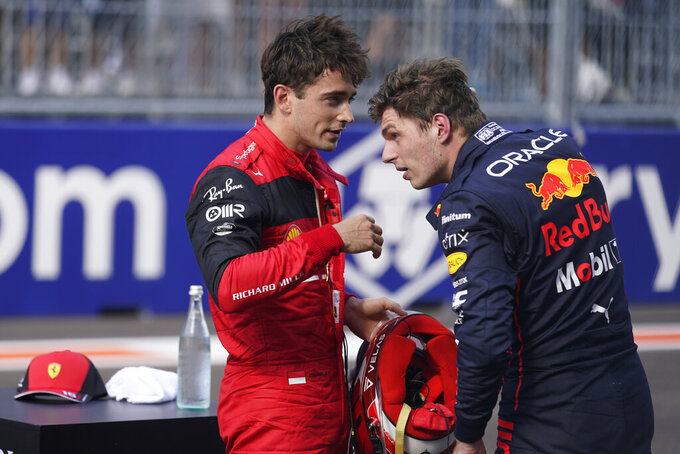 Ferrari driver Charles Leclerc of Monaco speaks with Red Bull driver Max Verstappen of the Netherlands following qualifying for the Formula One Miami Grand Prix auto race at the Miami International Autodrome, Saturday, May 7, 2022, in Miami Gardens, Fla. Leclerc will start in pole position in tomorrow's F1 race and Verstappen in the third. (AP Photo/Darron Cummings)

MIAMI GARDENS, Fla. (AP) — Ferrari stormed to the front of the grid for the inaugural Miami Grand Prix as Formula One championship leader Charles Leclerc and teammate Carlos Sainz Jr. locked up the front row in Saturday qualifying.

It's the first time Ferrari will lead the field to green in the United States since Michael Schumacher won the pole at Indianapolis Motor Speedway in 2006. It's the first front row this season for Sainz, who has been outqualified by Leclerc in all five sessions.

Leclerc has won three poles this year headed into Sunday, the first F1 race at the purpose-built circuit around Hard Rock Stadium. The race marks the first of two this year in the U.S. — which has not hosted two F1 races in the same year since 1984.

Leclerc turned to the roaring crowd and waved while being interviewed by Danica Patrick, the retired IndyCar and NASCAR driver.

“The fans are crazy. It's incredible to be here in the U.S. and see how much the support has grown over the last few years,” Leclerc said. “I've seen so many people in the grandstands. It definitely motivates us.”

Reigning world champion Max Verstappen led the final qualifying segment until the Dutchman made a rare error and both Ferrari's surged ahead of him in the final seconds. He'll start third on Sunday; Leclerc and Verstappen have split the first four races, two wins apiece.

“It's quite slippery outside of the normal racing line, but we'll see. A lot of things can happen,” Verstappen said.

Sergio Perez was fourth as Red Bull locked out the second row. Earlier Saturday, Red Bull principal Christian Horner denied a rumor the team plans to sign Fernando Alonso for 2023 and said talks on an extension for Perez would begin during F1's summer break.

“Checo’s doing a great job. He’s driving at a very high level. He’s more comfortable in the team this year,” Horner said. “We’re happy with the job he’s doing. However, we’ve only seen a sample of four races so it’s still early in the year."

Valtteri Bottas qualified fifth, one spot ahead of former Mercedes teammate Lewis Hamilton. Bottas was replaced this year at Mercedes by George Russell, leading to speculation at Imola two weeks ago that Bottas holds a grudge based on his late-race battle with Russell for position.

“No, it’s points, were chasing points and always just really trying to maximize every opportunity, every position you can make,” Bottas said. “The target was more points rather than a person.”

Hamilton qualified sixth in a small improvement for Mercedes, which has struggled since the debut of its new car. He outqualified Russell, who was fastest in Friday's second practice but failed to advance out of the second round and was 12th.

“I just don't think I have the confidence in the car today,” Russell radioed his Mercedes team.

Hamilton, meanwhile, had both former First Lady Michelle Obama and director George Lucas watching from his pit. Hamilton had an eventful opening to the weekend when he arrived at the venue Friday wearing all the jewelry he could fit in protest of the FIA's new crackdown on wearing bling while competing.

Hamilton said he has piercings he can't remove and was willing to sign a liability waiver. The FIA, the governing body of F1, claims the jewelry is a safety hazard. On Saturday, it amended the ban to include wristwatches.

“It is clear that regulations are here to protect the drivers; on the other side, we need to keep the possibility on diversity and the means of expression and expressing yourself,” said Mercedes boss Toto Wolff. “And we know that this is important for Lewis, so without going into detail where the piercing stayed... I’m sure they will come to a good resolution.”

It's been a disappointing weekend for Haas F1, the team owned by California businessman Gene Haas, who also owns a NASCAR team with Tony Stewart. The team has been much improved at the start of this season from last year, when Haas was worst on the grid and failed to score a single point all year.

But in qualifying Kevin Magnussen, who has 15 points through the first four races, failed to advance out of the first round. Mick Schumacher did advance into the second round but only qualified 15th, one spot ahead of Magnussen, and the “American F1 team” will have a long Sunday drive to impress an expected 85,000 spectators.

At least half of the IndyCar paddock is in Miami for the event and that includes Michael Andretti and his father, 1978 F1 champion Mario Andretti. Michael Andretti failed last year to buy an existing F1 team and has since applied for expansion to start a new two-car team.

He hasn't received any word back from the FIA or Liberty Media, the American company that owns F1. Andretti wants to bring Colton Herta, a 22-year-old IndyCar driver from California, to F1 but Herta has been signed to a testing contract by McLaren as Andretti awaits his fate.

The paddock did not sound eager to welcome two new cars to the grid anytime soon, as Wolff said Saturday he was against diluting the purse and other team principals stressed expansion must only be done if the team plans a legitimate effort.