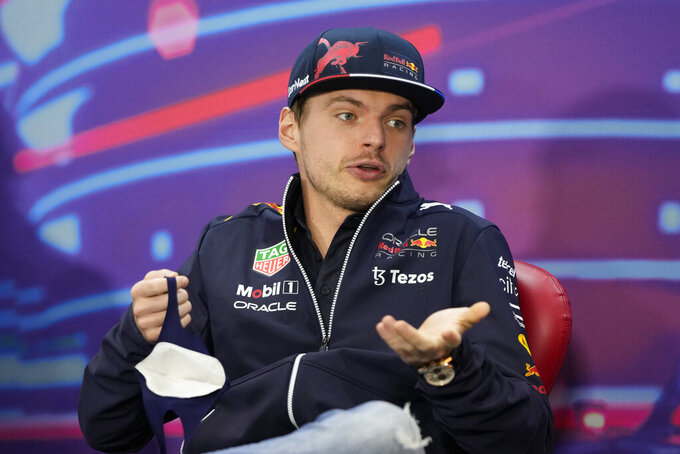 Red Bull driver Max Verstappen of the Netherlands speaks ahead of a press conference at the Formula One Bahrain International Circuit in Sakhir, Bahrain, Friday, March 18, 2022. The Bahrain Formula One Grand Prix will take place here on Sunday. (AP Photo/Hassan Ammar)

“I think they’ll be dead last, according to their comments," a deadpan Verstappen said ahead of the first practice session later Friday. “I think they have an awful car, and they've had that already since 2017 in preseason.”

Speaking more seriously, Verstappen said: "No, we’ll find out, but for sure they'll be competitive.”

A dramatic season ended in huge controversy when Verstappen overtook Hamilton on the last lap of the last race in Abu Dhabi, following a one-lap restart.

Verstappen dismissed talk that he has a point to prove because of how the season ended.

“No. I proved that with the most wins and most poles and most laps led. People forget that. They only look at Abu Dhabi, apparently," he said. “If you look at last season, we could have had more wins and more poles, even. It's going to be really difficult to do something like that again.”

Four-time F1 champion Sebastian Vettel and two-time champion Fernando Alonso both said they think Verstappen will thrive as the defending champion, rather than cracking under pressure.

“The motivation is the same, or even more again, because you want to keep winning,” Verstappen said. “As a little kid you're trying to be a Formula One driver and hopefully one day you'll win the championship. But that's achieved, so that kind of pressure of wanting and needing to do that has gone.”

Verstappen, who is the son of former F1 driver Jos Verstappen, insists there is no chance of any complacency setting in.

Hamilton insists he's not heading into the season with revenge on his mind after the controversial ending in Abu Dhabi with Verstappen's last-lap pass.

“That’s not my psyche, that’s not how I’m approaching the season," Hamilton said. “I don't hold any grudge, I don't have any baggage coming into the season. I'll try and shape what's ahead of me, I know I can't shape the past.”

Hamilton won't be backing off.

“I will be a more aggressive driver this year,” Hamilton said. “You’ll see.”