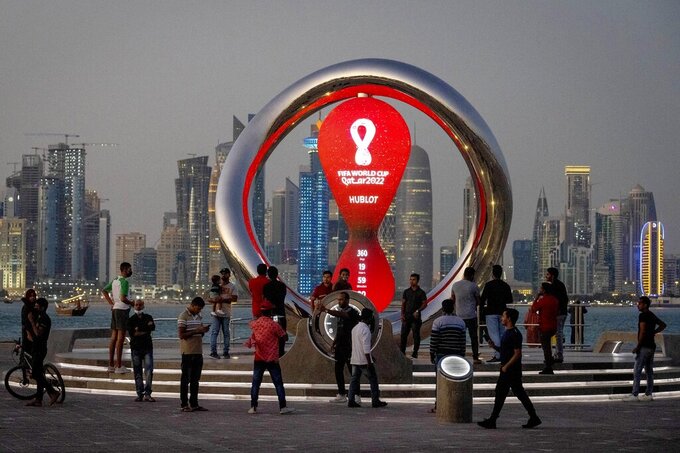 FILE - People gather around the official countdown clock showing remaining time until the kick-off of the World Cup 2022, in Doha, Qatar, Thursday, Nov. 25, 2021. Qatar will host the 2022 FIFA World Cup but soccer isn't the only sport played in the Gulf Arab country. From traditional pursuits to worldwide competitions, Qatar increasingly has marketed itself as a host for sports of all sorts. (AP Photo/Darko Bandic, File)

From traditional pursuits to worldwide competitions, Qatar increasingly has marketed itself as a host for sports of all sorts.

Here's a look at some of them:

Qataris enjoy the traditional sports of the Arabian Peninsula, particularly falconry. In Doha, Qatar's capital, there's even a hospital for the birds in the city's traditional Souq Waqif. Falcons both represent a sheikhly status symbol as well as a link to Qatar's Bedouin past. Falcons compete in beauty contests and races. Camel racing also remains popular, with competitions taking place in the cooler months of late fall and winter. Cricket also is popular, particularly among the Indians and others from southeast Asia who make up the majority of the country's blue-collar construction jobs. Keep in mind foreign workers outnumber citizens in the country, with only one Qatari for roughly every 10 expatriates.

GLOBAL SPORT IN THE SHEIKHDOM

Like other Gulf Arab nations, Qatar has increasingly brought global sporting events to the country. One of the first and longest-running is its annual Qatar Open tennis tournament. The Qatar Masters is a European tour golfing event. It also hosts track and field's Diamond League, as well as competitions for beach volleyball, handball, motocross and other sports. The country hosted its first Qatar Grand Prix for Formula One last year and has hosted the Asian Games. The crown, however, is the FIFA World Cup, awarded to Qatar in 2010. Already, Qatar has hosted the FIFA Club World Cup.

Qatari historians believe soccer came to the country in 1948 as oil workers arrived after World War II to start production there. The country's first soccer team formed in 1950. The Qatar Football Association, formed in 1960, joined FIFA 10 years later in 1970. Its national league began shortly after that. Today, the Qatar Stars League is the country's top soccer league. Twelve teams compete for its championship. Al Sadd Sports Club remains its top club with the most championships won, including last year's. There are a number of Qataris competing, but also foreign nationals from countries including Algeria, Brazil and Morocco. Foreign coaches also lead clubs there. As far as major appearances, Qatar's national team competed in the Olympics in 1984 and 1992. It will play in the World Cup for the first time at this year's tournament as the host.

Hosting the World Cup has thrust Qatar on the global sporting stage more than any other event. Qatar will host the 2023 Asian Cup after China gave up the hosting rights for the soccer tournament, and will also host the 2030 Asian Games. Doha has future plans as well. The Qatari capital has applied twice to enter Summer Games bidding contests without making the International Olympic Committee’s list of candidates. Qatar had thought about trying to host the 2032 summer games, though Brisbane, Australia, already had been selected as the preferred host. That doesn't mean Qatar will stop trying. However, one thing does stand in its way — the heat. In the summer, temperature daily rise above 40 degrees Celsius (104 degrees Fahrenheit) with high humidity. That's why this World Cup is being played in November and December to avoid that level of heat. The IOC prefers to hold the Summer Olympics in July and August, likely putting Qatar out of the running. However, Doha hosted the 2019 track and field world championships in September and October — to sparse attendance and with some athletes collapsing due to the heat.