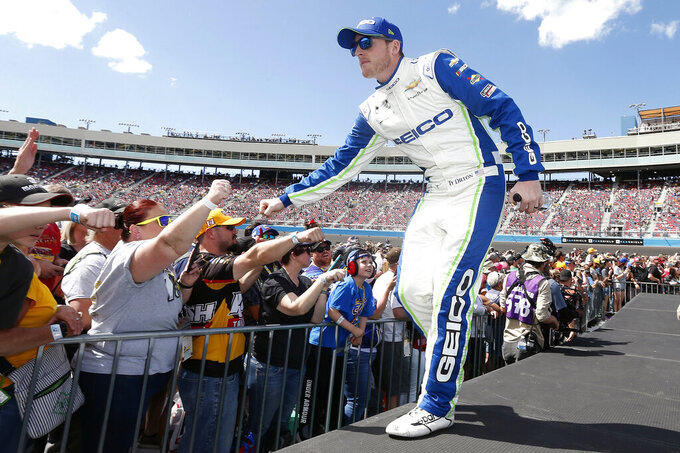 FILE - Ty Dillon during fist bumps with fans during driver introductions prior to the NASCAR Cup Series auto race at Phoenix Raceway in Avondale, Ariz., in this Sunday, March 8, 2020, file photo. Ty Dillon landed a Daytona 500 ride with Gaunt Brothers Racing in a pairing of a driver and team both trying to rebuild in 2021. (AP Photo/Ralph Freso, File)

CHARLOTTE, N.C. (AP) — Ty Dillon landed a Daytona 500 ride with Gaunt Brothers Racing, a pairing of a driver and team both trying to rebuild in 2021.

Dillon spent four seasons driving for Germain Racing but lost his ride when lack of sponsorship led the team to close. Gaunt Brothers last year ran its first full Cup season but struggled in part because COVID-19 protocols wiped out almost all practice, qualifying and testing.

Bass Pro Shops and Black Rifle Coffee Company will sponsor the No. 96 Toyota as Dillon attempts to qualify for NASCAR's Feb. 14 opener at Daytona International Speedway. It's the only race Dillon has announced for 2021, but he's eligible for the Busch Clash and could land the 23XI Racing seat for the exhibition event on Daytona's road course.

Dillon views Daytona as a chance to make a splash in a Toyota and potentially land more races with Gaunt Brothers or other teams.

“I think it’s a great opportunity for me and I can continue down the path to show any sponsor, any team owner, any manufacturer that I’m a very capable driver,” Dillon told The Associated Press. “There’s a lot of opportunity that can come from this chance.”

GBR failed to make the Daytona 500 last season with Daniel Suarez, and Suarez split with the team at the end of the season. GBR has now reset, and its initial 2021 plans are to run at Daytona, Talladega and the road course races on the Cup schedule for 10 total events.

A limited schedule focused only on superspeedways and road courses gives GBR a needed pause after its disappointing first full season. GBR is an independent one-car team that does not have a technical alliance with a NASCAR powerhouse or a charter that guarantees its entry in the field each week.

Without the charter, Dillon will be vying for one of four open slots in the Daytona 500 field. Making the race is the first step in GBR returning to full-time status next season when NASCAR debuts a new car.

“The goal is definitely to come back,” GBR team president Marty Gaunt told the AP. “The timing just wasn't really right for us to continue down the path of full-time racing. When everything lines up for us, driver, sponsor, charter, etc., then we'll be back on a full-time basis.”

Dillon is winless in 162 career Cup starts, but he has one Xfinity Series victory at Indianapolis Motor Speedway and three Truck Series wins.

The 28-year-old is the grandson of team owner Richard Childress and younger brother of Daytona 500 winner Austin Dillon. His brother drives for Richard Childress Racing, but Dillon has made an effort to make his name outside of the family organization.

“I just think having my own identity as a person really means a lot to me,” Dillon said. “My brother and I have always been thrown in the same boat as being kind of the same person. And you know, him and I are really quite different and people deserve to know us for who we are.

“It's not anything against my brother or my grandfather, but I have such close family ties in the sport and a lot of times people just don't see me other than one of the Dillon brothers or on Richard's shoulders.”