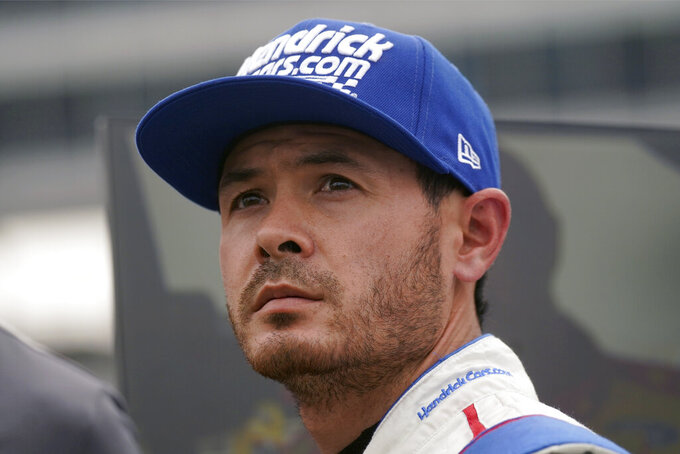 CONCORD, N.C. (AP) — Kyle Larson is hoping a return to victory lane Sunday at the Coca-Cola 600 might propel him to a second straight NASCAR Cup Series championship.

In other words, he’s hoping history will repeat itself.

Larson has just one win this season — three months ago at California.

That puts Larson in a strangely similar situation to last year, when he arrived at Charlotte Motor Speedway for NASCAR’s longest and most grueling race with just one victory through 14 races.

His 2021 season turned at Charlotte.

Larson dominated the Coca-Cola 600 by leading 327 of 400 laps in Hendrick Motorsports' 269th career victory — pushing HMS past Petty Enterprises for the record.

The victory invigorated Larson and his No. 5 Chevrolet team. The group won three straight Cup races and the All-Star race to gain the needed confidence and momentum for its title run. Larson wound up winning 10 races in all and ultimately his first Cup title.

“That was so cool to get Mr. (Rick) Hendrick that historic win," Larson said of last year's win at the Coca-Cola 600. “It wasn’t spoken about, but I think every team wanted to deliver that win for him and we were fortunate enough to be the ones who did. Hopefully, we can have the same type of performance this weekend.”

But repeating at the Coca-Cola 600 is not easy. It hasn’t been done since Jimmie Johnson won three straight from 2003 to 2005.

NASCAR's longest race already had plenty of pitfalls to begin with — tire wear, attrition and the change in track temperature from day to night — and the new Next Gen car only adds more intrigue. As is, there are concerns if the left rear tires can handle the load of such a long race.

Larson has as good of a chance as anyone to win. Fan Duel Sportsbook has him listed as the race favorite at 5-1.

He has dotted the leaderboard all year, finishing fourth at Bristol and Talladega, and second at Las Vegas and Kansas. He has six top-five finishes in all, but is ninth in the point standings.

“Track position will be important, so a good qualifying session on Saturday helps a lot for Sunday," Larson said.

Maybe it has something to do with that Dale Earnhardt legacy, but Austin Dillon and the black No. 3 Chevy have always run well at the Coca-Cola 600.

Dillon, who won the race in 2017, has finished in the top 10 three straight years.

“I don’t know what it is about Charlotte Motor Speedway. I’ve always had success there,” Dillon said. “I enjoy the track. I understand what it takes to be fast there in a race car and I have a feel for it. Obviously, I won my first Cup race at Charlotte, so I definitely circle it every year as a place where we go and compete well at.”

Kevin Harvick is currently in the midst of the second-longest winless streak of his career at 56 races. His longest streak of races in his Cup career without a win was 115 races from 2007 to 2010.

Before his current winless streak, he went 11 straight seasons (2010 to 2020) with at least one win. Charlotte is a 1.5-mile track and Harvick has struggled on superspeedways, finishing 12th at Las Vegas, 21st at Atlanta and 15th at Kansas.

Ryan Blaney is coming off a bizarre win at the All-Star Race last week which involved an issue with his window net.

Blaney said he has decided to keep the net and wants to hang it somewhere special.

“They said they can get it for me, so I think I will save that one,” Blaney said. “There is a neat story behind it. I am looking forward to getting that and I think I have a decent spot picked out for it right now. Maybe it will move around throughout the years. I am excited to keep that thing.”