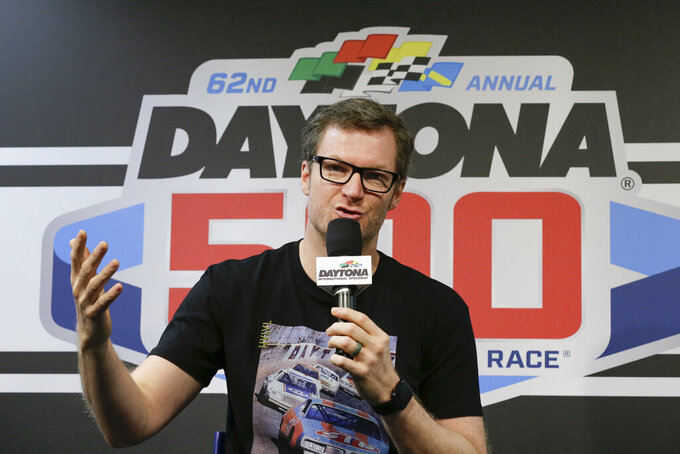 Earnhardt and his crew of storytellers-slash-ghost chasers-slash-racing enthusiasts are filming the second season of “Lost Speedways” at Myrtle Beach Speedway, the South Carolina track where Earnhardt says he learned "to be a racecar driver.” His father had picked Myrtle Beach nearly 30 years ago as the proving grounds to launch his son’s career, and the episode “Goodbye, Dear Friend,” is Earnhardt’s farewell to the speedway that shuttered late last year.

Footage shows a rail-thin 18-year-old who clearly had no idea where his career was headed. Earnhardt was happy racing late models, learning about cars and bartering for dinner with a fellow racer who was sponsored by a fried chicken chain.

“He was shy. He really didn’t want to interact with other people,” track announcer Bill Hennecy says in the episode. “The reason he didn’t interact is because, ‘I’m an Earnhardt. They expect more of me.'’’

All these years later, Earnhardt is still shy.

He’s a 46-year-old married father of two daughters, a NASCAR Hall of Fame inductee and the 15-time most popular driver as voted on by fans. Earnhardt still has social anxiety and was a wreck when NBC Sports launched its NASCAR coverage at Nashville with a heavily promoted pre-race show that featured him alongside country star Brad Paisley.

“I was terrified,” Earnhardt told The Associated Press of the assignment. “But they give me the tools and if I do the work and study and prepare, I can do OK. I can make it work.”

Earnhardt took the NBC Sports job after his 2017 retirement because the network earned his trust during early talks. Earnhardt would be reunited in the booth with his former crew chief Steve Letarte, and NBC Sports executive producer Sam Flood assured him the network had his back.

“Sam told me when he hired me, he said, ‘I’ll never put you in a position to fail,‘” Earnhardt said. “That was such a great thing to hear from somebody. I’m trusting somebody to not put me somewhere I’m not ready. I’ve been in some scary situations but I have the support, and that gives you the confidence to get out there and do things, to put yourself out there, where probably 10 years ago I’d have turned and run away.”

The media industry wasn’t entirely new to Earnhardt: Dirty Mo Media, an original content and production company, began in 2013 with the “Dale Jr. Download” podcast, which now airs on NBCSN and has grown into a valuable forum for the industry. The guests are all chosen by Earnhardt, who treasures their stories and racing lore.

Mike Davis got acquainted with Earnhardt in 2004 as a representative of Budweiser when it sponsored the racer. He is now the managing director of the Dale Jr. Brand, founder of Dirty Mo and co-executive producer of “Lost Speedways” alongside Earnhardt and co-host Matthew Dillner.

Dirty Mo has grown every year and no longer relies on Earnhardt for its best content. Davis said three new shows that don’t involve Earnhardt are presently in production.

Between NBC and Dirty Mo, Earnhardt has a life after racing. He is still the co-owner of JR Motorsports, an Xfinity Series team eyeing a move to the top Cup Series. Even in retirement he is still NASCAR’s top ambassador.

People may expect more from him because he is an Earnhardt and he has delivered in so many ways. He is genuinely passionate about his projects and loves talking racing more than anything. This work doesn’t feel like a job, he said, and he has learned how to deliver for an audience.

Earnhardt said he never greets a podcast guest before the start of a show because he wants the welcome to be authentic when the cameras are rolling.

It’s the same for “Lost Speedways,” a Dirty Mo production and Peacock original. The eight-episode second season debuts Friday and stops include the Daytona Beach & Road Course and Texas World, an episode that featured none other than “Lone Star JR” Johnny Rutherford. NASCAR Hall of Famer Bobby Allison appears in “Engine Wars” at Columbia Speedway in South Carolina.

Earnhardt lets the legends tell the stories. He tries not to learn much about the speedway before he arrives because he wants to see and smell the place, then walk the property searching for any forgotten artifact, scorers book, broken floodlight — anything left behind.

“It’s best for me to learn on camera because that’s when I’m all jacked up, I got the most energy,” Earnhardt said. “If I already knew everything when we got there, I’d be dull and boring.”

Earnhardt is sucked into the history of each track, and when it comes to NASCAR’s earliest days he is fascinated to hear full versions of events long-whispered about, or told in half-truths or exaggerations.

“Sometimes you are in the middle of these shows and you are like ‘Maybe we don’t want to learn what happened. Maybe we don’t need to know. Maybe NASCAR doesn’t want this to be discovered,’” Earnhardt said. “I don’t know if I want to piss off people.”

That’s the part of the new job Earnhardt struggles with most, crossing over from NASCAR ambassador to impartial observer. But he strives to be both genuine and legitimate in his presentations.

The pressures are so different from his driving days. Fellow analyst Jeff Burton assured Earnhardt when he joined the network that it was challenging work in the broadcast booth — but good, bad or indifferent, it is still easier than racing because the show is over when the checkered flag flies.

“Those race cars were hot and miserable and when you didn’t run well, which was more often than not, it was difficult to mentally compartmentalize that, the frustration and failure,” Earnhardt said.

“We don’t take what happens in the booth back home with us like those guys on the track. We aren’t a race car driver who leaves and is miserable for days," he said. "When I retired, that was the one thing I was looking forward to, just walking away from all that pressure. This is a different pressure, and I’m OK with it.”