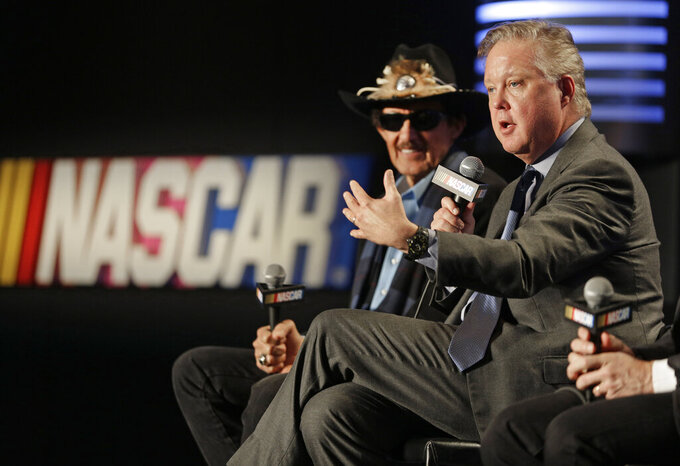 FILE - NASCAR Chairman and CEO Brian France, right, speaks as team owner Richard Petty, left, listens during a news conference to announce a new charter system for team owners in Charlotte, N.C., in this Tuesday, Feb. 9, 2016, file photo. A charter is essentially the same as a franchise and the 36 that exist both guarantee a spot in the 40-car field each week as well as a larger slice of the money NASCAR contractually owes its participants. (AP Photo/Chuck Burton, File)

CHARLOTTE, N.C. (AP) — JR Motorsports has had initial conversations about taking its team to NASCAR's top level, a step up that would be much smoother if it could get its hands on a charter.

A charter is essentially the same as a franchise and the 36 that exist guarantee a spot in the 40-car field each week and a larger slice of the money NASCAR contractually owes its participants. Two charters went off the board this month when Kaulig Racing purchased a pair from Spire Motorsports, a team that bought low and stockpiled when potential owners had little interest in NASCAR.

Interest has exploded with NASCAR scheduled to debut a new, cost-friendly car next season. Three new teams entered the Cup Series this season and Kaulig's pending move from Xfinity to Cup caused the price of charters to skyrocket.

“I heard $10 million, is that what you heard?” JRM co-owner Dale Earnhardt Jr. told The Associated Press. “I'm not paying that.”

How much Matt Kaulig paid Spire is protected in a non-disclosure agreement, but a day after the sale the racing industry was abuzz amid speculation that the current price for charters starts at eight figures.

Spire in 2019 told the AP it paid $6 million one year earlier for its first charter, bought from championship-winning Furniture Row Racing. At the time of purchase it was one of the most valuable charters in the sport because NASCAR's payout structure awards a higher percentage of money to the top-performing teams.

The owners of some smaller teams cashed out last year and few think they got anything like $6 million. Of course, few predicted the market would explode headed into 2022 with the Next-Gen car on the way.

“You have to pay to play, that’s just the way the system works. In the NFL, you have to buy a franchise," said Matt Kaulig, who in six years in NASCAR built a competitive Xfinity Series team that will now move to the big leagues.

But why would Kaulig, founder of the parent company of LeafFilter and Leaf Home Safety Solutions, agree to pay so much?

“Because he wanted them right now,” Earnhardt said. “I don't have a business, I don't have a foundation like he does to be able to make that kind of move. We're a race team that functions off itself so we have to be a little more clever.”

Trackhouse Racing finds itself in the same position as it looks ahead to its second season of Cup competition. Team owner Justin Marks said he lost out on three charters last year; he ultimately leased a charter from Spire to guarantee Daniel Suarez could race each week.

The system rules prohibited Marks from leasing the same charter two consecutive seasons so he is scouring the market to buy. Marks made clear that he won't overpay for a charter.

Spire co-owners Jeff Dickerson and T.J. Puchyr both said Marks knew they were taking offers and moved on without him. Spire plans to field a full-time Cup car next season for Corey LaJoie with its remaining charter but also said the team is right back in the market trying to acquire others.

“Look, they’re running a business. That’s the way they need to run it,” Marks said. “The charter journey has been that. It’s been a journey. It’s an interesting time in the history of the sport with this charter economy.”

Marks is part of a crowded field of prospective buyers. Denny Hamlin launched 23XI Racing this season with Michael Jordan and didn't pay the $6 million for a charter that Spire did two years earlier. Now the team wants to expand to a second car and Hamlin isn't sure if he'd add another team to 23XI without a charter.

He also isn't convinced the market was set at $10 million-plus by Kaulig.

“If it is, we made a hell of an investment last year,” Hamlin said. "We'll see.”

There are four “open” spots in the field each week for teams that don't have charters. The risk is that an open team won't make a race — Suarez drove for a team that did not have a charter in 2020 and missed the Daytona 500 — and won't get a cut of guaranteed NASCAR money.

Marks has done the math and figures Trackhouse can run without the charter. With the Next-Gen coming, Marks predicts there won't be enough cars built in time for Daytona in February for more than 40 entries to show up. Marks also said the return on investment for a charter won't cover the purchase price. Hamlin agreed.

Hamlin said he wasn't in a hurry to spend, either.

“There are many people with their hand on the panic button, but theirs is much closer than mine is to it,” he said.

JTG Daugherty Racing has two cars but only one charter and yet Ryan Preece, who drives the open car, has not missed a race this season and earned a spot in the Daytona 500. Preece is a free agent at the end of the season and not worried about charters.

Notes: NASCAR could repossess a charter from Rick Ware Racing, since the series is allowed to do so if a team is among the three worst charter teams in owner points for three consecutive years. Rick Ware has three charters outright and the No. 51 charter is owned by Richard Petty Motorsports but fielded as a fourth RWR car.