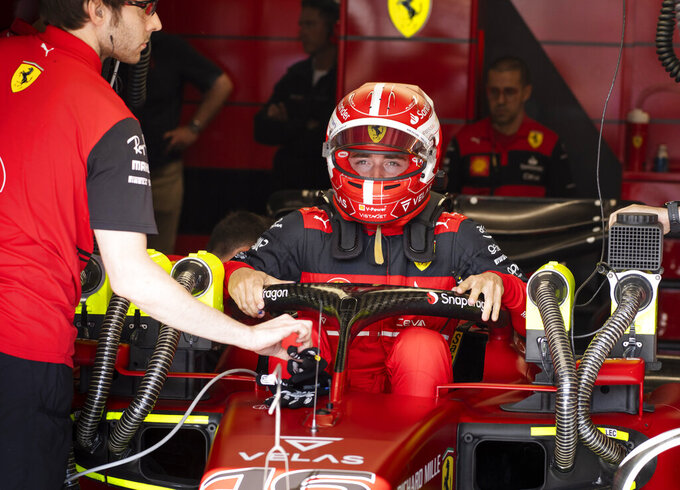 Ferrari driver Charles Leclerc, of Monaco, gets into his car in the garage during the second practice session for the Formula One Canadian Grand Prix auto race in Montreal, Friday, June 17, 2022. (Paul Chiasson/The Canadian Press via AP)

MONTREAL (AP) — Charles Leclerc received a 10-place grid penalty because Ferrari changed his engine ahead of the Canadian Grand Prix.

An engine failure knocked Leclerc out of last week's Azerbaijan Grand Prix while leading and Ferrari has since deemed the engine “beyond repair.” The FIA announced after Friday's second practice that Leclerc had taken his third fresh power plant of the year and would be penalized at the start of Sunday's race.

Speaking ahead of Friday practice, Leclerc admitted his spate of failures this season has left him “not in the best position to be in” as he battles Red Bull teammates Max Verstappen and Sergio Perez for the championship.

Verstappen, winner of five races this season and the current points leader, was fastest in both of Friday's practices in Montreal. Leclerc ended the day second-fastest, just 0.081 seconds shy of Verstappen.

“The pace in general is the positive," Leclerc said.

Leclerc has had a series of setbacks since winning two of the first three races this season to take the lead in the F1 standings. He had early retirements in Spain and Baku and has failed to convert on four consecutive starts from the pole headed into Sunday's race at Circuit Gilles Villeneuve.

Leclerc has dropped to third in the standings, behind both Red Bull drivers.