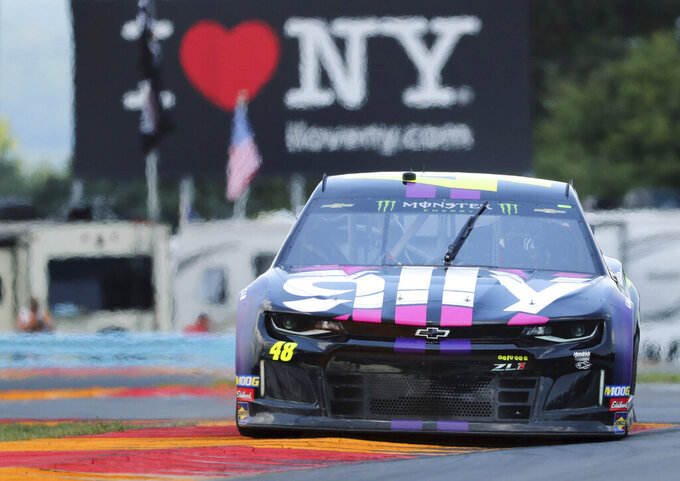 FILE - In this Aug. 3, 2019, file photo, Jimmie Johnson (48) drives through the area of the course called "The Bus Stop" during a practice run for the NASCAR Cup Series auto race at Watkins Glen International, in Watkins Glen, N.Y. Three months after its opening day was canceled by the coronavirus pandemic, Watkins Glen International is hosting car clubs again as NASCAR weekend looms in mid-August. “Everybody is excited about getting back in the saddle. I know we are," track president Michael Printup said. (AP Photo/John Munson, File)

Arizona Diamondbacks reliever Junior Guerra has returned to the team after missing the start of summer camp because of a positive coronavirus test.

Guerra is one of four Arizona players to test positive and had not participated in summer camp since its start last week.

Guerra said his first test for the virus was negative, but his second about 10 days ago was positive. He returned after testing negative twice in 24 hours.

Guerra signed with the Diamondbacks last offseason after spending the previous four seasons in Milwaukee.

Ohio State has paused voluntary workouts by athletes of seven sports on campus after getting the results of its most recent coronavirus testing.

A student that tests positive for COVID-19 will self-isolate for at least 14 days and receive daily check-ups from the Department of Athletics medical staff.

The Seattle Mariners say they had three positive tests for the new coronavirus among 122 Tier 1 and Tier 2 individuals that received initial intake tests before the start of summer camp workouts last week.

The team did not specify whether the three that tested positive were players, coaches or staff.

The Mariners said all three are asymptomatic and are currently quarantined.

Wisconsin says seven of its athletes have tested positive for the new coronavirus since the school started testing them a month ago.

School officials previously had said two tested positive out of the 117 athletes who were part of the initial group of tests. The school now has conducted 428 total tests.

School officials aren’t specifying which sports are affected by the positive tests.

The Ivy League has placed all sports on hold for the rest of the year for its eight schools because of the coronavirus pandemic.

The Ivy League becomes the first Division I conference to make the move, which affects the start of basketball season. The league is leaving open the possibility of moving some seasons to the spring if the virus outbreak is better controlled by then.

The Ivy League also was the first conference to cancel its men's and women's basketball tournament on March 10, just ahead of the quick spread of the virus in the Northeast.

The Detroit Tigers acknowledge an undisclosed number of players on the team have tested positive for the new coronavirus.

Tigers general manager Al Avila said some of them were isolated, retested, and passed protocols to resume baseball activities. Avila said in a statement that those who tested positive "are being closely monitored by our medical staff and we hope to have them back on the field soon.“

Avila added that the team will not identify players who are unable to participate in workouts due to non-work-related injuries.

North Carolina says it has paused voluntary football workouts for at least a week after reporting 37 positive test results for the new coronavirus among school athletes, coaches and staff.

The school announced results Wednesday following 429 tests administered to athletes, coaches and athletics staff as they began returning to campus last month. That followed a plan that included athletes receiving multiple tests and a phased return for the school’s varsity programs running from June through early August.

The school didn’t specify which programs were impacted beyond announcing the pause to football workouts, though it said the Orange County Health Department had identified a cluster of five or more related cases.

Milwaukee Bucks general manager Jon Horst says the group that travels to Florida on Thursday for the resumption of the season at Walt Disney World likely won’t include the team’s entire 35-person traveling party.

The Bucks closed their practice facility in Milwaukee after receiving results of their Friday coronavirus testing. Horst declined to say whether the positive test came from a Bucks player or another member of the traveling party.

The Bucks owned an NBA-leading 53-12 record when play was halted in mid-March due to the pandemic. They return to action July 31 against the Boston Celtics.

NASCAR in August will move its road course race from Watkins Glen in upstate New York because of state health restrictions, and the event will shift instead to the road course at Daytona International Speedway.

The move means the Cup Series will make its debut on Daytona’s road course, which is used by the IMSA sports car series and incorporates part of the famed 2.5-mile oval.

The race on Aug. 16 was a necessary move from Watkins Glen because NASCAR cannot meet New York’s quarantine requirements for out-of-state visitors.

The Baltimore Ravens have informed season ticket holders that their seats will not available this year.

The team says season ticket holders will be offered the same seats in 2021, and money already spent for this season can be used for next year or refunded upon request.

Because of the coronavirus pandemic, NFL games this season are expected to be held without fans or in front of a greatly reduced audience.

According to an email sent Wednesday by the Ravens to the owners of Personal Seat Licenses, the team speculated that stadium capacity -- if fans are allowed -- would be fewer than 14,000 seats per game.

If fans are permitted to attend, seats would be sold on a game-by-game basis with season ticket holders receiving a priority opportunity to purchase in advance of any public sale.

Northwestern’s game against Wisconsin scheduled for Nov. 7 at Wrigley Field is being moved on campus to Ryan Field because of uncertainties due to the COVID-19 pandemic.

Northwestern announced the decision Wednesday after consulting with the Chicago Cubs, state and local authorities and the Big Ten Conference.

Athletic director Jim Phillips cited the possibility of a limited crowd at the famed ballpark even if fans were allowed. He called it “a disappointing conclusion to reach” and said the Wildcats hope to play there again “with a packed house.”

In 2010, Northwestern played Illinois in the first college football game at Wrigley Field since 1938. The Wildcats have since played baseball and lacrosse games there.

Stanford has announced it's eliminating 11 varsity sports programs after the 2020-21 academic year.

The university is the first Power Five school to cut any sports programs. It also said Wednesday that it's eliminating the jobs of 20 support staff as part of the realignment.

Cleveland Indians outfielder Franmil Reyes has been cleared by the team’s medical staff to return to the field after being isolated for attending a party over the July Fourth weekend.

The team kept Reyes away from Progressive Field as a precaution after he attended a holiday gathering without wearing a mask. The Indians learned of Reyes’ off-field actions from social media.

Manager Terry Francona says Reyes was re-tested for the coronavirus and may now participate in training camp. He is scheduled to take batting practice Wednesday and speak to the media on Thursday.

Also, Indians outfielder Delino DeShields Jr., who tested positive for COVID-19, is traveling to Cleveland after he had one negative test. The team says DeShields experience minor symptoms from the virus. He’ll be tested again when he arrives and can rejoin his teammates as long as he doesn’t test positive again.

DeShields is in his first season with the Indians, who acquired him in December from Texas in the trade involving ace Corey Kluber.

The Chicago White Sox are giving fans the opportunity to purchase cardboard cutouts of themselves that will be displayed at Guaranteed Rate Field during the team’s season-opening homestand.

The cutouts cost $49 and will be available while supplies last. Proceeds will benefit the team’s charitable arm.

The White Sox open with a three-game series against the Minnesota Twins starting on July 24.