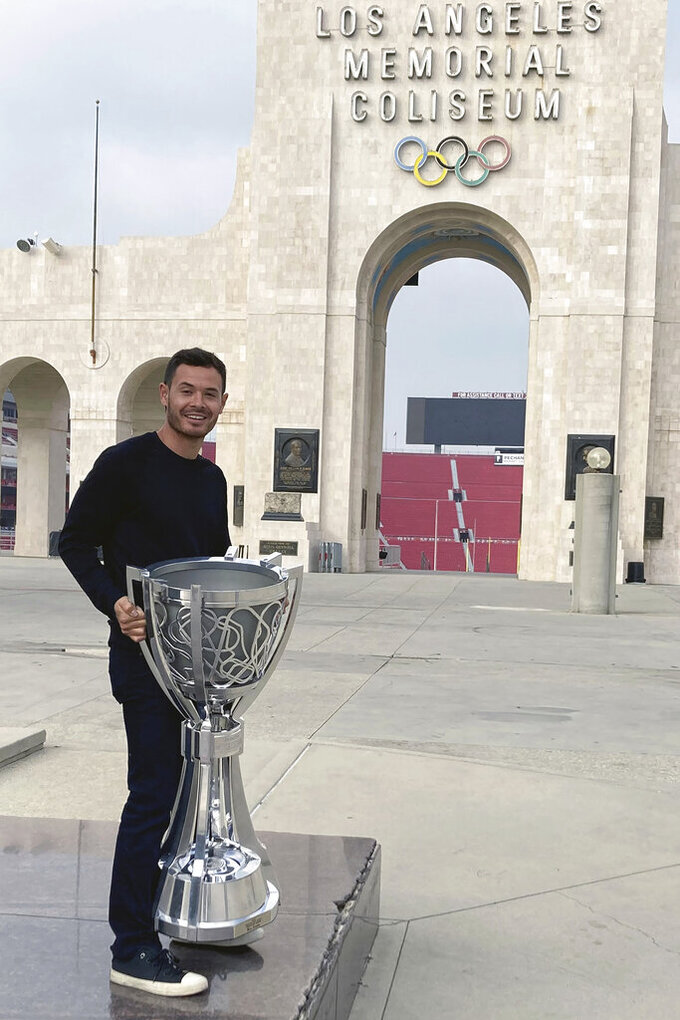 NASCAR driver Kyle Larson poses with the NASCAR Cup Series championship trophy in front of the Los Angeles Memorial Coliseum, Tuesday, Nov. 9, 2021, two days after winning the series championship in Avondale, Ariz. Larson toured Los Angeles Memorial Coliseum on Tuesday, the first driver to get an up-close look at what NASCAR plans when it shifts to the season-opening exhibition Busch Clash Feb. 6 on a purpose-built track inside the Coliseum. Larson, as the champion, is the only driver locked into the field so far.(AP Photo/Jenna Fryer)

NASHVILLE, Tenn. (AP) — Kyle Larson was 18 years old and looking to jump from dirt racing to the big leagues when he went into a meeting at Hendrick Motorsports with childhood idol Jeff Gordon.

“I was like star struck a little bit,” Larson recalled. “We were going to his office and I turned the corner and his supermodel wife was standing there, and she’s like 7-foot tall and beautiful, and I was like ‘Oh, my God, this is crazy.’"

And then Gordon broke Larson’s heart.

“We sat down in his office, and Jeff Gordon is such an awesome race car driver and one I’ve looked up to since I was a little toddler,” Larson said. “Everybody knows I love dirt racing, and he’s like, ‘You really need to get out of dirt cars. They’re going to teach you bad habits.'"

Larson was crushed when he left the meeting and he ended up right down the North Carolina road at Chip Ganassi Racing, where the owner didn't care about Larson's extracurricular racing and signed him on the spot. Larson spent seven-plus seasons driving for Ganassi until he was fired four races into 2020 for using a racial slur. He was suspended nearly all of last year by NASCAR but when it was lifted, Larson's journey with Gordon and Hendrick came full circle.

Larson got his second chance in NASCAR with the team, and Rick Hendrick and Gordon changed their mind about Larson's dirt racing. If it kept him sharp and didn't detract from his job as driver of the No. 5 Chevrolet, then Hendrick would allow Larson to race in other series.

“When you talk to a driver and you know in his heart that it’s really important to him, I told him ‘Look, I don’t want you to get hurt,'" said Rick Hendrick. “He said, ‘It makes me better. It keeps me sharp. I think it helps me in the Cup car.’ So I just agreed to let him do it.”

The agreement led to Larson's first Cup Series title — and record-extending 14th for Rick Hendrick — and one of the most dominant seasons in at least a decade. Larson won 10 races, the $1 million All-Star race and broke Gordon's 20-year mark for most laps led in a season.

“I joke with Jeff about my trip to Hendrick that day,” Larson said. “It all worked out in the end. I got to get experience and they didn’t have to pay for any of it before I got to them.”

Larson spoke ahead of Thursday night's annual season-ending awards celebration for NASCAR in Nashville. The event was canceled last year because of the pandemic when Hendrick driver Chase Elliott won his first title, so the party will be a Hendrick celebration of back-to-back championships.

Larson has enjoyed the VIP treatment and noted NASCAR provided him with both security and a car service to get around Nashville. And as he fulfilled his pre-party obligations, his son Owen was running outside the hotel as Larson's mother-in-law tried to burn off some of the 6-year-old's energy.

Owen Larson has celebrated his father's first NASCAR title as if he's the actual winner; at a parade two weeks ago in Larson's hometown of Elk Grove, California, Owen rode in an oversized shopping cart while his parents and little sister waved to fans from the backseat of a convertible.

Initially nervous he'd be embarrassed by a low turnout for his homecoming, Larson instead had a celebration his family will forever treasure.

“The turnout surprised the heck out of me, it was way bigger that I thought it would be, and Audrey and Owen had a blast,” Larson said. “You know, Owen thinks he's famous. He jokes with me that he's more famous than I am.”

The crowd on Lower Broadway for Wednesday night's burnout competition would disagree. Larson received a raucous ovation during the contest, and with his own father riding as passenger, they gave a nod to Larson's signature celebration in dirt racing: Mike Larson held a steering wheel out the window as Larson dazzled fans lined five-deep along Nashville's entertainment strip.

He says he doesn't feel any different as champion, and aside from all the celebrations, life is pretty much the same as usual for a humble driver who just capped a remarkable comeback season. Still, after a stop at the Urban Youth Racing School in Philadelphia next week, Larson and wife, Katelyn, will head to Abu Dhabi to attend their first Formula One race. It's the title-deciding season-ender, and Larson seemed quite excited to be attending as the NASCAR champion.

The Larsons spent almost all of 2020 traveling the country in a motorhome as the family went from small rural track to small rural track during his suspension. But he's now straddling two worlds — champion of America's top motorsports series and grassroots racer who still prefers three nights in the dirt at Knoxville Raceway in Iowa over three nights at, say, Nashville Speedway.

In the end, Hendrick Motorsports reversed the policy that had kept Larson from landing a job with the team in 2012. Larson was allowed to race as much as he wanted — he did cut back his schedule during NASCAR's 10-week playoffs — and his Hendrick teammates all received permission to play around in other series.

He's on top of the racing world right now — at just 29 years old — but doesn't believe he'll appreciate what it means for several decades.

“I understand the season that we’ve had. But I don’t think you really can appreciate it until you hear other generations talking, generations that are younger than me talking about a season like I’ve had,” Larson said. “I think I’m just a very lucky guy who gets to race in the best race cars.”