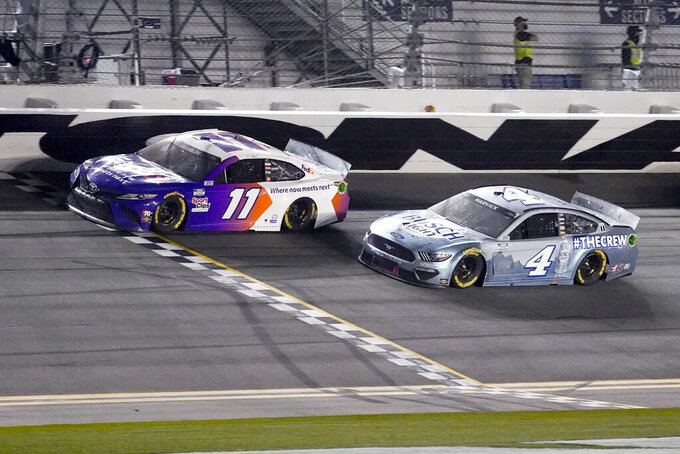 Not bad for most drivers.

For Hamlin, the result in a race he largely dominated meant he lost his shot at history: No driver has ever won three straight Daytona 500 championships. Hamlin paired the 2019 and 2020 Daytona victories with his 2016 win to thrust himself in the conversation as one of the best drivers to conquer “The Great American Race.”

“Our car was fast and we were certainly making it look easy there for a while,” Hamlin said.

Hamlin — who teamed with Jordan to launch 23XI Racing this season with Bubba Wallace as the driver — again was the driver to beat in the No. 11 Toyota. The Joe Gibbs Racing driver swept the first two stages and had Wallace along for the ride, trying to push his boss back into victory lane.

Hamlin, the 8-1 betting favorite was fifth for the highest finish of a Toyota driver. Michael McDowell crashed the field as a 100-1 long shot to win his first career Cup race in the Daytona 500.

Falling short in a bid for three straight stung Hamlin.

“I'm certainly disappointed," Hamlin said. “We had a dominant car. We won stages and led a lot of laps."

Hamlin, now 40 and beginning his 16th season with Joe Gibbs Racing, has made significant strides to leave his mark on NASCAR. His 44 career victories tie him with Bill Elliott, the Hall of Fame driver and Hamlin’s childhood idol.

Perhaps the best active driver to never win a NASCAR championship, Hamlin stamped his name in Daytona 500 history when he became the fourth driver to win the race in consecutive seasons. Richard Petty did it in 1973-74; Cale Yarborough in 1982-83; and Sterling Marlin in 1994-95.

Hamlin won both of the opening stages and led a race-high 98 of 200 laps until pit strategy derailed his night. The Ford drivers pitted first as a group, followed by the Chevrolets a lap later and finally the Toyotas.

The Toyotas had only five cars and were unable to team up and take out the Ford drivers who ran out front.

“I don't know what we could have done different,” Hamlin said. “Our fate was sealed when we got shuffled there and everyone committed to go single file until the last lap.”