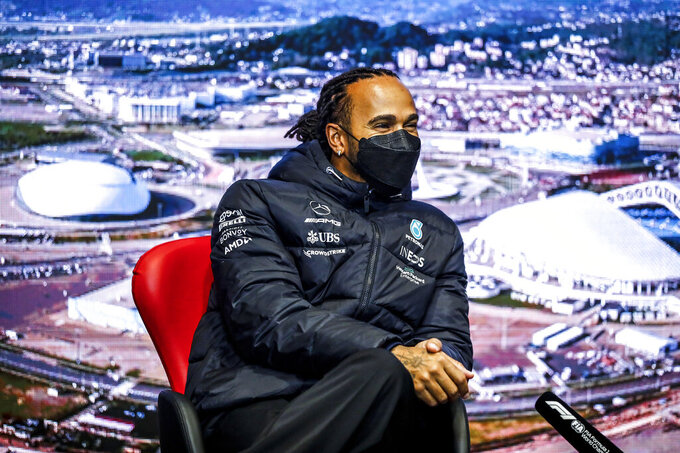 Britain's Lewis Hamilton of Mercedes attends the press conference at the Sochi Autodrom circuit, in Sochi, Russia, Thursday, Sept. 23, 2021. The Russian Formula One Grand Prix will be held on Sunday. (Joao Filipe/DPPI, Pool via AP)

SOCHI, Russia (AP) — Lewis Hamilton and Max Verstappen traded verbal blows at the Russian Grand Prix on Thursday, less than two weeks after a crash which knocked both of the Formula One title rivals out of the last race.

Seven-time champion Hamilton suggested Verstappen was feeling the pressure of fighting for what would be his first title.

“I’m so nervous I can barely sleep. It’s so horrible to fight for a title, I really hate it," he deadpanned. “Those comments, it just shows you that he doesn’t really know me, which is fine. I also don't need to know him, how he is fully, but I just focus on myself and I really enjoy it out there in front.”

The rivals collided halfway through the last race in Italy, allowing Daniel Ricciardo to claim a surprise win for McLaren. Mercedes team principal Toto Wolff credited the protective “halo” device around Hamilton’s cockpit with saving his life after Verstappen’s car bounced over his head. Verstappen has a three-place grid penalty in Russia after he was blamed for the crash — “Not ideal, but not the end of the world,” he said.

The day after the crash, Hamilton attended the Met Gala in New York. He credited yoga and acupuncture with helping him to recover from neck pain sustained in the crash and said in Russia he was feeling fine.

“It's natural that when a car lands on your head, you're going to have some sort of discomfort,” Hamilton said. “I didn't say I was dying. Of course, aware of the fact that just in a millisecond anything can happen, and so I did feel grateful to come out of it not badly injured.”

It was the second time the two drivers clashed this year after a similar incident at the British GP. On that occasion, Verstappen ended up in the hospital. Hamilton got a 10-second penalty but still went on to win the race.

Verstappen has a five-point lead over Hamilton in the championship. It's not clear how many races remain, either seven or eight, because one venue still hasn't been confirmed for an open slot on Nov. 21. Verstappen has managed to carve through the field before in Sochi after grid penalties, rocketing from 19th to fifth within the opening eight laps of the 2018 race.

Mercedes drivers have won all seven races at the Olympic Park circuit, with four wins for Hamilton.

Rain is forecast in Sochi for Saturday qualifying and the race on Sunday. It could shake up the action at a track where it's tough to overtake, perhaps helping Verstappen overcome his grid penalty.

“I'm looking forward to it because it looks a bit rainy for most of the weekend. So, who knows, maybe that can swing a few surprises as well,” Verstappen said.

No one wants a repeat of last month's Belgian GP, when a downpour restricted the race to two laps behind the safety car, prompting anger from fans.

LECLERC AT THE BACK

Charles Leclerc will start at the back of the grid after Ferrari swapped out his engine for an upgraded power unit.

Ferrari said the new engine helps it develop next year's car and Leclerc got the swap first because a battery pack in his old unit was damaged in a crash at last month's Hungarian GP.

It's been a frustrating season for Leclerc. He last won in 2019 and has finished on the podium just once in the last 27 races. His best shot at a win was derailed when his car broke down before the start at his home race in Monaco after he'd qualified on pole.

No date has been set for Leclerc's teammate, Carlos Sainz, to get the upgrade. “That will be decided following an evaluation of the right compromise between competitiveness and the impact of the penalty,” Ferrari said.

It's the first race since four-time champion Sebastian Vettel renewed his contract with Aston Martin for 2022. “The spirit in the team is great, I like the guys,” the German said on Thursday. “Morale in the team is high." Haas also confirmed Thursday it will keep Mick Schumacher and Nikita Mazepin for 2022.

There are relatively few driver switches next year. George Russell is replacing Valtteri Bottas as Hamilton's teammate at Mercedes, with Bottas going to Alfa Romeo and Alexander Albon moving into Russell's seat at Williams. Teams are keen to keep experienced drivers because there are wide-ranging rule changes affecting car design for next season.

This story has been corrected to show seven or eight races remain in the season, not five, and Met Gala was a day after Italian GP not two.