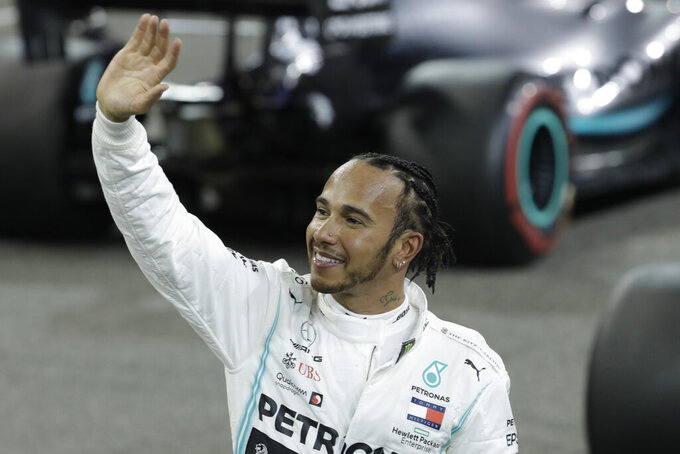 ABU DHABI, United Arab Emirates (AP) — A laughing Lewis Hamilton did little to quash rumors of a potential move from Mercedes to Ferrari by acknowledging he was flattered by comments from the Italian team principal.

Mattia Binotto called the six-time world champion “an outstanding driver” on Friday and then added “knowing that he’s available in 2021 can make us only happy.”

Hamilton is one of several F1 drivers, including both current Ferrari drivers, whose contracts expire at the end of next year. This has only fueled speculation that there could be a significant shake-up ahead.

“I think it’s the first compliment I’ve had from Ferrari in 13 years ... Thank you. I’ll take it,” Hamilton said, laughing, when responding to Binotto’s open flattery. “It’s taken all these years for them to recognize me. I’m grateful ... It’s positive. I think it’s never a waste of time to ever be nice to someone.”

The 34-year-old British driver, who reportedly earns more than $50 million a year at Mercedes, was pressed further as to whether he would be interested in moving to the famed Italian team.

“(Ferrari is) a team I’ve always appreciated. To earn the respect from them is obviously very high up, is not a bad thing,” Hamilton said after taking a record-extending 88th career pole position for the Abu Dhabi Grand Prix on Saturday. “Who knows what the driver market’s going to be doing over the next year? (But) if I’m really honest, I’m not really focused on that right at this second.”

Binotto also said “honestly it’s too early for any decision.”

But Vettel, who joined in 2015, has so far failed to deliver Ferrari its first drivers’ title since Kimi Raikkonen in 2007 and the famed Prancing Horse team has not worn the constructors’ crown since 2006.

By contrast, Mercedes has won six straight doubles since team principal Toto Wolff and Hamilton joined the Silver Arrows together in 2013 — an inspired move which has helped Hamilton add five F1 titles to his first with McLaren in 2008.

“I am totally relaxed about the situation,” Wolff said when asked about the speculation linking his star driver to Ferrari. “I am absolutely open to everybody exploring options. If the relationship ends one day, I would be the first one to cheer (wish him luck).”

Wolff added that “conversations are going to begin” with Hamilton over a potential new contract, without giving details as to when.

He would not be drawn into whether Red Bull driver Max Verstappen — who has won three races this season and eight overall — would be a suitable replacement if Hamilton does join Ferrari.

“We will not embark on a potential fishing mission before Lewis and I have a discussion,” Wolff said.

Mercedes driver Valtteri Bottas, who has won four races and taken five pole positions this season, and the 22-year-old Verstappen are also yet to sign contracts beyond 2020.