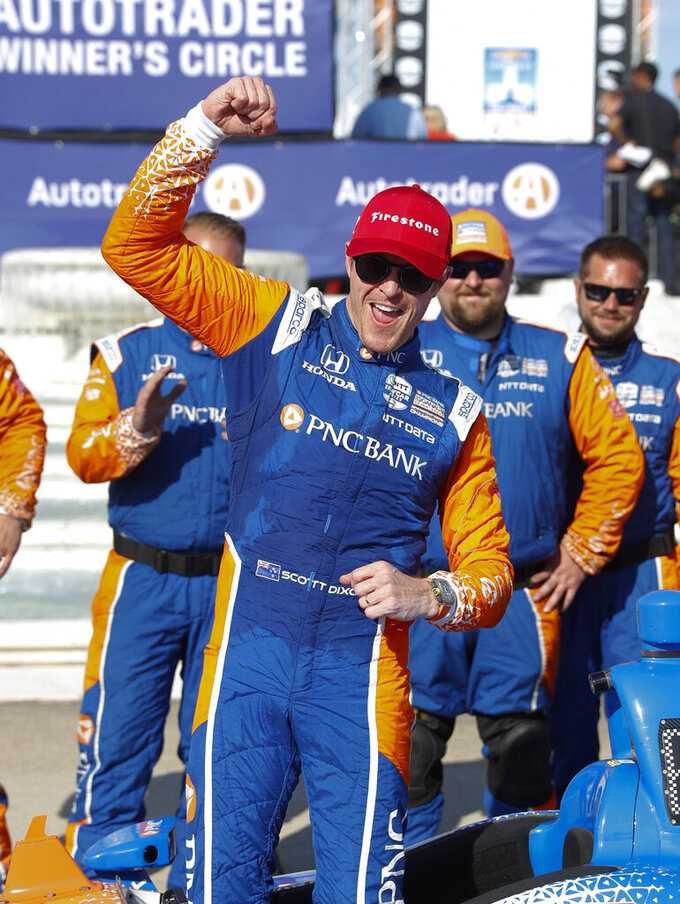 FORT WORTH, Texas (AP) — Scott Dixon almost lapped the entire IndyCar field at Texas last year, dominating like he did in a 2015 victory at the high-speed oval.

"The car was just on rails," Dixon said. "You can hit here, or you can miss it big. When you miss it big, it's one of the longest nights you'll ever have."

There have been a lot more hits than misses for Team Penske at Texas, where Roger Penske drivers have won 13 of the last 18 races. Dixon has three of those wins. He was also the runner-up four times, and has five other top-five finishes in his 19 starts at the track.

Each time Dixon has won the Texas race in the middle of the season, he has gone on to be the IndyCar Series champion the same year.

"We'll take it if we win," said Dixon, who has won five series titles overall, but never in consecutive years. "But then if we don't, we'll go the other way. We've won the other way."

Dixon will start the race from the second spot, on the front row with polesitter Takuma Sato after they were the only drivers with two-lap averages over 220 mph during qualifying on Friday.

Texas is at the midpoint of the 17-race IndyCar season — with eight races completed, and eight more after Saturday night's race at the 1 1/2-mile track.

"This race always is very important. Detroit, and Texas is a pivotal moment of the season where you establish yourself in the hierarchy," Indianapolis 500 winner Simon Pagenaud said. "There's still a lot of races to go afterwards where things could swing. You leave Texas in the top three, you're going to be contending for the championship."

Josef Newgarden, a Penske driver and two-time winner this season like Pagenaud, goes into Texas as the series points leader. Newgarden is 15 points ahead of Andretti Autosports driver Alexander Rossi, and 25 in front of Pagenaud. Dixon is fourth, 52 points out of the lead.

Newgarden suffered a broken collarbone in a 2016 crash at Texas, when he finished second to last in the field in a race that was initially postponed, then suspended because of rain before being resumed 11 weeks later. He had another crash in 2017, but last year started on the pole and led 59 laps before finishing 13th.

"There's a couple of tracks for me that are on the calendar every year that I say it's going to turn around at one point," Newgarden said. "St. Pete, the season opener, was one of those places where I've gone there every year with high hopes to start the season well, and it's never gone well, and we finally won there this season. So I have that same confidence going into this track."

That opener was one of two wins this season for Newgarden, the points leader for all but one week in 2019 — when he dropped to second after a fourth-place finish at Indy. He got back on top after winning the first of two races last weekend in Detroit.

Dixon won the second Detroit race last Sunday, a day after he completed only 23 of 70 laps before a crash that led to a last-place finish in the first race there.

"That's Scott Dixon, man. ... The next day he recovered the best way to win it. That's what a champion is," Pagenaud said.

"You never want to finish last, in a situation like that just because it's such a big point shift, and Josef winning in the same race definitely opened up the points there," Dixon said. "But going, I think, from 93-point deficit to just over 50 put us back in the game.

"This is definitely the portion of the year that becomes very tough and maybe sometimes defines whether you're going to be competing at the end of the year for another championship," he said. "So I think it could be one of those turning points."