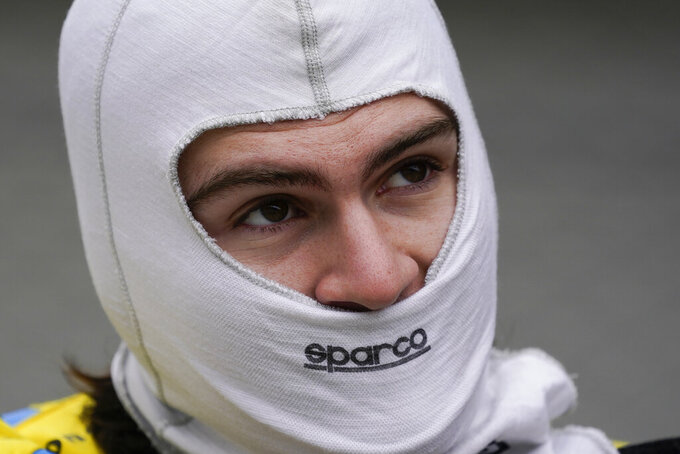 ST. PETERSBURG, Fla. (AP) — This new IndyCar season, so full of promise as fans return to races and with a field from first to last that's tighter than ever, took a familiar turn when the Herta kid put it on the pole at St. Petersburg.

It was Colton Herta, the 21-year-old second-generation driver, who edged out his rivals for the top starting spot in Sunday’s race on the 1.8-mile downtown temporary course that runs along Tampa Bay.

Herta is a legitimate title contender and part of a youth wave leading a changing of the guard in IndyCar. And yet this pole-winning run came 16 years after his father, Bryan, won the pole at St. Petersburg. Colton Herta now has five career poles, four at the same tracks where Bryan also won poles: St Pete, Laguna Seca, Portland and Mid-Ohio.

“It’s cool to kind of carry on the legacy as best I can, more importantly getting the job done for myself and my team,” he said.

Team owner Michael Andretti this year moved Bryan Herta to the No. 26 Honda as the race strategist for his son for the first time in IndyCar. The pairing of fathers and sons has not often worked at this level — it failed most recently with both Michael and Marco Andretti, as well as Bobby and Graham Rahal — but the Hertas are giving it a go.

“I'm excited obviously for my dad to be on the car. That was the first pole he shared with me,” Colton Herta said. “He was super excited about it.”

The two don't have much race work together yet. The run Saturday helped Herta bounce back from a disappointing IndyCar opener when Herta was enveloped in a first-lap crash last weekend in Alabama.

His pole-winning run put Herta at the front of a field separated by just 0.17955 seconds from first to 24th in qualifying.

“Such a hypercompetitive field we have this year,” Herta said. “Extremely competitive.”

Newgarden, a two-time IndyCar champion, has shaken off the uncharacteristic accident. But Newgarden finished second in the title race last year, Herta third, and the drivers are both 22nd and 23rd in the standings. Ryan Hunter-Reay, also collected in last week's crash, is last in points.

“It certainly wasn’t a fun mistake. You make an error, you fly off the track, it just affects you,” Newgarden said. "It’s a harder pill to swallow when it’s first lap right in front of a pack, then you just kind of take out a couple of guys that were innocent bystanders. That’s just not a fun one to have go down. I don’t really remember the last time I’ve had a moment like that, to be honest with you.

“For me, I stew on it for 24, 48 hours. This one was a little bit longer. Then I put it on the shelf and we’re back racing again. You have to focus on the next thing.”

Simon Pagenaud qualified fourth behind Team Penske teammate Newgarden, while Sebastien Bourdais, a St. Petersburg resident and two-time winner of the race, was fifth. Pato O'Ward rounded out the Fast Six after winning the pole for the season opener.

Team Penske has signed Will Power to a contract extension that takes him at least through 2023 and crosses one of the names off of Roger Penske's to-do list.

Pagenaud is also in a contract year for Penske's IndyCar team, as is Brad Keselowski on the NASCAR side. Keselowski last year signed a one-year extension that put him right back into another round of negotiations.

But in IndyCar, both Power and Pagenaud went into the year as former Indianapolis 500 winners and series champions hoping to continue at Team Penske. It expanded this year to four cars to include rookie Scott McLaughlin. Penske typically prefers to run three-car operations.

Power has 39 career victories and is six pole positions away from tying Mario Andretti’s record of 67.

"I really love being with the team and they've been very loyal to me," Power said.