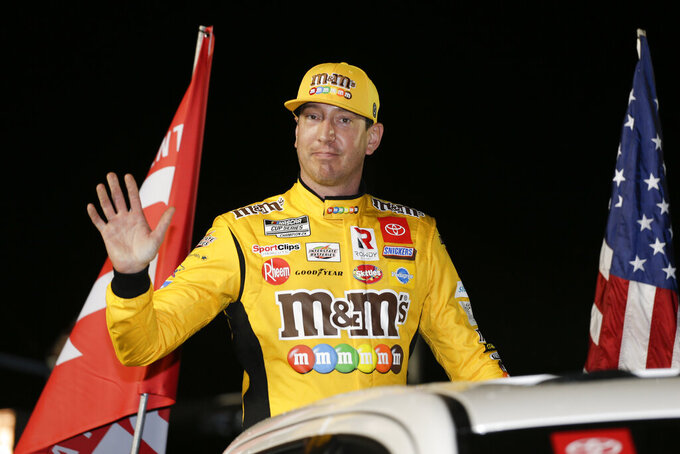 FILE - In this Feb. 13, 2020, file photo, Kyle Busch waves to fans during driver introductions for the first of two Daytona 500 qualifying auto races at Daytona International Speedway in Daytona Beach, Fla. NASCAR champion Busch plans to literally will sprint back into competition when the season resumes by running all seven of the events scheduled over an 11-day span. (AP Photo/Terry Renna, File)

CHARLOTTE, N.C. (AP) — NASCAR champion Kyle Busch will sprint back into competition when the season resumes by running all seven races that have been scheduled over an 11-day span.

Busch will drive his No. 18 Joe Gibbs Toyota on Sunday when the Cup Series season resumes at Darlington Raceway then again next Wednesday when the series returns to the South Carolina track. He will also run at Charlotte Motor Speedway on May 24 and May 27.

In between, Busch will run for JGR in the Xfinity Series race next Tuesday at Darlington and again at Charlotte on May 25. He also will race in the Truck Series at Charlotte for Kyle Busch Motorsports for a scheduled 1,100 miles over three days.

His calendar includes all seven of the initial races NASCAR has rescheduled in its return from the pandemic shutdown, spokesman Bill Janitz confirmed Thursday.

Busch was not originally scheduled to race the truck race at Charlotte because he was ineligible as it was designated part of a NASCAR challenge. That's been altered and Busch can now compete.

The Xfinity Series race at Darlington replaces the event at Chicago Busch was scheduled to race this summer. The Chicago race has been canceled.

NASCAR rules limit Busch to just seven Xfinity Series and five Truck Series appearances per season, restrictions he is unhappy with. A year ago, Busch won all five truck races he entered and four of the seven races in the Xfinity Series.

He also added a second Cup championship for Gibbs in a five-win season.

A truck victory at Las Vegas is Busch's only win so far this season and he's ranked 12th in the Cup standings. Busch had a pair of top-five finishes through the first four NASCAR events before the season was suspended.