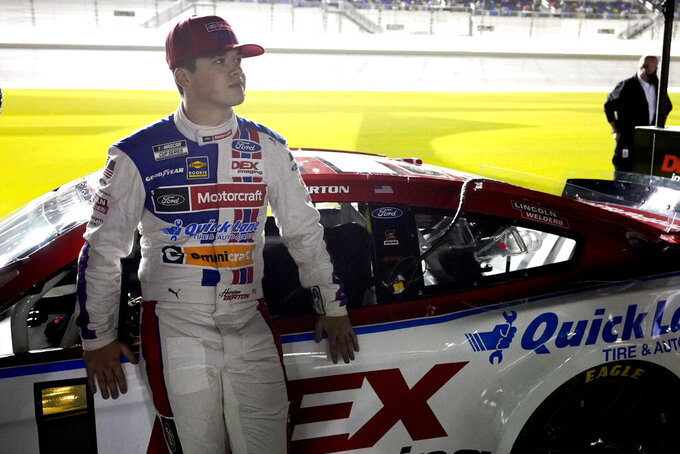 Burton topped only 20 drivers who decided to take NASCAR’s new car on the track for the final warm-up for “The Great American Race.” With inventory lacking ahead of the car’s debut, some elite teams stayed in the garage: Joe Gibbs Racing, 23XI Racing and RFK Racing were among five teams that sat out.

Ford drivers continued to have a strong week in the lead-up to Sunday’s race at Daytona International Speedway.

Burton said he knew the real test was ahead.

“The real big pack is always different than a pack of four,” he said.

Jacques Villeneuve, the former Formula One champion and Indianapolis 500 winner, had limited practice time when an engine change was needed in the No. 27 Chevrolet. Villeneuve would normally drop to the back of field because of the change, but he had already qualified 40th. The 50-year-old Villeneuve posted the fastest time of the six cars eligible in time trials to earn a spot in Sunday’s field.

NASCAR also confiscated wheels Friday from Team Penske and RFK Racing and the teams could be penalized next week if infractions are found.

The Ford camp has its strategy figured out for Sunday, when all its drivers are expected to work together to ensure a blue oval makes it to victory lane. That’s proven to be the most effective approach among the manufacturers, but it’s more important than ever this year as Sunday marks the debut of NASCAR’s Next Gen car.

“It’s a big change for the sport, to go from cars that they knew so well and rooms and shelves full of parts that they knew and almost an endless supply of those parts, and the freedom to go — if you lost a car in the Duels or the 500, you don’t worry about it, you’ve got enough cars back in the shop,” said Mark Rushbrook, global director of Ford Performance Racing.