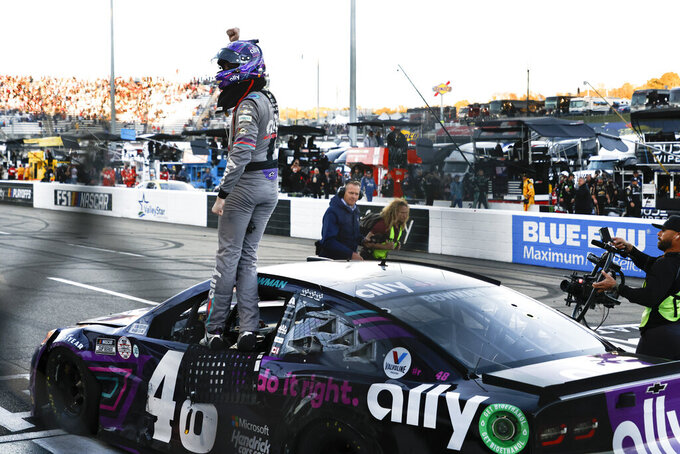 CHARLOTTE, N.C. (AP) — Alex Bowman had barely finished his post-victory obligations and his online merchandise store was already taking orders for a simple black T-shirt with the word “HACK” printed across the front in block purple letters.

If a star of the sport is going to call you a hack on live television — twice, with a pair of curse words sprinkled in — might as well make some money off of the episode.

Bowman infuriated championship contender Denny Hamlin with six laps remaining Sunday at Martinsville Speedway when he spun Hamlin out of the lead. It sent the race into overtime, which Bowman won for his fourth victory of the season. Hamlin then blocked Bowman's car on the frontstretch to prevent a proper celebration.

It was Hamlin's post-race assessment of Bowman that really irked the folks at Hendrick Motorsports. Bowman has insisted the contact that spun Hamlin from the lead was accidental, but Hamlin still attacked Bowman's talent level.

“Look, he’s won four races this year. Denny’s won two,” team owner Rick Hendrick said Tuesday. "I think Denny just lost it Sunday. Alex races everybody clean. He’s a good soldier. The sponsors love him. The crowd loves him. I think when you’re in the middle of a disappointment and you’re frustrated and mad, you might say things that you wouldn’t say normally.

The championship will be decided Sunday at sold-out Phoenix Raceway, where Hendrick has two of his four drivers into the winner-take-all finale. Reigning Cup champion Chase Elliott and title favorite Kyle Larson in a pair of Chevrolets will square off against Toyotas driven by teammates Hamlin and Martin Truex Jr. of Joe Gibbs Racing.

So in that regard, Hamlin was somewhat correct when he said Bowman “gets his ass kicked by his teammates every week.” Bowman, who was eliminated from the playoffs at the end of the second round, didn't really deny that part of Hamlin's critique.

“These last couple months have been painful. It’s been so frustrating. Honestly, our teammates have kicked our butts for quite a while now,” he said.

But that discredits how far Bowman has come since he sat out most of 2016 and 2017 because he was tired of driving underperforming cars and wanted to work his way in with a powerhouse team. He got a break with Hendrick Motorsports in 2016 when he drove 10 races as the injury replacement for Dale Earnhardt Jr.

He spent most of 2017 testing and doing simulator work for Hendrick, then was named the replacement for Earnhardt when he retired ahead of the 2018 season. Bowman drove on a series of short-term contracts but built a following, won a pair of races and scored the first major sponsor of his NASCAR career.

Ally was captivated by the 28-year-old and wanted Bowman to move into the No. 48 to replace seven-time champion Jimmie Johnson this season.

Bowman has delivered: His four victories, eight top-five finishes and 16 top 10s are all career bests, and Bowman was given a two-year contract extension through the 2023 season in June.

“If that's what you want to call him, he's the best damn hack I've ever seen drive a car,” Jarrett said.

Andrews is part of the weekly competition meetings at Hendrick and sees Bowman interact with his teammates and the executive leadership team. Just because he didn't make it to the championship four does not diminish what Bowman and crew chief Greg Ives have accomplished this season.

“By any stature in this sport, by any race team, whether you’re in the championship four or not, we are super proud of what Greg and Alex have done this year,” said Andrews, who added Bowman could pick up his fifth win of the season Sunday at his home-state track.

The Tucson native earned his first career Cup pole at Phoenix in his first race driving for Hendrick in 2016. He led 194 laps that day before finishing sixth and would love his first career win at home. He desperately wants to build consistency and find a way to contend for the title alongside his teammates.

For now, he's committed to donating proceeds from the sale of the “HACK” shirts to local animal shelters — that's been his charitable cause — and move on from his tussle with Hamlin.

“I don’t like drama. I’m pretty shy and keep to myself, do my own thing. This isn’t the most comfortable situation for me,” Bowman said. “I think the last thing (Hamlin) wants is for us two to continue anything next week.”

Even as Bowman attempts to quash this beef with Hamlin, he understands highlights of their Martinsville tangle will follow both into next year.

“Big picture, at the end of the day, we're not really race car drivers at some point ... we’re entertainers,” Bowman said. “Whether you loved it or hated it, you’re mad about it, you’re jumping for joy, a lot of people were probably pretty dang entertained. Hopefully it’s good for the sport. I think rivalries are good for the sport.”