NASCAR strikes $2B deal with ISC, will gain a dozen tracks 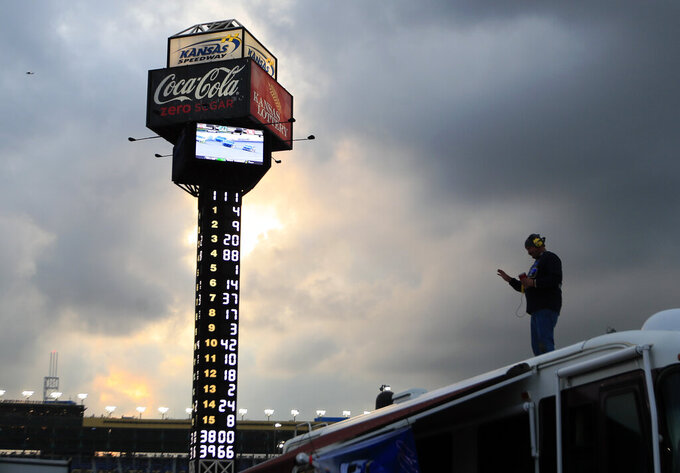 A fan follows events from the roof of a camper during the NASCAR Cup Series auto race at Kansas Speedway in Kansas City, Kan., Saturday, May 11, 2019. (AP Photo/Orlin Wagner) 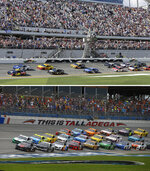 NASCAR announced the $2 billion purchase of International Speedway Corp. on Wednesday, an aggressive move to gain control of key racetracks and set itself up for sweeping changes that could save America's most popular racing series.

The deal is expected to close by the end of the year.

Gaining control of a dozen tracks, along with Iowa Speedway, which it already owns, would seemingly make it easier for NASCAR to alter its racing schedule, including the possibility of fewer events.

NASCAR President Steve Phelps has made it clear that the 38-race schedule in the top-tier Cup Series, generally considered too taxing for teams and fans, is among the areas the sanctioning body is looking to change. Seven of the ISC tracks host not just one Cup Series race each season but two.

NASCAR's five-year agreement with tracks ends after the 2020 season.

"We are pleased with the progress that the negotiation and execution of the merger agreement between NASCAR and ISC represents," NASCAR said in a statement. "While important regulatory and shareholder approval processes remain, we look forward to the successful final resolution of this matter and continuing our work to grow this sport and deliver great racing experiences for our fans everywhere. With a strong vision for the future, the France family's commitment to NASCAR and the larger motorsports industry has never been greater."

The agreement is the latest makeover for NASCAR as it scrambles to win new fans and end a decline in attendance and ratings. And more deals could be on the horizon.

"I would certainly be worried if I was any of the tracks that aren't part of the deal," said Victor Mathewson, a sports economics professor at Holy Cross. "My guess is NASCAR will put an emphasis on the tracks it owns rather than the ones it doesn't. Given the decline over the past couple years, I wouldn't be surprised if they cut some venues from the schedule and some of those tracks could be on the outside looking in."

The parent company of Speedway Motorsports made an offer last month to acquire all its outstanding common stock, which would privatize SMI and make it better positioned for an anticipated NASCAR overhaul.

Bruton Smith is the founder and majority stakeholder in SMI, which operates eight tracks that host NASCAR Cup Series races. Smith and his family also own Sonic Financial Corp.

In a letter Sonic sent to the SMI board of directors last month, the company noted: "NASCAR racing has faced several challenges in recent years, and the company has been impacted by these challenges. NASCAR has indicated the sport would benefit from structural change."

If the ISC and SMI deals go through, NASCAR's main two track operators would become private companies, easing any restructuring of the stagnant series founded by Bill France Sr. in 1948.

His grandson, Brian France, served as CEO from 2003-2018 and made radical changes to the playoff system, approved a new car and stage racing, pulled NASCAR out of some of its traditional markets for big city exposure and, along the way, managed to alienate a chunk of the series' aging fan base. He showed little interest in calls for a condensed season, shorter events, weekday races and a greater variety of tracks even as NASCAR spent much of the last decade unable to retain fans amid an exodus of top sponsors.

The turmoil had many wondering if NASCAR was for sale, but the France family has suggested that is not necessarily the case. Jim France said before the Daytona 500 in February "this sport was built by families and we're just a part of it. It's so important that we remember that this is still a family business. Our family is committed to it."

At the very least, the move will make it easier for NASCAR to make changes out of the public eye — and away from shareholders.

"I think if both go through the bottom line, they may try to cut some expenses out of the business and then streamline additional economics out by negotiating for things like advertising or sponsors together," said Jaime Katz, a senior analyst at Morningstar. "All this has been separated before."

Many big sponsors have left NASCAR in recent years — Cup Series title sponsor Monster Energy is in the final year of its deal — and television ratings hit all-time lows at 26 events last season.

Since NASCAR is private, it won't have to publicly report attendance revenue and other financials like ISC had to do as a publicly traded company. Stockholders would receive $45 per share under the agreement.

"As the businesses have collaborated a little more closely recently, they realize they may need to work together with some initiatives to elevate the business," Katz said. "It makes sense that the France family and NASCAR should be able to make better deals themselves rather than if stockholders were in the mix."