Man of Speed: Diffey to call Olympic track and field for NBC 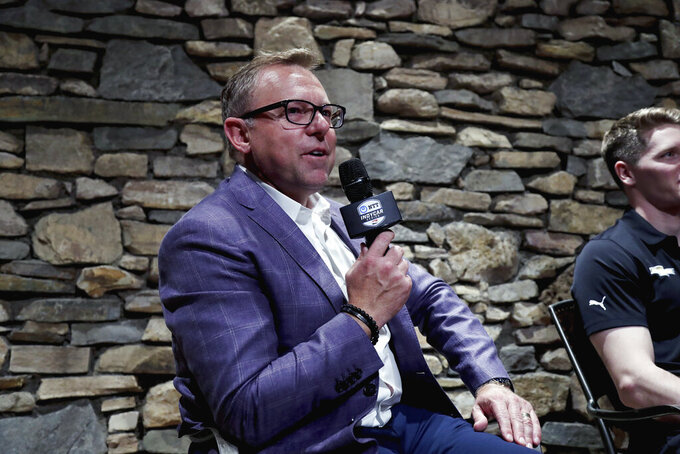 This photo provided by IndyCar shows Leigh Diffey at an IndyCar Series race in Monterey, Calif., in a Sept. 18, 2019, photo. Leigh Diffey has been stereotyped, if you will, as the speed guy at NBC Sports. He's the lead announcer for this weekend's Indianapolis 500 and most of his network involves sports that go fast. His next assignment has Diffey covering the fastest athletes in the world. The 50-year-old Australian has been named play-by-play announcer of NBC Olympics’ track & field coverage for the upcoming Tokyo Olympics. (Joe Skibinski/IndyCar via AP)

INDIANAPOLIS (AP) — Leigh Diffey has been stereotyped as the speed guy at NBC Sports. He is the lead announcer for this weekend's Indianapolis 500 and most of his network assignments involve sports that go fast.

His next gig has Diffey covering the fastest athletes in the world. The 50-year-old Australian has been named play-by-play announcer of NBC Olympics’ track and field coverage for the upcoming Tokyo Olympics.

Diffey takes over for Tom Hammond, who had called Olympic athletics for the network from 1992 through 2016.

“They don't label me as the racing guy or the speed guy, but I am,” Diffey told The Associated Press on Tuesday. “Anything that has to do with racing, I do, and I love that.”

The Tokyo Games will be the fourth Olympics assignment for Diffey, who called bobsled, skeleton, and luge at Sochi and PyeongChang, then picked up rowing in 2016 in Rio. Diffey has also called track and field events for NBC Sports since 2013 that have included the 2019 World Athletics Championships and U.S. nationals.

His full-time job with the network is the motorsports beat and Diffey does play-by-play for IndyCar, IMSA sports cars, MotoGP and Supercross. The Indy 500 on Sunday will be Diffey's third with NBC Sports, which is in the final year of a three-year contract with IndyCar.

Coverage of athletics is among the most popular Olympic programming for NBC, which received a boost the last three Olympics from Usain Bolt, one of the greatest sprinters of all-time.

Diffey is predicting a breakout Olympics for the United States team, which he believes “has such a great chance of maybe being the best team since the Carl Lewis and Michael Johnson era."

He may treat his new Olympic spotlight much as he does IndyCar and the Indianapolis 500, the race Diffey spends nearly two weeks immersing himself in as he studies the 33 cars in the field.

“I love the excitement of who does what when, who succeeds, who fails, who is the surprise story?” Diffey said. “We've had it already this month of May at Indy and it happens in track and field as well. I just love the correlation.”