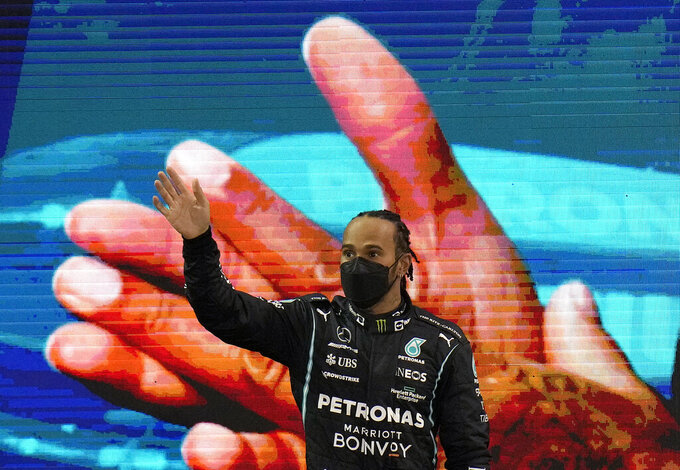 Mercedes driver Lewis Hamilton of Britain waves as he walks onto the podium after finishing second in the Formula One Abu Dhabi Grand Prix in Abu Dhabi, United Arab Emirates, Sunday, Dec. 12. 2021. Max Verstappen ripped a record eighth title away from Lewis Hamilton with a pass on the final lap of the Abu Dhabi GP to close one of the most thrilling Formula One seasons in years as the first Dutch world champion. (AP Photo/Hassan Ammar)

The FIA said all teams have been consulted and that a discussion with drivers will now follow. Details will then be provided to the F1 commission next month before “final decisions” are announced when the season-opening Bahrain GP begins on March 18.

The FIA added that its newly-elected president, Mohammed Ben Sulayem, has also asked for proposals “to review and optimize the organization of the FIA F1 structure for the 2022 season," after the race finish caused confusion. Race director Michael Masi faced heavy criticism and even outrage in some quarters.

Mercedes ended the dispute in December when it withdrew its appeal.

Mercedes had filed a pair of protests following the race, in which a late crash helped Verstappen beat Hamilton for his first title.

Both protests were dismissed, and Mercedes then asked for reconsideration at the International Court of Appeal, a process that could dragged on into this year.

Hamilton had a nearly 12-second lead over Verstappen and was cruising to victory — and the season-long championship title — when another car behind them crashed with five laps remaining.

With the safety car out, Verstappen pitted for fresh tires while Hamilton stayed out to keep track position.

Masi initially said lapped drivers could not pass the safety car, then reversed the call in a decision that jumped Verstappen past several cars and back to second when the race resumed with one lap left.

Verstappen made the most of his quicker tires to zoom past Hamilton and deny the veteran British driver a record eighth title to move one ahead of fellow great Michael Schumacher.