Wickens marks return to racing with podium finish in Daytona 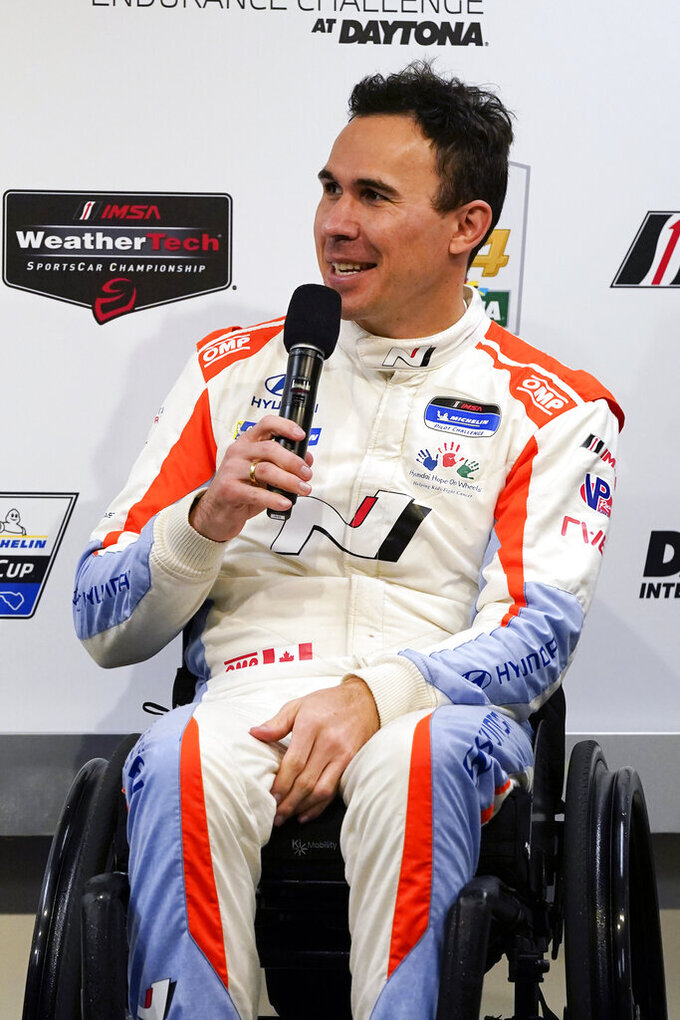 DAYTONA BEACH, Fla. (AP) — Robert Wickens worked for more than three years to get back into a racecar and resume the driving career cut short during his rookie IndyCar season.

His reward was a podium finish at Daytona International Speedway.

And a face full of champagne.

Wickens and Mark Wilkins teamed for a third-place finish Friday in the IMSA Michelin Pilot Challenge touring car class season opener. It was the first race for Wickens since he suffered a spinal cord injury in 2018 in a spectacular crash at Pocono.

Wickens was in his wheelchair for the podium celebration when the champagne was passed out for the customary celebratory spray. But he'd locked the brakes — “rookie move,” he said — and was using both hands to hold his own bottle. So he couldn't move out of the way when the other five drivers on the podium moved in for the attack.

“I was so excited to spray champagne, I just felt like celebrating,” Wickens said. “But then I realized ‘I can’t move because both my hands are on the champagne bottle' and that's not fair. But I wasn't complaining. And I got quite a bit.”

The Canadian was enjoying a breakout rookie IndyCar season before his crash in the 14th race of 2018. Although he can stand with some support, he can't walk and uses a wheelchair. Bryan Herta Autosport made his comeback possible with a custom hand control system that Wickens uses for accelerating and braking.

The team uses the same system in a second car for paralyzed driver Michael Johnson and Herta was determined to make Wickens a race car driver again. Herta called hiring Wickens fulltime for this year's Michelin Pilot Challenge series “for me personally, one of the most important things we’ve done in racing.”

Wickens qualified the car seventh — disappointing for his personal expectations — and started Friday's four-hour race. His goal was to either gain position or maintain seventh on the start — “I didn't want to lose spots,” he said — and drove the car as high as third during his two-hour stint behind the wheel.

The car was in contention for the victory at one point but ultimately fell to third overall. Roy Block and Tim Lewis won the TCR class for KMW Motorsports, while defending class champions Michael Lewis and Taylor Hagler were second in another one of Herta's cars.

The end result was something Wickens never thought possible during so much of his recovery.

“I think it's just the beginning,” he said. “There's a lot of opportunity that we can still improve and become stronger.”

Wickens, who remains a consultant for Arrow McLaren SP in IndyCar, said the support he's received since his accident has been humbling. He also credited his wife, Karli, for helping him get back into a car. The couple announced last week they are expecting their first child.

“Anytime I've been feeling down on myself ... it gives me goosebumps every time I stroll through a paddock and people just give me a thumbs-up,” he said. "Everyone takes the time to come say ‘Hi’ and it means a lot to me. I never became a race car driver expecting that would happen.

“I drive racecars because I love that feeling of pushing something to the absolute limit and just competing at a very high level. And I happened to be quite good at it at a young age. I always loved every aspect of the sport. But I never really thought of what people would think of me and it's been a really fun ride so far.”