Time has come for Vettel to deliver F1 success for Ferrari 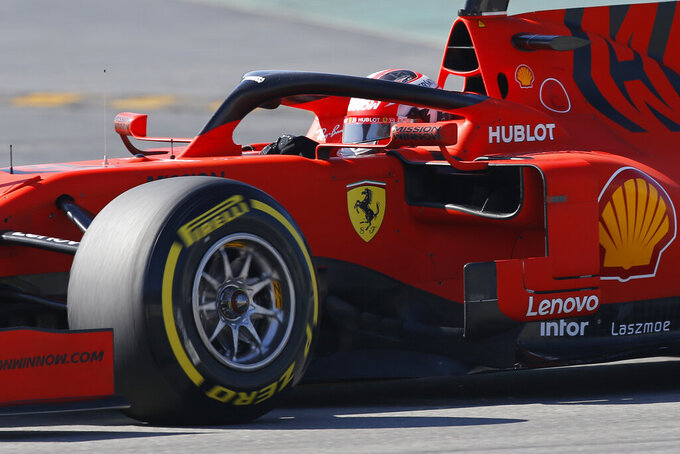 FILE - In this file photo dated Tuesday, Feb. 26, 2019, Ferrari driver Charles Leclerc of Monaco during a Formula One pre-season testing session at the Catalunya racetrack in Montmelo, outside Barcelona, Spain. Previewing the upcoming 2019 season, Leclerc is touted as F1’s next big star waiting in the wings to gain Ferrari's top spot. (AP Photo/Joan Monfort)

PARIS (AP) — After collapsing under pressure in the past two seasons, this may be Sebastian Vettel's last chance to show he can deliver a long-awaited Formula One title for Ferrari.

Otherwise the Italian team may throw its backing behind the young and ambitious Charles Leclerc , touted as F1's next big star along with Red Bull's Max Verstappen.

The season-opening race is next Sunday at the Australian Grand Prix in Melbourne.

Vettel challenged strongly during the first half of 2018, when Ferrari surpassed Mercedes for speed. But just like in 2017, Ferrari made uncommon errors for such a proud team and Lewis Hamilton ruthlessly punished them as he sped to a fifth world title, his fourth with Mercedes.

Calamitous mistakes saw Vettel crashing in the rain during the German Grand Prix to gift Hamilton victory and then botching qualifying in Hungary when the skies opened again.

Ferrari's list of errors was long, including when a mechanic's leg was broken in Bahrain following a pit stop and when the team forgot to attach Kimi Raikkonen's drinks bottle during the heat-scorched Hungarian GP.

They ultimately cost team principal Maurizio Arrivabene his job and he was replaced by Mattia Binotto, who was previously Ferrari's chief technical officer.

It means Vettel is out of his comfort zone, for his relationship with Raikkonen was perhaps too comfortable.

Raikkonen's public indifference to even his own success saw him apparently shrug off his podium finishes with trademark nonchalance, and an impressive victory at the U.S. Grand Prix inspired little more than a grunt of satisfaction.

Raikkonen simply did not seem to have the hunger to push Vettel. But Leclerc does , and early success for the Monegasque driver could either bring the best out of Vettel or prompt Ferrari to revise its hierarchy.

"Obviously the two will be free to fight," Binotto said. "If there is any ambiguous situation at the start of the season, Sebastian is the one who's got today more experience, many years he's with us, he's already won championships, so he's our champion."

Binotto's caution is rooted in the fact Ferrari wasted countless points when Arrivabene did not prioritize Vettel over Raikkonen, even though Vettel was fighting for the title. After the Italian GP, Vettel was exasperated by his team's poor strategy.

Hamilton took over after that, and broke Michael Schumacher's pole position record along the way.

Last season was arguably Hamilton's best, and took him to 73 GP wins — within 18 of Schumacher's F1 record.

As good as Hamilton undoubtedly was against Vettel, he was also on easy street inside his team.

Teammate Valtteri Bottas never won a race and was even less of a rival to Hamilton than in 2017, when at least he won three GP races. Even when he threatened to win one, Mercedes gave Hamilton clear priority over Bottas.

The only year Hamilton lost the title with Mercedes was in 2016, when teammate Nico Rosberg won nine races and pressured him. The 29-year-old Bottas faces huge pressure to prove he can keep his seat for 2020.

Bottas needs wins and this might not be good news for Hamilton.

Daniel Ricciardo hopes his unexpected move from Red Bull to Renault generates the same success Hamilton enjoyed after switching from McLaren to Mercedes.

At 30, Ricciardo has made a decisive career choice at a slightly older age than Hamilton did. But the Australian driver has speed and experience — seven wins among his 29 podiums — as well as audacity, being arguably the best at overtaking alongside Verstappen.

But there are no immediate signs that Renault can compete with Mercedes, Ferrari and Red Bull.

Ricciardo's title challenge may realistically wait until the 2021 season, when widespread rule changes could shake up the field.

Robert Kubica's return to F1 is already a success story after he almost lost his right hand in a rallying accident, so any success on the track will make his comeback one of Hollywood proportions.

The 34-year-old Polish driver wants to repay Williams for giving him another chance at a relatively late age, and with questions over whether his fragile right arm can handle the heavy strain.

His talent and determination aren't in doubt.

Before the 2011 accident left him needing seven hours of surgery on a partially severed right hand, and months of grueling mental and physical rehab, Kubica was one of F1's purest talents.

He earned 12 podium finishes in F1 from 2006-10. Hamilton considers him one of the fastest he's faced.

The 21-year-old British driver has raw speed and a resilient attitude on track. He gets a bonus, too, in learning from Kubica at Williams.

Norris has been considered a McLaren prodigy for the past two years, and the 19-year-old Brit finished second to Russell last year.

Albon has a shot with Toro Rosso. The London-born Thai driver showed some stylish overtaking moves when finishing second behind Leclerc in the 2016 F3 championship.