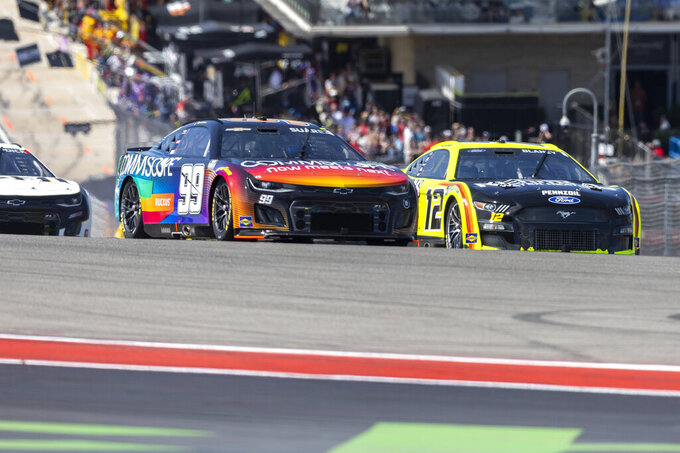 Ross Chastain and Trackhouse Racing became first-time Cup winners Sunday when Chastain bashed and banged his way around the final lap of overtime at the Circuit of the Americas road course.

He tangled with friend and former teammate AJ Allmendinger to secure his first victory in 121 Cup starts. Chastain won in his sixth race with Trackhouse, which is co-owned by Pitbull.

The eighth-generation watermelon farmer from Florida celebrated by spiking a watermelon from the top of his winning Chevrolet. Trackhouse founder Justin Marks said “Mr. Worldwide” told him in a post-race phone call that he was doing the same with a bottle of bubbles.

The win is complex for Chastain, who justified his aggressive last-lap moves against Allmendinger as what's required to win in the Cup Series. Chastain gave initial pause at what damage he may have done in the relationship with his one-time mentor. The two were Xfinity Series teammates at Kaulig Racing.

“AJ is so good, I’ve learned so much from him, and it’s like ‘How do you beat the guy? He taught me so much!'" Chastain said. "I feel bad about AJ. I mean, he’s gonna be upset with me but we raced hard and he owes me one.”

Allmendinger, winner of the Xfinity Series race for Kaulig on Saturday, was openly annoyed after a mandatory trip to the care center. He crashed when Chastain used a divebomb to retake the lead for the final time. The move sent Allmendinger spinning into Alex Bowman and off the course. Allmendinger finished 33rd.

“At the end of the day, we all have to look ourselves in the mirror. If you are OK with it, you’re OK with it. Each person is different,” he said of how Chastain raced him.

“I was doing everything I could do to try to sweep the weekend. We were that close. We know we had a shot to win the race.”

By the time Chastain made it to the post-race news conference, barreling through the doors with a watermelon in hand and a celebratory howl, he didn't sound very concerned about Allmendinger.

But then he waffled again, acknowledging he's been overly aggressive in his difficult struggle to land a Cup ride with a top team. His family to this day runs one of the largest watermelon farms in the country and the 29-year-old contributes.

“I’ve cost AJ a win at Daytona in the Xfinity Series, and he was obviously a quarter-mile away from winning here. He has taught me a lot, and I’m sure that our friendship will hurt for this,” Chastain said. "I feel like I had started to win some of his friendship back, and just being nice to each other when you see each other, it took a while.

“I hate that because I’ve lived through that in my career for 12th place in Xfinity. I’ve fought, and I’ve roughed people up and gotten into people. I’ve wrecked Justin Marks. It’s not lost on me that I make some of the same mistakes. It’s just staring down a Cup Series win. I just couldn’t let that go.”

Marks launched Trackhouse last season with one car for Daniel Suarez and sold Pitbull a piece of the ownership. Then the former driver, who turned 41 on Friday, stunned the motorsports industry with a shock June announcement that he'd bought Chip Ganassi's entire NASCAR organization.

Chastain drove for Ganassi at the time and wanted the second Trackhouse car.

“It was always Ross,” Marks said. “I told him when he got out of the car, it was always him.”

So it shouldn't be a surprise that a version of the two-decade old Ganassi organization, boosted by its spirited new owners and the equalizing Next Gen new model Cup car, has been good in all six races this season. Suarez led every lap of the first stage at COTA but his race was ruined when a tire failed on the second lap of the second stage.

The Mexican had to drive the final 25 laps with no power steering, too, then watch his new teammate become the first Trackhouse driver to victory lane.

“He is gutted,” Marks said. “He came over and gave Ross a hug. He understands the mission here."

Overtime produced the most aggressive action of a long Sunday of racing on the permanent road course used primarily for Formula One. The race had nine cautions and ran 3 hours, 20 minutes.

Tyler Reddick had pushed his way to the led on the single lap run between the eighth and ninth caution, while Chastain and Allmendinger restarted overtime from second and third. Sitting in fourth was Alex Bowman, the driver often chided for “backing into victories.

For a moment, it looked as if another win would indeed fall in Bowman's lap. Overtime featured four lead changes, two by Chastain, one by Allmendinger and Bowman even got to the front, but Chastain decided the race by divebombing inside of Allmendinger.

Bowman finished second for Hendrick Motorsports and a Chevrolet sweep. Christopher Bell was third for Toyota and followed by Chase Elliott of Hendrick, the defending race winner. Reddick was fifth and pole-sitter Ryan Blaney was the highest-finishing Ford driver in sixth.

Chase Briscoe was a contender Sunday until his race fell apart over the final 12 laps.

He had a poor restart and found himself in unexpected traffic when he drove the Stewart-Haas Racing Ford off the course and cut the corner — which drew a NASCAR penalty.

“As long as it’s called that way for everybody, I’m good with that,” said Tony Stewart, co-owner of Briscoe’s car and the guest analyst Sunday in the Fox Sports booth. The NASCAR Hall of Famer also noted that Briscoe lost several positions when he was pushed off track — the opposite of cutting the course to move up in the running order — and had fallen to eighth.

NASCAR ultimately agreed with Stewart’s assessment and rescinded the penalty.

But it didn't get any better: Briscoe had to pit for new tires and dropped to 31st for the next restart. He wound up 30th.