Newgarden races into Portland with IndyCar title his to lose 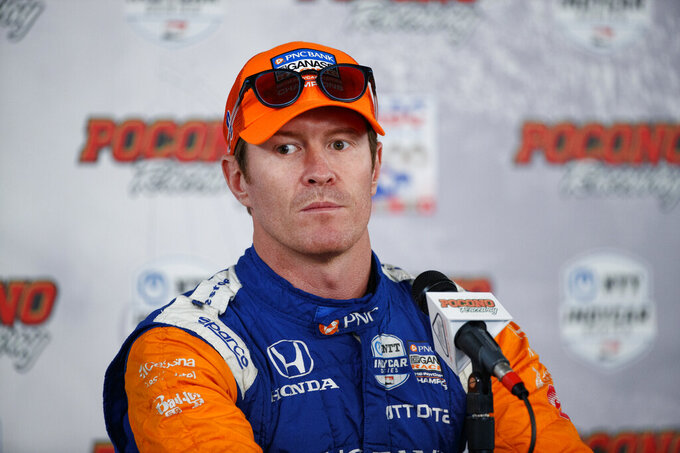 File-This Aug. 17, 2019, file photo shows Scott Dixon during a news conference for Sunday's IndyCar Series auto race at Pocono Raceway, in Long Pond, Pa. Josef Newgarden has been the IndyCar points leader for all but one race this season and built enough of a cushion that his mindset has changed as the championship race speeds into an anticlimactic final two events of the year. Newgarden leads Team Penske teammate and Indianapolis 500 winner Simon Pagenaud by 38 points, while Alexander Rossi is 46 points behind. Five-time and reigning series champion Dixon is still mathematically in the hunt, but a mechanical issue last week at Gateway dropped him to 70 points behind Newgarden. (AP Photo/Matt Slocum, File)

PORTLAND, Ore. (AP) — Josef Newgarden has been the IndyCar points leader practically all season and has built enough of a cushion that his mindset has changed with only two anticlimactic races left.

This is his title to lose.

"We're in such a favorable position," Newgarden said ahead of Sunday's next-to-last race at Portland International Raceway.

His first bobble — well, two bobbles, to be exact, came in Saturday qualifying when he missed a curb and failed to advance out of the first group. He will start 13th, behind two of his three challengers for the title.

Newgarden leads Team Penske teammate and Indianapolis 500 winner Simon Pagenaud by 38 points, with Alexander Rossi 46 points behind. Five-time and reigning series champion Scott Dixon is still mathematically in the hunt, but a mechanical issue last week at Gateway dropped him to 70 points behind Newgarden.

But Dixon had the best qualifying effort of the contenders and will start third on the Portland road course.

Rossi qualified seventh and was annoyed with a change made to his car before his second session. Pagenaud qualified 18th.

Newgarden has been the leader for all but one race. He has had a series-high four victories and won back-to-back poles the last two races. He has seven podiums and an average start and finishing position of fifth. Two trouble-free races to close the season would almost guarantee the Tennessean a second IndyCar title in three years.

"I don't think it's a secure position, but it is the favorable one," Newgarden said. "If we lose it, it probably would sting a bit more. If you are 38, 48 points back, I think it stings less. But if you lose it with a bigger advantage, then yeah, I think it just stings a bit more."

The championship was altered two races ago when Rossi, the consistent challenger for a second straight season, was caught in an opening-lap crash at Pocono Raceway. While it didn't eliminate Rossi from title contention, it hurt him enough in the points race to drain much of the excitement out of the final two events.

The Sept. 21 season finale on the road course at Laguna Seca is worth double points. But to beat Newgarden, his challengers likely need to win out and hope Newgarden has difficult races. The double points — awarded only for the Indianapolis 500 and the season finale since 2014 — has only aided a champion once. That was in 2015 when Dixon won the finale and earned enough markers to overcome a 47-point deficit and beat Juan Pablo Montoya for the title.

His deficit is far greater now, and Dixon sat silently through much of a news conference with the other three title contenders.

"I'd rather be 70 points ahead," Dixon said. "We'll just get on with it. It's nice not to have to worry about points, that scenario. Kind of just get after it, try to have a good weekend, see what happens in Laguna."

It's the same attitude Rossi took after the Pocono crash, when he vowed to be more aggressive and chase victories to rebuild his title chances. But Andretti Autosport was off last weekend on the oval at Gateway outside St. Louis. He finished 13th and dropped to third in the standings.

He won't be reckless on the track to win his first IndyCar title, but Rossi said his team will still be aggressive for the final two races.

Pagenaud is concerned only with what he can control.

He's already had a magical season, having swept the May events at Indianapolis Motor Speedway to save his job with Penske. It would take another run like that to beat Newgarden and win a second IndyCar championship.

"It doesn't really matter what Josef or Alex or Scott do," Pagenaud said. "It really is about my own performance."

Colton Herta won the pole and bumped Will Power from the top starting spot as the session came to a close. He's had a phenomenal rookie season that has likely earned him a promotion from Harding Steinbrenner Racing to Andretti Autosport next year. He became the youngest winner in series history in Austin, Texas, just days before his 19th birthday.