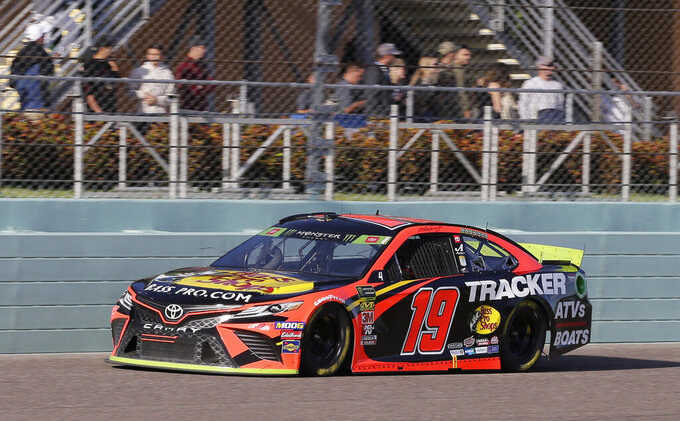 Martin Truex Jr. drives on the front stretch during a NASCAR Cup Series auto race on Sunday, Nov. 17, 2019, at Homestead-Miami Speedway in Homestead, Fla. Truex is one of four drivers running for the championship. (AP Photo/Terry Renna)

Busch emerged from the Joe Gibbs Racing juggernaut and clinched his second title in five years after two teammates were slowed by pit road gaffes.

Busch had raced for the championship in each of the last three seasons but fell short last season in part because of his crew’s own pit error.

Hamlin and Truex each had issues on pit road.

Denny Hamlin’s crew messed up during a pit stop, the second potentially significant mistake by a championship contender in NASCAR’s season finale.

A crew member put too large a piece of tape on the air opening to Hamlin’s engine, causing it to overheat and forcing him to make an unscheduled stop.

Hamlin dropped from third to 19th because of the stop with 46 laps remaining and fell a lap down.

Fellow Joe Gibbs Racing driver Martin Truex Jr. was forced to pit after his team mixed up the right- and left-side front tires on a stop earlier in the 400-mile race. Truex clearly had the dominant car early in the title bout.

Busch moved to the front when Truex was forced to pit after his team mixed up the right- and left-side front tires on a pit stop at Homestead-Miami Speedway. Truex clearly had the dominant car early in the title bout.

Truex got back on the lead lap — and in the championship hunt — thanks to a fortuitous caution.

Martin Truex Jr.’s crew made a huge mistake in NASCAR’s Cup Series championship race, one that could cost him the title.

His team mixed up the right- and left-side front tires on a pit stop on lap 120 at Homestead-Miami Speedway, causing steering issues and forcing the 2017 back to pit road. Truex had led 98 laps and clearly had the dominant car in the title bout.

Truex lost a lap while his crew fixed the error, but still was running in 13th when he returned to the track.

Martin Truex Jr. has won the opening stage of NASCAR’s Cup Series championship race, an indication he’s the one to beat in the finale.

Truex, one of four title contenders in the 40-car field, led the final 59 laps of the 80-lap stage at Homestead-Miami Speedway and took the checked flag more than 5 seconds ahead of Kyle Larson.

The highest finisher among Truex, Busch, Harvick and Hamlin will win the series championship.

Jordan, who owns the NBA’s Charlotte Hornets, and championship contender Denny Hamlin are good friends — they met seven years ago — so Jordan will be rooting for the Joe Gibbs Racing driver and cheering from his pit box.

“We go way back,” Jordan said during an interview with NBC Sports. “He’s a season-ticket holder at the Hornets. I spend a lot of time playing golf with him, and obviously I’m a big NASCAR fan, so I came out to support him.”

Jordan says he grew up watching NASCAR and sets “my clock every Sunday” to catch races.

Jordan says he has no plans to get more involved in racing.

“I’ve got a lot on my plate,” he said. “I love being a fan. I still understand the sport, but in terms of ownership, nah, I think I’m just going to sit back and watch it and support from afar.”

NASCAR will run its final race under the Monster Energy banner, as the series is set to move to a new sponsorship model in 2020.

Monster Energy has sponsored the Cup Series since 2017. NASCAR top circuit has also been called the Winston Cup, the Nextel Cup and the Sprint Cup.

Monster executive Mitch Covington said he hoped the company "brought a lot of fun" to NASCAR and the brand will continue to remain in the series. The name of the stock car series will simply be the NASCAR Cup Series.

NASCAR is moving toward a tiered sponsorship, and those plans will be announced at the awards banquet next month.

"Monster has been a phenomenal partner for us," NASCAR President Steve Phelps said Sunday. "They've had significant success with their sponsorship and entitlement."

Busch, Harvick and Truex are all going for a second Cup championship. Hamlin is looking for his first.

Las Vegas odds-makers have basically posted the winner-take-all race as a dead heat with no clear favorite.

This championship field is nearly identical to last year, with Busch, Harvick and Truex returning to the finale again. Hamlin has not been in the championship race since 2014.

Homestead is moving on the 2020 schedule to March, ending its streak of 18 years as the season finale.