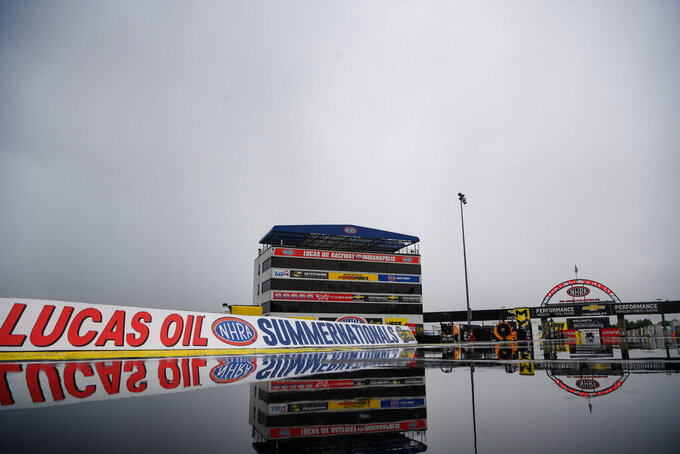 In this photo provided by the NHRA, water pools at Lucas Oil Raceway as the Lucas Oil NHRA Summernationals were postponed due to inclement weather in Indianapolis, Sunday, July 19, 2020. (Jerry Foss/NHRA via AP)

YORBA LINDA, Calif. (AP) — Drag racing great John Force and his four-car NHRA team are remaining parked for the rest of the 2020 season.

John Force Racing announced Friday that it won't compete in any of the final 12 events this year, citing sponsorship issues and making a financial decision to “live to fight another day.”

“We can’t fight now. We can’t race right now. But with what I have, with the help of my sponsors and my own personal money, I can maintain,” said Force, a 16-time series champion. “I have to protect my family, my employees, my teams and my sponsors. What I built was a team that could win. All I have to do is get to next year. It will look different.”

John Force Racing skipped the first two events, both in Indianapolis, since the NHRA’s return amid the pandemic. His absence was a blow to the series and sparked some speculation about his health.

Force stayed silent throughout the two weekends, but he offered insight Friday.

“Suddenly, the virus hit, and it changed the world," Force said. “We had to reset John Force Racing. Everyone was having to adapt. We had to make cuts everywhere. We ran numbers over and over. In our contracts with sponsors, we have guarantees. ...They get social media, certain number of races, certain number of race days, activation at races and other commitments. No matter how I looked at it, I couldn’t deliver on those commitments.”

Force insists his team, which includes daughter Brittany and defending Funny Car champion Robert Hight, will return in 2021 “stronger than ever.”

“I am really heartbroken I’m not out there,” John Force said. “If I had stayed and raced, I couldn’t come back. If I step back now, I can. I want to be with all of you again and I want to be competitive."