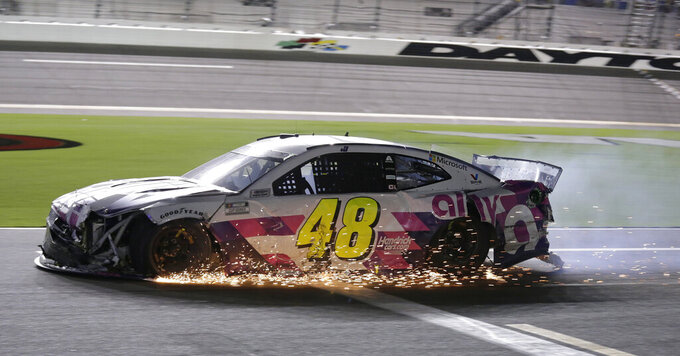 On his night. On his emotions. On his legacy. He pretty much covered them all.

Johnson posted a picture on Instagram of his battered No. 48 Chevrolet, which was caught up in a late-race wreck and knocked out of playoff contention in the regular-season finale Saturday. The crash meant his racing career would end without a record-setting eighth Cup Series championship.

Johnson was running near the front of the pack most of the night and was in position to make the playoffs until Denny Hamlin and Joey Logano made contact and started a multi-car melee that collected Johnson and nine others with less than two laps to go. Logano slammed into Bubba Wallace, who slid sideways and nearly wrecked Byron.

Logano tried to straighten his car, but Matt DiBenedetto rammed into his rear bumper and caused him to lose control for good. Johnson looked like he might escape the carnage, but Logano spun into Matt Kenseth, who made a hard right into Johnson’s driver-side door.

Johnson sat on pit road in his mangled mess during a red flag and surely realized that the “storybook ending” he talked about a day earlier was gone.

“The last couple of months, we’ve been really getting our act together and running well,” Johnson said after finishing 17th and missing the final postseason berth by six points. “Definitely disappointed to not be in the playoffs. That was the No. 1 goal to start the year.”

Johnson would have been safely in the 16-car field had he not missed a race following a positive test for COVID-19 and had a second-place finish thrown out at Charlotte after failing post-race inspection.

He noted both setbacks after another disappointment at Daytona, a track at which he has won seven times over two decades. He also has now crashed 43 times at the historic venue.

Johnson handled the latest one with grace and dignity — no surprise given the way he has gone about his business in an often-glaring spotlight. He walked to victory lane to congratulate Byron and his team, including crew chief Chad Knaus. Johnson and Knaus were together for all seven titles in the 48.

“I feel awful,” Knaus said. “Let’s be quite honest, right? Jimmie shouldn’t be in this position. … That hurts. I hate it for Jimmie. He’s one of my best friends. He was the first guy that came by pit road and looked up at me, revved up the engine, gave me a thumbs-up. He means the world to me. He’s a great man and brother of mine.

Johnson will do the same down the stretch, looking to end a winless streak that’s now stretched to 120 races. His last victory came in June 2017. The draught led to Johnson’s breakup with Knaus and a new crew chief, Cliff Daniels.

“Cliff Daniels and these guys on my team, they pour their guts out for me,” Johnson said. “There’s 10 races left, 10 trophies to go chase and we’ll have to focus our efforts there.”

Regardless of how it plays out, Johnson already has left an indelible mark on stock-car racing. He won five consecutive championships (2006-10), forcing other drivers and teams to play catch-up, and added two more (2013, ’16) years after the unprecedented run. He's a first-ballot Hall of Famer with a racing career that will be hard to match, let alone top, for anyone moving forward.

“The last three years have been tough. We all know that,” Johnson said. “I think we’ve shown some bright spots, and Cliff has done a really good job of leading this team and taking this team in the right direction. I think we can show that and close out the year.”