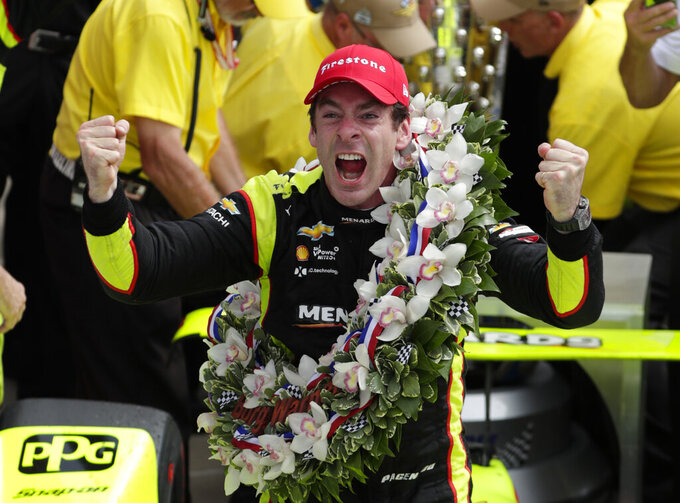 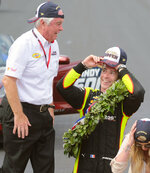 DETROIT (AP) — Simon Pagenaud saw the wreath he won less than a week ago at the Indianapolis 500 and lamented how the leaves and orchids were wilting.

During the doubleheader weekend in Detroit, the IndyCar points leaders is looking for a way to preserve his coveted prize — perhaps with a spray — and to stay atop the series.

Pagenaud was in a much different position a month ago, with questions swirling about whether he was racing for his job with Team Penske.

"It's probably true," he acknowledged Friday.

After a breathtaking win at Indy, Pagenaud earned a public assurance from Roger Penske that he "absolutely," would be driving for him next year.

Pagenaud, though, will be behind the wheel of his Chevrolet at the Detroit Grand Prix races on Saturday and Sunday thinking as if his job is still on the line.

"That's it. It's normal. It's the same for every athlete in the world."

And like athletes in all sports at every level, the 35-year-old Pagenaud has had slumps. He didn't win any of his 17 IndyCar races in 2018 after winning seven races the previous two years and becoming the series champion in 2016.

Pagenaud believed, not long ago, he would eventually be replaced by Alexander Rossi.

"That was scuttlebutt," Penske insisted.

Pagenaud has competed for Team Penske since 2015 and said he is not interested in driving for anyone else.

"I want to be back," he said. "There's no other team that I would want to be with. It's the best team in this business. If you look at the stats, it's also the most successful team in the world. I want to win Indy 500 another time. I want to win another championship."

Pagenaud, perhaps fueled to secure his job, responded to the scrutiny by being the first driver to earn multiple victories this season, finishing first on the road course at Indianapolis and becoming the first Frenchman to win the Indy 500 since 1914.

"The most memorable moment will always be the milk on my face and talking to President Trump, no matter what your political views might be or anyone's views might be," Pagenaud said. "It's just really awesome to talk to the president of the biggest country in the world. That was very special."

And now, he has a chance to keep rolling at an event Penske promotes in his beloved Motor City. The 35-year-old Pagenaud likes his chances because, so far, the life-changing effect from winning Indy has been a boost of energy.

"I feel like I'm actually younger than I was before and it's exciting," he said. "I've got a whole championship ahead of me, too. The funny thing is when you set goals and when you climb a mountain like this, you get to the top and you see other mountains you want to climb. I assume that's what happens to the people when they climb Mount Everest. They want to climb the other ones. I feel the exact same way at the moment."

Racing in Detroit might bring Pagenaud back down to Earth.

The 2.35-mile road course with 14 turns on Belle Isle is nothing like the smooth and wide surface he just competed on, trading the lead with Rossi five times over a frantic final 13 laps.

"It is vastly different," Pagenaud said. "The spectrum is pretty much opposite. We just drove on a speedway 230 mph. Now, we're going to go on a bumpy track, breaking hard, turning left and right, wrestling the car around.

"It's going to be quite a physical challenge. I'm up for it. It's definitely going to be tough to do back-to-back races for sure."