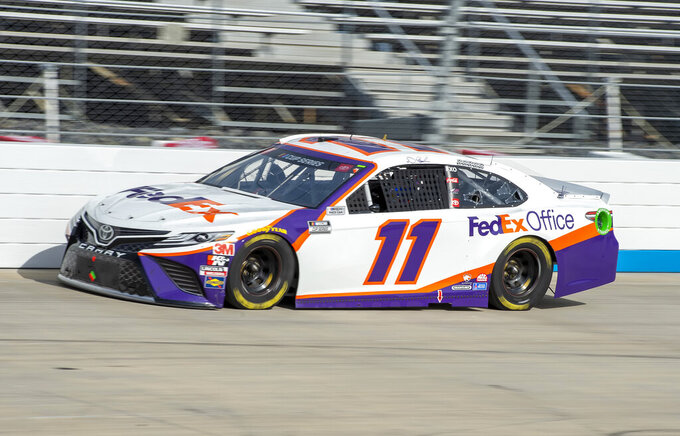 Hamlin matched Kevin Harvick for the season victory lead with six, matching his total from last season and closing within two of his career high set in 2010.

Hamlin chased down Truex, his Joe Gibbs Racing teammate, and held on in the first of two Cup races this weekend at Dover.

“I’ve been running down the leaders the last few weeks, I just haven’t been able to get there,” Hamlin said.

Hamlin won for the first time at Dover in 29 career races. He was told by crew chief Chris Gabehart to save the No. 11 Toyota from a burnout because the car is needed again Sunday.

“I love the track, I just haven’t been very good here,” Hamlin said.

Hamlin has 43 career wins, which puts him behind Junior Johnson (50) for most Cup victories without a championship. Again, Hamlin has at least positioned himself to make the championship race in Phoenix.

“I thought the 11 was better than us all day long,” Truex said.

Kyle Busch was third to make it a 1-2-3 racing for the Gibbs heavyweights. Harvick was fourth and Chase Elliott fifth.

Jimmie Johnson finished seventh and inched his way into the 16th and final playoff spot with two races left before the field is set. William Byron lost 28 points on Johnson to fall out of the playoff grid.

There is one more race at Dover and next week at Daytona to set the playoff field.