From farm to track: Chastain puts watermelons in spotlight 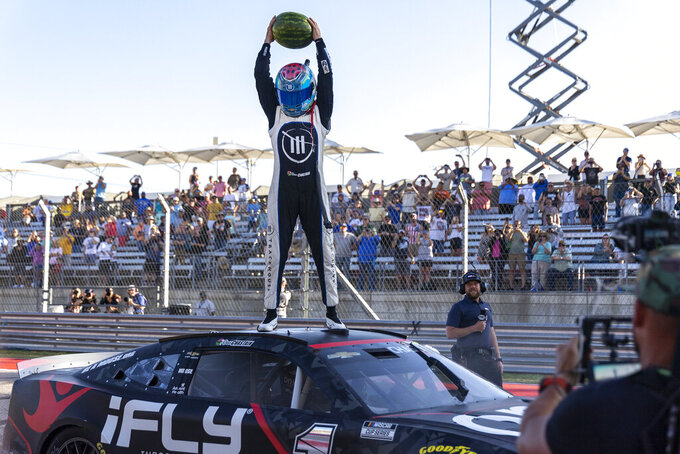 Ross Chastain started the NASCAR season with one watermelon and it traveled with him from track to track. The fruit lasted five weeks before “The Watermelon Man” had to freshen his supply.

The eighth generation watermelon farmer from Florida did not call home and ask his family to send a fresh melon to Austin, Texas, for the first road course of the season. He headed to the store.

Watermelons have rarely been highlighted the way they were Sunday when Chastain won his first career Cup race. In his 121st career start, Chastain finally got to climb atop a Cup car and spike a watermelon from the roof of his Chevrolet in victory celebration.

The 29-year-old then snagged a chunk of broken watermelon off the Circuit of the Americas asphalt and took a hearty bite. Chastain carried that slice of watermelon through all his victory obligations, a true symbol of how far he's come in his career.

“I don’t know how to process it yet. I sit here, and I look at this (watermelon) and I think back to the stories of our family,” Chastain said after his aggressive battle with former teammate AJ Allmendinger on the final lap of overtime earned him and Trackhouse Racing their first victories.

The Chastain family initially settled in Georgia until Chastain's great-grandfather relocated to Punta Gorda, Florida. J.D.I Farms began when his great-grandfather finished his military commitment and has been passed down several generations.

The farm is currently run by Chastain’s father, Ralph, and his brother, Chad. The family has five full-time employees — so yes, Chastain has to farm when he’s home in Florida — and an outside crew is used for planting, watering and harvesting.

“My dad and uncle became old enough to farm on their own. They’ve grown the farm to an incredible spot,” Chastain said. "We just honed in on watermelons as the family business. It started eight generations ago. Really before that, 12 generations ago they were farming, but back then everybody farmed. We stuck with it, for better or worse, and every generation has stayed with it.”

Chad Chastain is also the spotter for his brother; if he's at the track, their father cannot attend the race. Susan Chastain is a traveling nurse and nervously paced around the Trackhouse pit stall Sunday holding her breath as her son closed out his first win.

As he looked down at the smashed slice of watermelon that represented his Cup win, Chastain was able to find parallels in the family business and his own difficult climb to NASCAR's top levels. He was 18 when he made his debut in the Truck Series and although he's made 410 starts across NASCAR's three national series, Chastain has run only eight full seasons since his 2011 debut.

His trajectory has been a series of starts, stops and sponsorship searches. When he finally hit the jackpot with the promise of full-season backing from DC Solar, the FBI raided the business in a Ponzi scheme investigation. The collapse of the company came just days after Pitbull had been hired by DC Solar to play its Christmas party; Chastain now drives for Trackhouse, a team co-owned by Pitbull.

Chastain ran his first full Cup season with Chip Ganassi Racing last year, then landed the second seat at Trackhouse when it bought Ganassi's NASCAR operation ahead of this season. He's now got a spot in the 16-driver playoff field and goes to Richmond for Sunday's race ranked a career-best fifth in the standings.

Even so, he never moves too far beyond the work the rest of his family is putting in at the farm. The J.D.I., by the way, stands for “Just. Do. It.” in a play on the famous Nike slogan.

Crop insurance doesn't exist for watermelon farmers in Florida, Chastain said, and that has limited the number of production farms to less than 10.

“To think back to the farming and then tie that into the racing, how my career has went... and to get to talk about watermelons on a national level, get to talk about agriculture in a positive light,” Chastain said. "It’s a very small number of people in the world that grow the crops that feed this world, and feed this population worldwide, so it’s a thankless job for the farmers. The real farmers. I’m just the one that gets to talk about it now, but I think for farmers and small racers everywhere, this is a big win.”