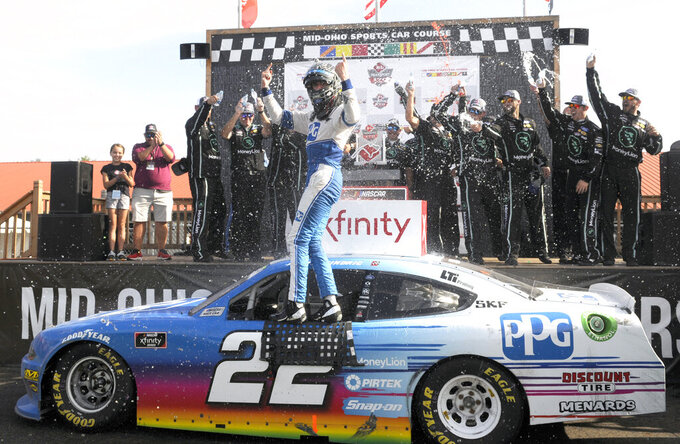 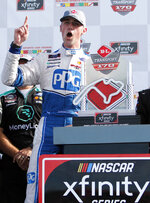 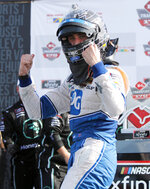 The 20-year-old Cindric won for the first time in the series last week on the road course at Watkins Glen.

"To get my first two wins within a week is incredible," he said. "To win on a road course like this obviously gives you a lot of confidence."

A.J. Allmendinger, driving a Chevy for the northeast-Ohio based Kaulig Racing was third, 10.290 seconds behind.

Points leader Tyler Reddick of Richard Childress Racing was fourth. His lead is 28 points over Bell.

Bell was happy to have back-to-back road courses behind him while still being able to stay close to Reddick.

"Road-course racing is obviously not my strong suit," Bell said. "To get out of here and maintain points is good for us."

Cindric, the pole-sitter for a second straight year, took the lead from Chase Briscoe on Lap 63 in the second turn, or keyhole, with an outside move. Cindric led 47 of the 75 laps on the 13-turn, 2.258 mile course.

He is the son of Team Penske President Tim Cindric and the grandson of the former track owner, the late Jim Trueman, who was the car owner when Bobby Rahal won the 1986 Indianapolis 500.

Cindric said his family would vacation at Mid-Ohio and he's dreamt of winning there.

"I've had four or five poles here over my career here and never won on anything I've driven so it feels awesome," he said. "It's cool because there's probably kid out there watching the corners wanting to be a race car driver some day and that was me 10, 12 years ago watching the corners, running around, playing in the grass, doing whatever you want, getting a hot dog."

A native of Columbus, about 60 miles to the south, Cindric led 59 laps last year but was passed by Justin Allgaier with three laps to go and finished second.

Briscoe in the Biagi-DenBeste Racing Ford won the first 20-mile stage when Cindric made his first stop on Lap 18. Cindric stalled coming out of the pit and was 14th through the stage but after everyone pitted, he was second to Bell by Lap 22.

The restart on Lap 37 resulted in another caution before Turn 3 when Allgaier lost his grip and spin, creating a chain reaction for several cars around him.

"We had good position and spun ourselves out of track position," Allgaier said. "We just didn't have the raw speed to get around, That's the frustrating thing. We held pace all day."

While that was happening, Hawksworth made a pass on Bell just before the caution and moved into first and claimed the stage under caution.

Hawksworth in his first series race was 15th.

Cindric won the race he should have won last year and is on a roll.

"We always want to win but I'm happy for my friend, Reddick said. "He works hard and wants to win really, really bad. Now that he's won two, I have to go over and tell him to slow down a little bit."

Kaulig Racing's Justin Haley was disappointed with his ninth-place finish in front of what was a home crowd.

"No power steering. No brakes and the car just wasn't handling," he said.

Allmendinger on Cindric: "I was fortunate to win the first one here for Team Penske (2013) so that have a really good race car around here. You get confidence like Austin has now and you see it on the racetrack, so he's going to be tough to beat.

The Food City 300 at the Bristol Motor Speedway on Friday night.