Bottas under pressure to show he can beat Hamilton again 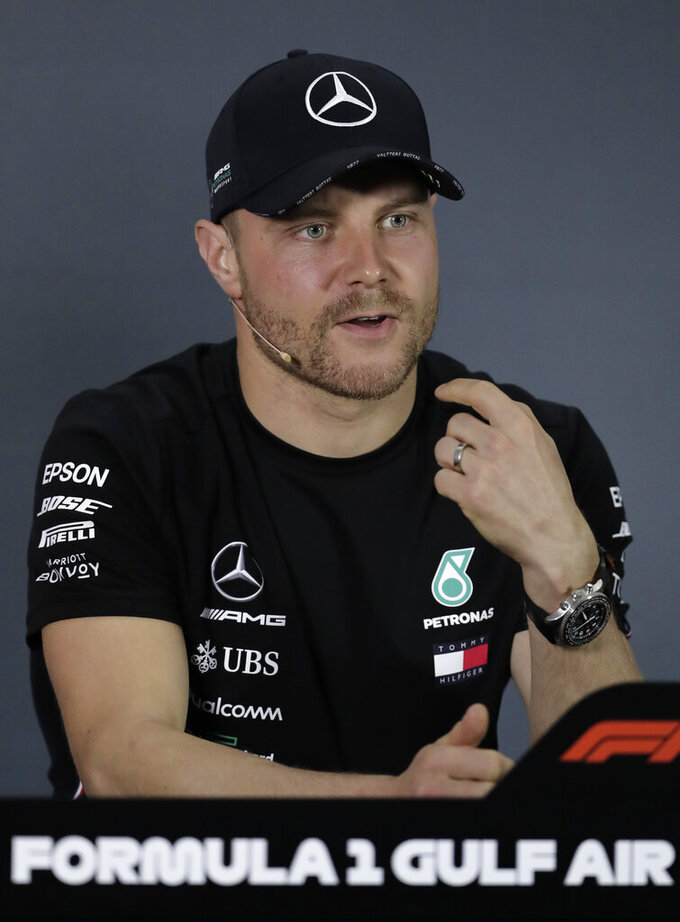 SAKHIR, Bahrain (AP) — After facing criticism for not winning a race last season, Valtteri Bottas has to deal with a different kind of pressure at this weekend's Bahrain Grand Prix.

The expectation level has shot up following Bottas' impressive win at the season-opening Australian Grand Prix two weeks ago, which showed he could be a serious rival for Mercedes teammate and defending F1 champion Lewis Hamilton.

In Melbourne, Hamilton started from pole position, but Bottas zoomed past the five-time world champion and then controlled the race with aplomb. He even picked a bonus point for setting the fastest lap.

The Finnish driver had vowed to come back stronger this year after flopping for much of 2018. He worked out intensively back in his native Finland during the offseason and even grew a beard to show he means business.

His confident victory in Australia convinced observers that Bottas is a much more motivated driver now, something he firmly agrees with.

"I can truly say something in my mindset has changed," Bottas said Thursday at a news conference ahead of the Bahrain GP. "The preparation over the winter and just the way I feel and think about things changed. It's quite difficult to explain in detail, but I feel different."

But Hamilton has not noticed, except for the obvious change.

"He's the same guy he was last year. There's no difference for me except he has a beard," Hamilton said. "I've never thought he was a weak person, anyway, I've always seen him as a strong character."

Hamilton has won four of the past five F1 titles driving for Mercedes, missing out in 2016 when he finished second to teammate Nico Rosberg. But he insisted that the loss in Australia — and the prospect of another strong in-house challenge — doesn't faze him.

"Not really. It doesn't really change a thing. We move on," Hamilton said Thursday at the Mercedes motorhome. "It was a great race from him and I look forward to seeing more from him."

He also expects Ferrari to bounce back after a disappointing race in Melbourne, where Vettel finished fourth and Ferrari newcomer Charles Leclerc was fifth. Both were around one minute behind Mercedes, which was an alarmingly uncompetitive performance considering how slick Ferrari had looked in pre-season testing in Spain.

"We expected more. On my side I made quite a lot of mistakes in qualifying," Leclerc said. "We expect to be more competitive here (in Bahrain)."

Mercedes boss Toto Wolff thinks Ferrari will do better on a track which encourages overtaking.

"We've seen the potential of Ferrari's package in Barcelona, so we expect them to come back strong," Wolff said. "After the Barcelona test, we felt that we were the challengers. Whatever the Melbourne result says, our mindset hasn't changed."

Bahrain's 5.4-kilometer (3.3-mile) track sits in the middle of the desert, on a former camel farm. Although desert winds sometimes sweep sand onto the circuit, it quickly dissipates and causes little disruption. Temperatures can hit nearly 40 degrees Celsius (104 degrees Fahrenheit) in the afternoon, but the circuit is considerably cooler when the race starts at 6 p.m. local time. Qualifying is also at that time, but two of the three practice sessions are in the searing afternoon sun and less reflective of how cars are managed for the race itself. Running cars in normal race set-up during afternoon practice is pointless, since it would lead to severe damage from overheating to the electrics, gearbox and engine.