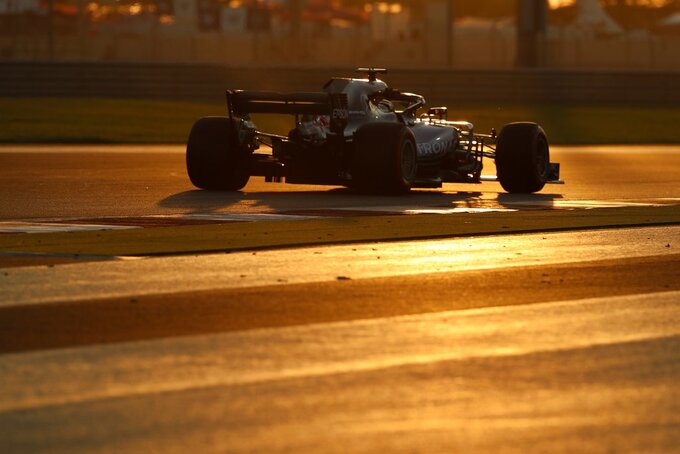 ABU DHABI, United Arab Emirates (AP) — Eyeing his first win in a year in which he has taken a back seat to Lewis Hamilton, teammate Valtteri Bottas was fastest in the second practice for the season-ending Abu Dhabi Grand Prix on Friday.

Hamilton has nothing to prove after winning 10 races on the way to his fifth Formula One championship. However, he had an awkward time on Friday as he struggled with the grip on his tires in both sessions.

Bottas, who has not won this year, was .044 seconds quicker in his Mercedes than Red Bull driver Max Verstappen on the Yas Marina circuit. The last of Bottas' three career F1 wins was here last year.

"It's nice to be on top of the timesheets, but we now need to build on that and I also need to find more performance from myself," the Finn said. "My goal for the weekend is to repeat last year's result."

Vettel, second to Hamilton in the championship for a second straight year, was sixth in the second practice, trailing teammate Kimi Raikkonen.

The session started at 5 p.m. and finished under floodlights to mirror conditions for Saturday's qualifying and Sunday's race.

Earlier, Verstappen was fastest in the first practice by about half a second. Ricciardo was next, Bottas third, and Hamilton fourth about one second behind.

"There was a lot of sliding around and we were struggling with the tires," Hamilton said. "There's a big difference in track temperature between the two sessions."

Verstappen, who has impressed with a win and four other podium finishes in the past six races, is fighting Bottas to finish in fourth place in the driver standings.

Bottas is only three points ahead of fifth-place Verstappen, who has won two races this season. He almost won a third but was bumped off track by back-marker Esteban Ocon while leading the Brazilian GP two weeks ago, dropping to second place while Hamilton went on to win.

"The car seems to be working really well again, better than expected and just like we experienced in Brazil," Verstappen said. "I felt positive right from the start. It was mostly smooth."

The race will be the last with Red Bull for Ricciardo, who is joining Renault next year. The Australian has had a wildly inconsistent season in winning two races and failing to finish eight because of Renault engine problems.

Ricciardo won two of the opening six races — China and Monaco — and has not had a podium finish since.

"Since Monaco I've been hoping for a strong weekend and now this is my last chance with the team. I want it even more," Ricciardo said. "Hopefully we can be somewhere on the podium if we perform well in qualifying."

Red Bull is ditching Renault engines in 2019 to switch to Honda, while, ironically, Ricciardo will be driving with the same engines which caused him so many complications this year and last.

It will also be Raikkonen's final race for Ferrari before joining Sauber next year, with 21-year-old Charles Leclerc from Monaco leaving Sauber for Ferrari.

There is a third and final practice on Saturday afternoon before qualifying.