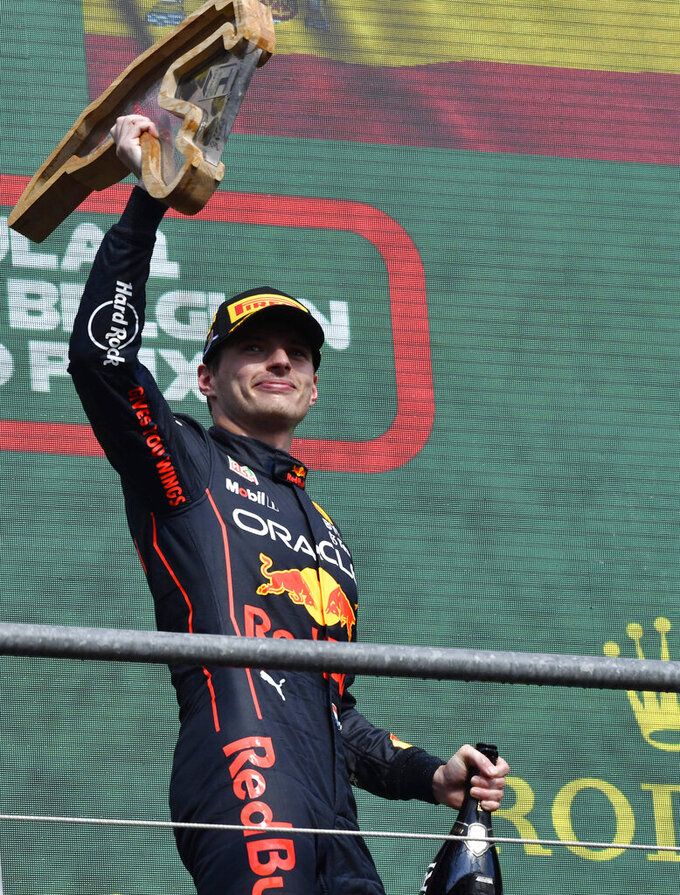 First place Red Bull driver Max Verstappen of the Netherlands holds up his trophy on the podium after winning the Formula One Grand Prix at the Spa-Francorchamps racetrack in Spa, Belgium, Sunday, Aug. 28, 2022. (AP Photo/Geert Vanden Wijngaert) 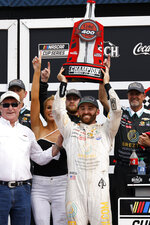 Last race: Austin Dillon passed Austin Cindric with three laps to go after a 3 hour, 20 minute red flag rain delay at Daytona and earned his way into the playoffs with his first victory in 79 races.

Fast facts: The race, moved from Saturday to Sunday because of rain, was stopped with 21 laps remaining after the rain came and produced a 15-car crash. ... Ryan Blaney earned the only spot in the playoffs for a non-race-winner by three points over Martin Truex Jr. ... Dillon was the 16th unique race winner of the season. But Kurt Busch, who won in May at Kansas, won't contend in the playoffs after 23XI Racing withdrew the medical waiver that was holding his spot as he recovers from a concussion. ... Brad Keselowski's string of making the playoffs nine straight years ended; it was the longest in the series. ... Only five of 37 cars at Daytona avoided crashing.

Last race: Jeremy Clements passed Austin Hill on the third and final overtime restart to win at rain- and crash-plagued Daytona, his first victory in five years and one that assured him a spot in the playoffs.

Fast facts: Clements only other career victory came on Aug. 27, 2017, or 164 starts ago. ... He became just the eighth series regular to win a race this season with three events remaining in the regular season. ... Eighteen of the 38 cars that started the race were already in the garage when the race, delayed nearly three hours at the start, ended around 1:30 a.m. ... With eight of the 12 playoff spots accounted for, the four non-winners in position to make the postseason are Riley Herbst, Sam Mayer, Daniel Hemric and Landon Cassill.

Last race: Verstappen, the defending series champion, started 14th because of a penalty. He surged to lead by lap 12 of 44 and won in Belgium for his ninth victory of the season.

Fast facts: Verstappen's victory was his third in a row and ninth in 14 events this season. It allowed him to expand his points lead to 93 over new No. 2, Red Bull teammate Sergio Perez, with Charles LeClerc dropping to third. ... Including the final race of last season, Verstappen has won 10 of the last 15 F1 races. ... Seven-time champion Lewis Hamilton, still winless this year, had his bid for a sixth straight top-three finish end on the first lap when he clipped the car of Fernando Alonso and briefly went airborne. It was the fifth time in his career Hamilton has retired on lap one, and third at Spa-Francorchamps.

Fast facts: Penske teammates Power and Newgarden are atop the standings with six-time champion Scott Dixon just 14 points back and Marcus Ericsson 17 behind. ... Newgarden's five victories have come in just 15 races; no other driver has won more than twice. ... He's won two championships (2017, 2019) and Power has won one (2014). Dixon won his first championship in 2003.