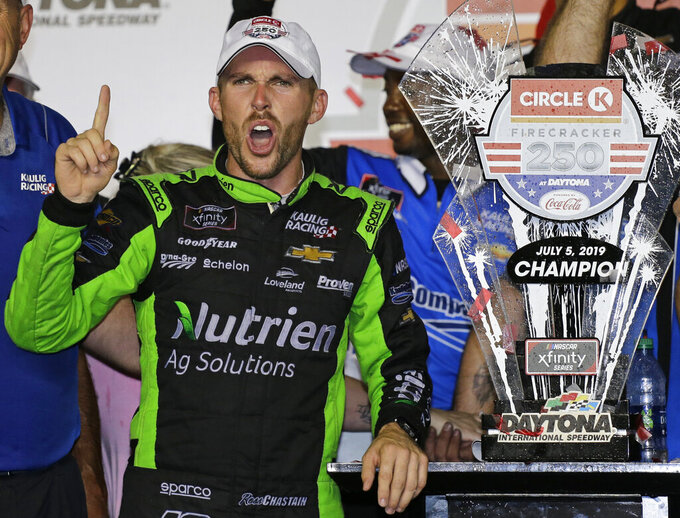 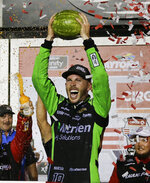 Matt Kaulig entered the event determined to field enough Chevrolets to give his team a chance to win. It included a last-minute entry for current NBC analyst AJ Allmendinger, and Allmendinger pulled out of line on the final lap to nab third place and complete the Kaulig sweep.

Justin Haley was second as the three Kaulig drivers lined their Chevrolets up side-by-side-side for a victorious celebratory lap.

"I can't wait to get to victory lane. I've never even been to it," Kaulig said.

The monumental moment for the Kaulig team didn't last to the post-race party. Allmendinger's car was later disqualified for an engine violation and he lost the third-place finish.

Chastain, meanwhile, celebrated by carrying a watermelon to Daytona's start-finish line and smashing on the pavement. He comes from a family of Florida watermelon farmers and has made smashing the fruit his signature move.

"Oh my God!" Chastain screamed. "I came to these races and sat in the stands and watched as a fan as a kid. I just won at Daytona!"

Chastain last month won the truck series race in Iowa, but the victory was stripped because his winning truck failed post-race inspection. Chastain's disqualification was the first of its kind under NASCAR's new zero-tolerance policy regarding failed inspections.

The rule is designed to curb cheating, which is prevalent in NASCAR as teams manipulate the rulebook through research, development and gimmicks. But Chastain's team argued the failure was related to race damage, a claim that was denied during his appeal.

The race was delayed 2 hours, 35 minutes after NASCAR had already moved the start up roughly 15 minutes. The skies opened an hour before the scheduled start, putting all activity on hold.

Earlier Friday, qualifying for the Cup race was canceled because lightning in the area around the track made it impossible for NASCAR to inspect the race cars. The field for Saturday night's race was set on points.