Lauda to be honored with special tributes at Monaco GP 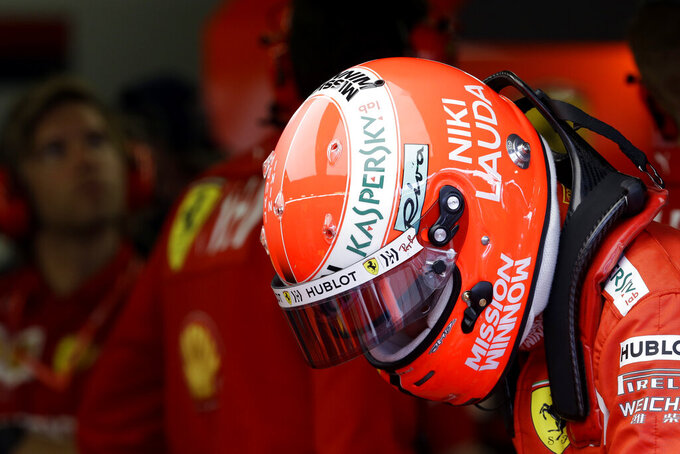 The name of three-time Formula One world champion Niki Lauda is written on the helmet of Ferrari driver Sebastian Vettel of Germany during the second practice session at the Monaco racetrack, in Monaco, Thursday, May 23, 2019. Three-time Formula One world champion Niki Lauda, who won two of his titles after a horrific crash that left him with serious burns and went on to become a prominent figure in the aviation industry, has died on May 21, 2109. He was 70. (AP Photo/Luca Bruno)

MONACO (AP) — Special tributes will be held in memory of Formula One great Niki Lauda at the Monaco Grand Prix on Sunday.

The three-time champion died on Monday at the age of 70 , less than one year after undergoing a lung transplant. The Austrian driver won two of his three F1 titles after coming back from a horrific crash that left him fighting for his life in a burning car at the 1976 German Grand Prix.

A minute's silence will be held at 2:53 p.m. local time, with all 20 drivers on the grid — along with contemporaries and peers of Lauda — holding a red cap in tribute.

Lauda, who was scarred for life and lost most of his right ear following his accident, stood out in the paddock in recent years because of his distinctive red cap.

He won 25 races, including two in Monaco, and fans watching Sunday's race are encouraged to pay their own tributes.

"They can either wear a red cap, display a message on a banner, or simply applaud," F1 said in a statement Friday. "Those watching from the yachts in the harbor can sound their klaxons, anything appropriate to honor the memory of one of the sport's true heroes."

In recent years, Lauda worked as a non-executive chairman at Mercedes alongside head of motorsport Toto Wolff.

They became close friends and Wolff paid a moving tribute to Lauda .

Lauda played a key role in persuading Lewis Hamilton to join Mercedes in 2013, after the British driver left McLaren.

Hamilton has won four of his five titles under the guidance of Lauda and Wolff, with Mercedes winning every drivers' and constructors' title since 2014.

In Thursday's practice sessions, Hamilton carried the message 'Thanks Niki' on his car, and Ferrari driver Sebastian Vettel had Lauda's name on his racing helmet.