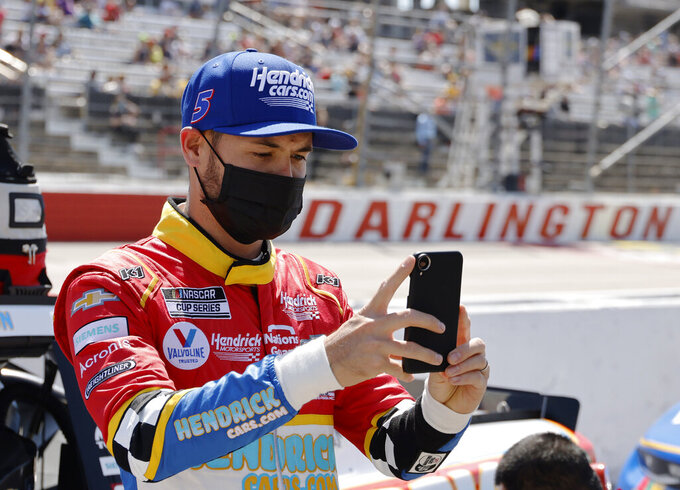 FILE - In this Sunday, May 9, 2021, file photo, Kyle Larson uses his cell phone before the NASCAR Cup Series auto race at Darlington Raceway in Darlington, S.C. Larson took time out from his NASCAR schedule to Zoom in with the class at Philadelphia’s Urban Youth Racing School. The Philly-based program that creates opportunities in racing for minorities extended an olive branch last year to Larson after the driver was caught using a slur during an iRacing event in April.(AP Photo/Terry Renna, File)

DOVER, Del. (AP) — Kyle Larson made a quick Zoom stop Saturday before he zipped off to his latest sprint car race: the NASCAR star had to say hello to the students at the Urban Youth Racing School.

“It’s good to be back racing again in NASCAR,” he told the class.

Larson’s road back to NASCAR after he was suspended last season for using a slur during an iRacing event can be traced in large part back to his heavy involvement with UYRS. The Philly-based program that creates opportunities in racing for minorities extended an olive branch last year to Larson and a fast friendship was formed with program founders Anthony and Michelle Martin.

In a sport in which minorities are scarce at all levels, the Martins made it their mission to introduce inner-city youngsters, most of them Black, to the motorsports world with the school. The school has served more than 7,500 students from ages 8 to 18 over the last 22 years and teaches all aspects of auto racing, including driving and Black racing history. UYRS uses a science, technology, engineering and math curriculum and students are quizzed and graded and compete for various year-end awards.

Larson surprised the school last year when he bought it two racing simulators and gave them a test run in September against select students. Chevrolet has since bought the school two more simulators.

“What kind of stuff will you guys work on, today, this year?” Larson asked the class of 15 students.

Martin and his staff had a full syllabus devoted to topics ranging from race car aerodynamics to a history lesson on the Gold and Glory Sweepstakes, an auto racing event for top Black drivers in the 1920s and 1930s.

The students made model stock cars they were going to place in a miniature wind tunnel -- powered by CO2 cartridges -- and then use what they learned in competitive races against each other. The kids sanded their cars — think Pinewood Derby — to make them race ready.

“That’d be good for me to learn about, too,” Larson said, smiling. “I don’t know much about aerodynamics. I just know when a car has grip and doesn’t have grip.”

The 28-year-old Larson impressed the boys and girls with a taste of his schedule that included a dirt late model race Wednesday in Indiana, he raced a sprint car Friday Williams Grove Speedway in Mechanicsburg, Pennsylvania and was back at the same track Saturday. He starts fourth in Sunday’s Cup race at Dover International Speedway. He won his last Cup race at Dover in 2019, his last victory before his suspension.

Larson has one win and five top-five finishes this season for Hendrick Motorsports. He told the class the No. 5 Chevrolet team has challenged for another “four or five wins, probably” but hasn’t closed the deal.

“It’s been fun. We’ve been fast,” he said. “Just based of sheer speed, we’ve probably been the fastest car each weekend, or most weekends.”

Martin Truex Jr. starts on the pole at Dover a week after he took the checkered flag in a dominating drive at Darlington Raceway. Truex -- who has three career wins at Dover -- won for the 30th time in the Cup Series.

Well, yes, except for one problem -- Truex has run out of room for his trophies.

“I’m in the process of trying to figure out what I’m going to do with all my trophies,” Truex said. “I have them at my race shop. I have a little showroom and store and for a long time that’s where I put them all. The fans could come in and see them and it was kind of a cool setup.”

The setup is no more, and the trophies have nowhere to go, leaving Truex scrambling for a solution as the 60-pound Miles the Monster trophies, among others, are piled up in a random room.

“It’s a very good problem to have, Truex,” he said, laughing.

Truex could have a few more trophies in his collection had some near-misses at Dover gone his way. The Joe Gibbs Racing star and 2017 Cup champion has been the runner-up finisher in three straight Dover races. He has nine top-10 finishes in his last 10 Dover races.

Truex had at least four wins in a season from 2016 to 2019 before falling to just one last year in his first season with crew chief James Small. Truex signed a contract extension with JGR before the Daytona 500 and said then that the team last season “came up short on a lot of those little key areas and decisions or little mistakes along the way.”

Looks like the 19 team has cleaned up those mistakes.

“I think some of it has just been, we’re faster this year,” Truex said. “A lot of decisions, a lot of the little things where we talked about missing, it’s why we ran second and third a lot of last year. Whether it was a pit stop here or there, just not being fast enough here or there, or maybe along the way we caught some bad breaks as well. There was a handful of races we should have won.”

Sunday’s race is sold out with capacity capped at 20,000 ticketed fans. ... Dover had traditionally held two NASCAR weekends but moved one race date to Nashville Superspeedway. Nashville will have a Cup race on June 20. The 1.33-mile concrete track was built in 2001 by Dover Motorsports and hosted NASCAR and IndyCar events until 2011. Nashville Superspeedway held Xfinity and Truck events, as well as IndyCar races from 2001 until 2011. “I loved two races there, but it’s always fun to learn new tracks, as well,” Truex said. ... Denny Hamlin joins Truex on the front row for Sunday’s race. Hamlin, the defending winner at Dover, is the first driver since the inception of the playoff system in 2004 to lead the points standings through 12 races to not have won a race. ... Josh Berry will make his Cup debut for Spire Motorsports driving for Justin Haley (COVID-19 protocols) on Sunday.