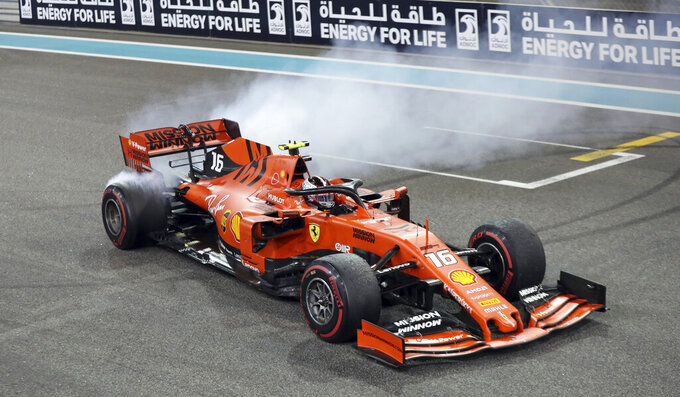 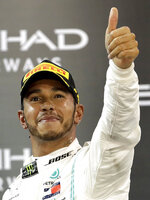 ABU DHABI, United Arab Emirates (AP) — Six-time Formula One champion Lewis Hamilton appeared to open the door for a possible future move to Ferrari when he refused to deny meeting with its chairman John Elkann.

Both four-time champion Vettel and Hamilton have yet to renew contracts expiring at the end of 2020.

Hamilton was asked after winning Sunday’s Abu Dhabi Grand Prix — the 11th win of another dominant season and 84th overall — if he did meet Elkann.

“Naturally, everything that happens behind closed doors is always private with whoever it is you end up sitting with,” Hamilton said. “For many years, I’ve never ever sat down and considered other options, because we (Mercedes) have been driving straight ahead, on the same path. We’re still on that path, and there’s very little that’s going to shift it.”

Hamilton started to add “But there’s no harm in ...” before saying “I know (Mercedes team principal) Toto (Wolff) is also looking at his options, in terms of his future, and only he will know what is best for him.”

Under the stewardship of Wolff, he has won five world titles to add to his first with former team McLaren in 2008. But Wolff’s future is also undecided, amid reports he could possibly move into another role within Formula One.

“I love where I am, so it’s definitely not a quick decision to go and do something else,” Hamilton said. “But it’s only smart and wise for me to think about what I want, if it is the last stage of my career.”

Ferrari’s team principal Mattia Binotto called Hamilton “an outstanding driver” on Friday and tantalizingly added “knowing that he’s available in 2021 can make us only happy.”

“I think it’s the first compliment I’ve had from Ferrari in 13 years ... Thank you. I’ll take it,” Hamilton said Saturday after clinching a record-extending 88th pole position. “It’s taken all these years for them to recognize me. I’m grateful ... It’s positive. I think it’s never a waste of time to ever be nice to someone.”

The 34-year-old British driver added: “(Ferrari is) a team I’ve always appreciated. To earn the respect from them is obviously very high up.”

Wolff was asked after Sunday’s race how he rates Hamilton’s chances of staying.

Wolff has not yet begun talks with Hamilton over a new contract, although previous negotiations were also kept fairly low-key and casual.

“We haven’t given ourselves a date,” Wolff said. “Come back at the end of January, February, define a schedule on when we want to discuss it.”

Wolff experienced uncertainty before when Nico Rosberg stunned Mercedes by retiring from F1 after beating Hamilton to the 2016 title.

“When Nico decided to quit, my initial reaction was actually the opportunity provided to us, and I think the choice with Valtteri (Bottas) proved to be the right choice,” Wolff said. “So I still very much hope that our relationship continues. But I’m not entirely in control of that. If one important member breaks out, that certainly provides risk and opportunity at the same time.”

Hamilton reportedly earns more than $50 million a year at Mercedes. But Ferrari might be prepared to beat that, especially since the Italian manufacturer has not won the drivers’ title since Kimi Raikkonen in 2007 and the constructors’ title in 2006.

Wolff said he and Hamilton have “talked very openly” about Ferrari’s grand stature within F1, and he understands the temptation for Hamilton to end his outstanding career in the famed red of Ferrari.

“There will be components such as financial incentives that will play a role ... I still think a driver of that level will always know that he can make an impact on a team,” Wolff said. “When he left McLaren to Mercedes, it was said that it wasn’t the right move, and it proved to be right (move). So I don’t think I want to make a mistake of underestimating Ferrari’s potential.”