ESPN and F1 announce new US broadcast deal through 2025 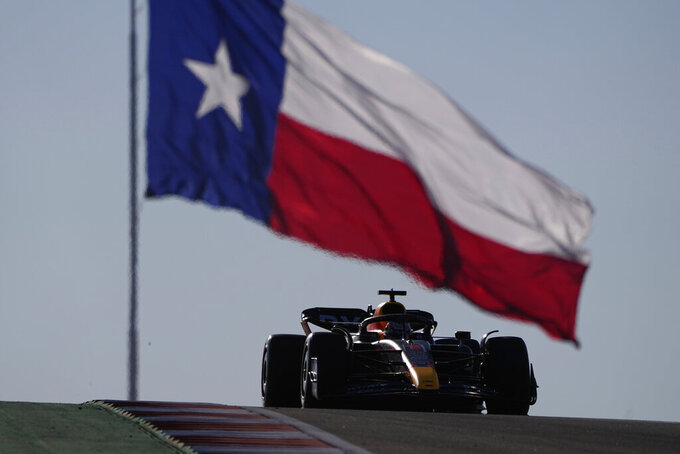 Red Bull driver Max Verstappen, of the Netherlands, drives during the second practice session for the Formula One U.S. Grand Prix auto race at Circuit of the Americas, Friday, Oct. 21, 2022, in Austin, Texas. (AP Photo/Eric Gay)

AUSTIN, Texas (AP) — With Formula's One popularity and viewership booming in the United States, ESPN and the global motorsports series announced a new broadcast deal Saturday through 2025.

ESPN has broadcast F1 in the U.S. since 2018 and the new deal will keep commercial-free, live telecasts for all races on ESPN, ESPN2 or ABC, all owned by the Walt Disney Co. ESPN Deportes will continue as the Spanish-language home of F1 in the U.S.

The deal comes ahead of Sunday's U.S. Grand Prix, which will air on ABC. Financial terms were not disclosed. ESPN did not pay any rights fees in 2018 when NBC Sports Group dropped F1 after five seasons, leaving the series without a U.S. home. ESPN has paid $5 million per year from 2019-22, and the series has only seen growth since then.

“To continue to build and grow and push behind the tremendous momentum that exits with Formula One in the United States for another few seasons is really exciting for us,” ESPN President Burke Magnus said. “We’re not going to let up. We’re just going to continue to push hard because it’s spectacular content and spectacular competition."

And shortly after the ESPN announcement, the Williams team revealed that reserve driver Logan Sargeant will likely earn a seat in 2023, making him the first American driver in F1 since 2015. American fans and sponsors have aimed for an American driver to push interest even higher.

Under the new deal, at least 16 races will be on ABC or ESPN and all race weekends will include live coverage of practice and qualifying.

Magnus said ESPN has been pleased with its partnership with Sky Sports, which allows ESPN to use the Britain-based broadcaster's race and practice productions.

“The next step for us is to build around their great production of the races,” Magnus said. “Having a more consistent presence on site, having more highlights on Sports Center, having more editorial coverage.

“The Sky production of the race is world class, I’m not sure we can replicate that ourselves without a lot of time, effort and expense."

The network said the new deal also expands its direct-to-consumer rights, with details for more content on digital platforms to be announced later.

ESPN has been the U.S. rights holder in a boom time for F1, and the series will expand its calendar to a record 24 races in 2023. That includes three in the U.S. in Austin, Miami and Las Vegas. Only the Texas race was on the calendar when ESPN took over broadcast rights four years ago.

Last season had an average of 949,000 viewers, the network said. That has increased to more than 1.2 million tuning in on average over the first 18 races this season.

“They (ESPN) were really the first to believe on us here in America," said Stefano Domenicali, president and chief executive officer of F1. “Now it seems easy because we seen the booming of the market. But we will not take it for granted. What ESPN did for the American fans is really special and is a reason why we are renewing this collaboration for the next three years.”

The inaugural Miami Grand Prix on ABC generated an average viewership of 2.6 million, the largest U.S. audience on record for a live F1 race.

Domenicali said the continued growth of the U.S. audience remains critical for F1.