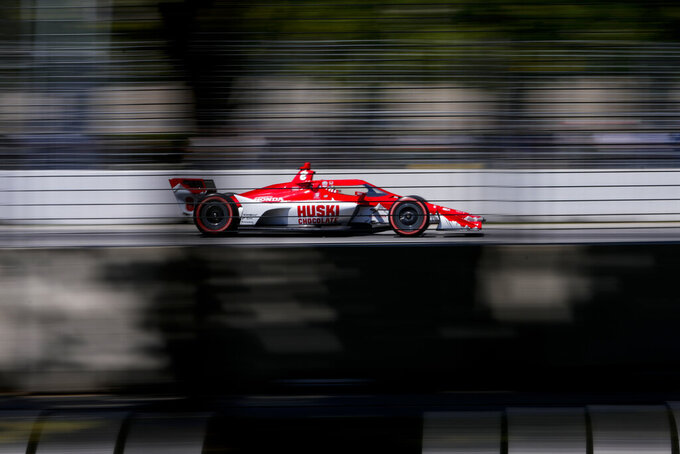 He still heads into Sunday's race at Toronto atop the IndyCar standings an with a chance to pad his lead. He's also still able to avoid the traditional midseason fanfare and the truth is, Ericsson prefers it this way.

The quiet, unassuming Indianapolis 500 champ would rather produce consistent results than idle chatter.

“I think all of the practice sessions we were right up there so we had more speed" than ninth place, Ericsson said of his starting spot, "so a bit disappointing. ... We'll work on it (Sunday) in the warmup and then go out and see what we can do in the race.”

Ericsson posted the second fastest time in Saturday's 45-minute morning practice session. But on a bumpy 11-turn, 1.786-mile temporary street course, the 31-year-old Swede struggled to find the right balance in the second qualifying round.

The silver lining is that Will Power, the Australian from Team Penske who is second in the standings, starts 16th. Defending series champ Alex Palou of Spain, Ericsson's teammate with Chip Ganassi Racing who is fourth in the standing, qualified 22nd when his car stopped during the first round of qualifying.

Ericsson also is unlikely to get drawn into the other big topics this weekend, either, with much of the focus on Palou's future plans due to CGR and McLaren both announcing this week that Palou would run for them next season, as well as complaints between Andretti Autosport teammates Alexander Rossi and Romain Grosjean about one another.

Ericsson has steered clear by thinking about his own job.

“We're in good shape,” Ericsson said before qualifying. “We're in the mix.”

Since joining Ganassi's team last season, his three wins are tied for third-most behind only two-time series champ Josef Newgarden of Team Penske and Pato O'Ward, last year's series runner-up. Newgarden has won five times over that span and could move from third to second if he can capitalize on his No. 3 qualifying spot Saturday. O'Ward has four wins.

But nobody has been more consistent this season than Ericsson, who has driven the No. 8 Honda to five straight top-10 finishes. He had seven top-10 finishes in the first nine races and has completed 984 of the 1,003 contested race laps this season.

Ericsson also has a car he believes is “consistent.”

“You get confidence as a driver and then you can drive it to the limit,” said Ericsson, who finished 20th in his only other start at Toronto. "Sometimes, you have a car that’s super fast but you can’t use that speed because it’s hard to extract. I feel like we’re in a good spot.”

And he finds himself in position to expand his lead over Power, the victim of some bad luck when Kyle Kirkwood spun out near the finish line as Power was about to finish his best lap of the day.

“I should know that you must stay in the top six every time because this can happen,” Power said. “I had a really fast car again and it's crazy. It's been like three races in a row were we were like (position two) in practice and then starting 19th, 15th, 16th or whatever. Frustrating, man.”

Dixon nearly ended one streak Saturday — falling just short of winning his first non-Indy pole since 2016. He hopes to end another streak Sunday, 22 races without wins.

The New Zealand star's last victory came in early May 2021. His next one would tie Mario Andretti for second on the IndyCar all-times wins chart with 52.

Dixon, another teammate of Ericsson's, has been one of the series’ most consistent and unflappable drivers for two decades. He's won at least one race in a series record 17 consecutive seasons and if the the six-time series champion wants to win tie A.J. Foyt's career record with a seven IndyCar title this weekend, he needs a good finish Sunday.

“We can win from here, that's the main thing,” said Dixon, who will try to close the gap from 67 points after qualifying second.

Colton Herta had the fastest car in practice — and in qualifying — despite dealing with the difficult concrete-asphalt transitions.

“Some of the corners are a little bit different with the aeroscreen and how fast you can push through them,” he said. “Overall the feel, the bumps, it feels like it’s been maintained. Places up north, like Detroit or here where they have brutal winters, sometimes you come back and the track’s completely different. But it seems to be well-maintained.”

Herta finished seventh in his first Toronto start in 2019 and captured his only win this season on Indy's road course.