Deegan ready to move on from slur and shine in NASCAR 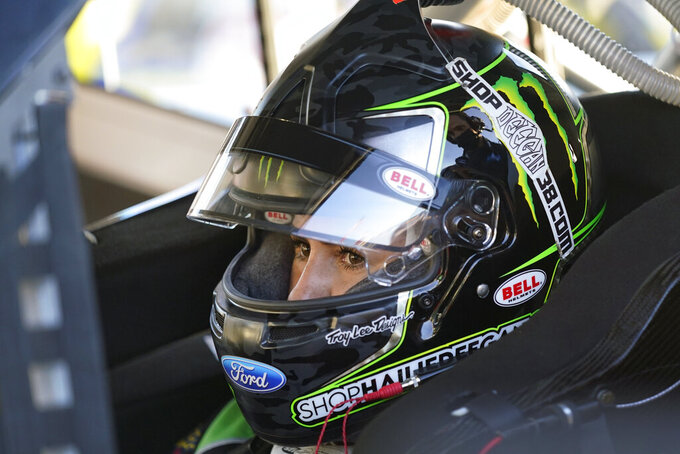 DAYTONA BEACH, Fla. (AP) — Hailie Deegan’s Instagram posts for her 939,000 followers are upbeat — downright bubbly — as they show her life at the track, her race-crazed family tagging along on countless adventures, and her sales pitches to buy the freshest HD merch.

She even packs the shipments herself.

Her post from Jan. 10 seemed innocuous: Deegan behind the wheel of a race simulator for a virtual race with the caption “TONIGHT’S THE NIGHT!!”

The 19-year-old NASCAR prospect was having fun during the race when she was bumped from behind by another driver.

“Oh, hey! Who’s the (R-word) behind me? Don’t do that, please,” she said, using a derogatory term for the disabled during the race that was streamed on Twitch.

The backlash was swift. Deegan apologized the same night “to everyone who was offended by it” and regretted her “inappropriate slang.”

For NASCAR, embarrassment grew after another slur uttered by one of its drivers in a virtual race. Kyle Larson served a six-month suspension last season and was fired by team owner Chip Ganassi when he used the N-word to address his spotter during a livestream.

Deegan’s insult hit close to her professional home. Mike Hillman Jr., the crew chief on Deegan’s Truck Series team, and his wife have three children. The youngest is 12-year-old Mylee, who was developmentally delayed and didn’t talk until she was 3 years old or walk until she was 4.

“It got me to the bone,” Hillman said of Deegan’s remark. “That’s one of the worst curse words you could use in my house."

Deegan apologized again this week in an interview with The Associated Press, saying it wasn’t her proudest moment.

“It’s something I definitely didn’t understand how hurtful it could be,” Deegan said. “I never had been associated with that. I think because of this bad situation, it opened my eyes to something new I had not known about. But now I’m gaining a lot of knowledge on it.”

Deegan — who completed NASCAR-mandated sensitivity training this week — reached out to a Special Olympics program in North Carolina and may volunteer down the road. Deegan and Hillman had a serious conversation over the talking point, and the veteran crew chief believed she has “a better understanding of how she should use her words and be careful of what she says.”

His daughter isn’t aware of what Deegan said, though the rest of the Hillman family (which includes two teenagers) have tried to move past the issue.

“We took a deep breath, we’ve dealt with it. Me and Hailie have dealt with it on a personal and a professional level,” he said. “It’s just time to go to Daytona.”

She is indeed off to Daytona, coming off a third-place finish last season in the entry-level ARCA season standings. She made one Trucks race start at Kansas in 2020, and landed a fulltime ride this season driving a Ford for DGR-Crosley Racing.

She and everyone else will be trying to dethrone Sheldon Creed, who is back to defend his Truck Series championship when the 22-race season opens Friday night at Daytona.

The photogenic Deegan has already served as a guest host for NASCAR.com at the 2019 Daytona 500 media day and was billed at the track before last season’s 500 as “NASCAR’s Next Big Superstar” during a personal appearance. She made small talk with the first lady while then-President Donald Trump clutched the NASCAR driver’s helmet and signed it at last year's race.

Deegan got the autograph clear-coated for protection and wore the helmet in her lone season driving in the lower-level stock car series. No. 4 on the door, No. 45 on the dome.

She still wears it occasionally at the kart track.

“I had other helmets made, but I think I wore that helmet for so long that it was broken in good,” Deegan said, laughing. “I’m hoping one day I’ll wear it a race where I feel like I can win and I just wear that helmet. That would be a cool thing.”

Deegan was thrilled to take a picture with Trump, saying “it's not very often someone in their lifetime gets to meet the president.” The meeting was arranged through Twitter.

She had her keepsake — and her first taste of major social media blowback.

“I know I’m going to get hate on social media,” Deegan said. “I don’t think there’s one person with a big social media following that doesn’t get hate. It comes with having those followers and having those fans and people who dislike your stuff.”

A native Californian, Deegan learned about growing up in the spotlight as the daughter of famed motocross rider Brian Deegan. A 10-time X-Games medalist and founding member of the Metal Mulisha, Brian Deegan often chronicles the family reality-show style on the YouTube channel Deegan38. One video is titled “PRESIDENT TRUMP SIGNED MY HELMET!!!”

“Without all the attention, without the spotlight, or the eyes on me, I wouldn’t be able to race,” Deegan said. “Social media is able to give me the attention of not only fans, sponsors, to get sponsorship to go race.”

Deegan says she’s learned from her mistake and vowed to grow as a driver and person; she recently moved into her own apartment. Outside of the sensitivity session, she avoided the harsh professional repercussions levied against Larson.

“I’m not going to get into the specifics of Hailie, but we’re confident in the training we’ve put in place for the industry that speaks to all of that,” NASCAR executive vice president Steve O’Donnell said.

Ford wants Deegan to succeed and she’s surrounded by veterans to ease her transition into NASCAR. She’s leaned on retired 13-year Cup driver David Ragan for coaching her simulator sessions and David Gilliland, who made 333 career Cup starts, is several years into an ownership role. TJ Majors, a former spotter for Dale Earnhardt Jr., is on board as Deegan’s eyes on the track. Hillman was on the box for Todd Bodine’s two Trucks titles.

“I’m trying to make myself have a good learning year before we head into next year, whatever next year is going to be,” Deegan said. “I have goals in my head. Whether it goes as planned, it’s kind of unknown.”

She’s brushed off comparisons to Danica Patrick, the last female driver in the Cup Series, whose pipeline of women has largely dried up. On Instagram or on the track, all eyes are on Deegan.

“This will be the proving year of kind of where Hailie Deegan stacks up,” Hillman said. “Hopefully we can shock a lot of people.”