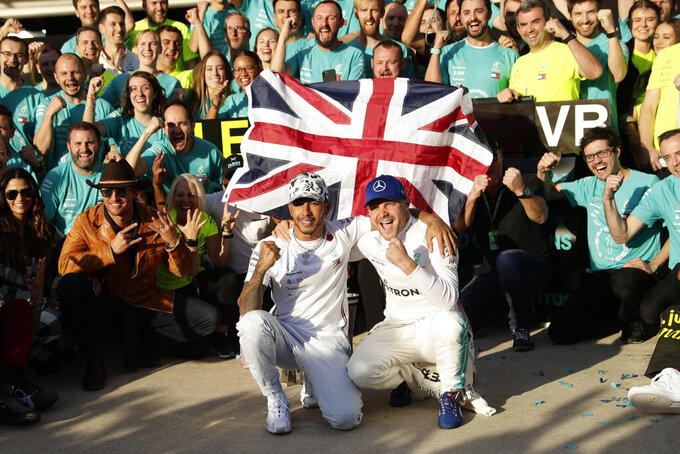 AUSTIN, Texas (AP) — From uncertainty about his future, to his best year in Formula One, Mercedes's other driver, Valtteri Bottas, has been through plenty of ups and downs in 2019.

Even one of the best races of his career will be swallowed up as a footnote in history.

Bottas started from pole position, then reeled in teammate Lewis Hamilton on the final laps Sunday to win the U.S. Grand Prix . Yet his seventh career victory was almost immediately lost in the celebrations for Hamilton's sixth career F1 championship.

"He deserves it," Bottas said. "He's had some season."

Bottas was still alive if the title chase Sunday, even if just barely. He needed to win just to have a chance to extend the championship to Brazil in two weeks. But he also needed Hamilton to finish lower than eighth.

The title was all but decided as soon as Hamilton bolted up to third midway through the first lap. At that point, the only question was whether Hamilton would punctuate the title with a victory on a track he's conquered five times since 2012.

Bottas at least denied him that.

"He wanted to win the title by winning the race. I stopped that. It feels good," Bottas said. "Winning it was the only thing I could do to try to maintain the title hopes. I did my part, but Lewis was still strong as he always is. He got the championship. Quite mixed feelings really."

Bottas has won four times this season. He took the season opener in Australia and has won two of the last three races. He's reach the podium 11 other times.

That's quite a run for a driver who was facing speculation just a few months ago that he might be jettisoned by Mercedes in 2020. The team instead re-signed him in late summer for another season.

"I had no idea what was going to happen. I just had to wait," Bottas said. "As a driver, it's not an ideal situation."

The partnership with Hamilton has worked very well for Mercedes. Unlike the tension that simmered between Hamilton and Nico Rosberg when those two battled for championships from 2014-2016, Bottas has been a quiet and clear No. 2.

The low-key Finnish driver has lacked controversy and delivered enough good performances to help Mercedes earn three of its six consecutive constructor's championships while Hamilton chased driver's titles. His four wins this year came after having none in 2018.

Bottas would like to turn that into a real run for the driver's championship in 2020.

"Being best of the rest doesn't feel good," Bottas said. "But the positive is that it's my best season in Formula One."