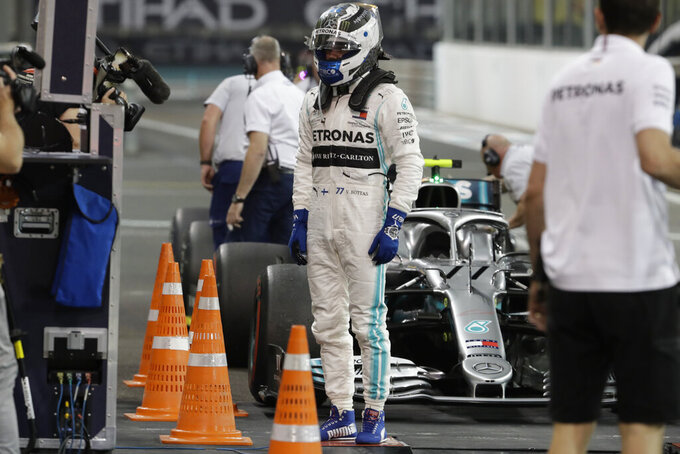 ABU DHABI, United Arab Emirates (AP) — Mercedes driver Valtteri Bottas was fastest in the second practice for the season-ending Abu Dhabi Grand Prix and was also involved in a crash on Friday.

The Finnish driver swerved into the side of Romain Grosjean’s car as the Frenchman was passing Bottas down the right, sending both spinning across the track and causing the session to be halted for a few minutes to clear debris. Bottas, who was quickest in the first practice earlier, appeared to be most at fault.

The accident prompted Grosjean to let out a loud expletive over the team radio, but Bottas was quick to shift the blame onto the French driver.

“He turned in on me and didn’t leave any space,” Bottas said. “There was nowhere for me to disappear ... I thought he was aware I was there. Maybe he didn’t look at the mirror before turning in.”

Race stewards investigating it saw things differently and gave Bottas his first reprimand of the season.

Bottas had already done enough to post the leading time, finishing .310 ahead of Mercedes teammate Lewis Hamilton and .386 clear of Ferrari driver Charles Leclerc under the floodlights at the Yas Marina circuit.

“Very good day on track,” said Bottas, who was racing with a new engine. “The first few runs were good. I had a positive feeling in the car.”

Hamilton, who has won 10 of 20 races this season, felt he was somewhat short of his best.

“Just getting into the rhythm wasn’t possible for me,” Hamilton said. “I’ll make sure I get that straight for tomorrow.”

Leclerc improved his speed after clipping the barriers coming out of Turn 19, in the same place where teammate Sebastian Vettel crashed during the first practice.

Turn 19 proved to be problematic, with Alfa Romeo driver Antonio Giovinazzi narrowly avoiding a similar crash in the evening.

In the first practice, Bottas finished .535 seconds ahead of Red Bull driver Max Verstappen and .634 ahead of Hamilton.

Verstappen won the Brazilian GP two weeks ago for his third win of the season, and the Dutch driver is cautiously optimistic about Red Bull’s chances of taking pole position on Saturday on a track where the German manufacturer has won the past five races.

“Overall I’m pretty pleased,” said Verstappen, who has taken pole twice this season. “Mercedes look very strong here again, and will be hard to beat, but I still think it will be close tomorrow.”

Hamilton clinched his sixth world title two races ago, and the veteran British driver celebrated by briefly swapping the No. 44 on his car bonnet for No. 1.

Just before the end of the first session, Vettel misjudged the entry into Turn 19 and needed a gearbox change. Earlier, Renault driver Daniel Ricciardo stalled with an engine failure, causing oil to leak onto the track.

There is a third practice on Saturday before qualifying starts at 5 p.m. local time, matching the conditions for Sunday’s race.