Bottas ahead of Hamilton in 2nd practice for French GP 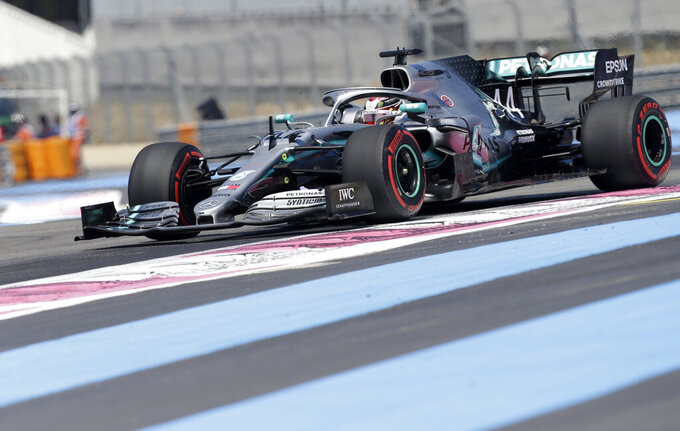 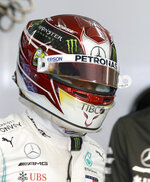 LE CASTELLET, France (AP) — Valtteri Bottas topped the leaderboard ahead of Mercedes teammate Lewis Hamilton in the second practice for the French Grand Prix on Friday.

Bottas was .424 seconds quicker than Hamilton, reversing their positions from the first practice, while Charles Leclerc was third fastest ahead of his Ferrari teammate Sebastian Vettel.

Championship leader Hamilton made a rare mistake in the second session when his left rear tire slid going into a turn and he clipped one of the bollards, sending him momentarily off track. Red Bull driver Max Verstappen was just behind him and briefly slid off.

"I had a big snap into Turn 3 which I thought was a good catch (recovery)," Hamilton said. "It's been a bit difficult with the balance of the car; maybe that's to do with the new tarmac they have here and the high temperatures. In general, the car pace is really good."

Although Verstappen did not appear to be impeded by Hamilton, stewards investigated the incident before deciding to take no action against either driver.

"Both drivers agreed that the limited rear visibility and the angle of Car 44 (Hamilton's) made it difficult for Hamilton to see the approaching car (Verstappen's) and agreed that Hamilton rejoined slowly," the stewards concluded in a statement. "The stewards could observe from the on-board video that Hamilton looked in his mirrors at least twice before attempting to rejoin the circuit."

Mercedes has won all seven races this season — five wins for Hamilton and two for Bottas — and again looked stronger than Ferrari.

"All the tires are gone," Leclerc moaned over the team radio near the end of the session as he struggled on the soft tire compound.

Hamilton also expressed some concern at the start, saying his front tires were not balanced properly.

"It will only get warmer so tires are going to be on the limit, especially on Sunday," Bottas said. "We still struggle with the balance over the course of the entire lap."

Vettel also had a moment in P2 when he went too wide but regained control of his car, while French driver Romain Grosjean's Haas car kept slipping around the 5.8-kilometer (3.6-mile) track.

"I can't have a car that's (only) good over the first five corners," lamented Grosjean, who has scored only two points.

There is a final practice on Saturday ahead of qualifying.

Ferrari again struggled with their tire set ups in P1, but Leclerc found some form toward the end to clock the third-fastest time. Vettel, who has not won in 15 races dating to the Belgian GP last August, was fifth behind Verstappen on a frustrating day.

Vettel already trails Hamilton by 62 points and has two second-place finishes so far.

Hamilton, who is chasing a sixth world title, has won the last three races and leads Bottas by 29 points overall.

The French GP is the eighth of 21 races this season.