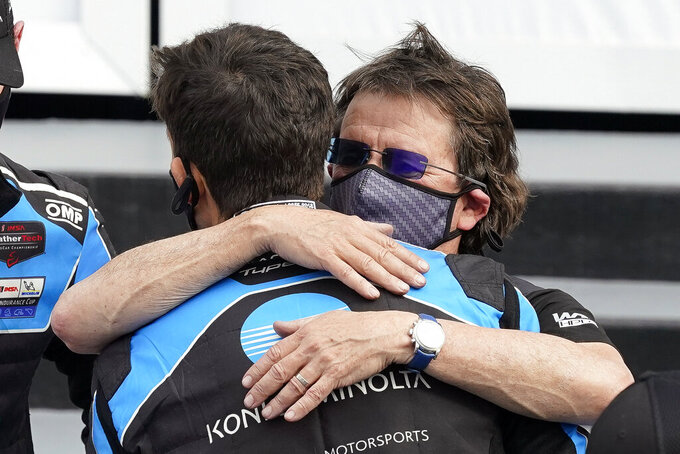 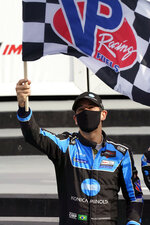 Wayne Taylor Racing won its record-tying third consecutive Rolex 24 at Daytona, using a new car and a new lineup to beat some of the best racers in the world.

Filipe Albuquerque held off Kamui Kobayashi and Renger van der Zande — both part of WTR's winning teams the last two seasons and both seeking to become the first winners of three consecutive Rolex races — to give the overhauled Taylor team its fourth win in the last five years at Daytona International Speedway.

Albuquerque was challenged over the final 25 minutes by van der Zande, driving a Cadillac for Chip Ganassi Racing, until a punctured tire sent van der Zande to the pits with seven minutes remaining.

Kobayashi cycled into second but didn't have enough to catch Albuquerque, who closed out the first overall Rolex victory for Acura in the prestigious twice-round-the-clock endurance race.

Wayne Taylor left General Motors after 28 years at the end of last season to become a factory Acura program. He brought his oldest son, Ricky, back to the team for the refresh and they celebrated the overall victory as youngest son, Jordan, earned a class victory Sunday with Corvette Racing.

“Today is probably one of the best days I've ever had,” Wayne Taylor said, equating it to the 2017 WTR victory when both sons drove for him. "We won it with Ricky, and Jordan won the GT class with Corvette, and then the Wayne Taylor Racing program won it overall.

“As a family, it was a very, very special day.”

Wayne Taylor took ownership of his new cars — used Acura's handed down when Roger Penske closed his team at the end of last season — in November and needed every day during the offseason to prepare for Daytona. He replaced his entire lineup with newcomer Albuquerque and Acura holdovers Ricky Taylor, Helio Castroneves and Alexander Rossi.

The trio all drove the Acura the last three seasons for Team Penske and Taylor hoped would help the transition.

It's the first Rolex for Castroneves and Rossi, who have won four combined Indianapolis 500s. Albuquerque won in 2018 driving a Cadillac; Ricky Taylor won in a Cadillac for his father's team in 2017.

Ricky Taylor, who closed out the 2017 Rolex win for WTR, was in the car late and had the option to finish the race but decided to turn it over to Albuquerque because the Portuguese driver was rested and could tackle track conditions that included increased wind speeds.

“We decided we wanted somebody as fresh as possible in the car,” Ricky Taylor said. “He got in there and was an absolute monster and carried it at the end.”

When Taylor switched to Acura, he released van der Zande, who was grabbed by Ganassi as the team returned to sports car racing after a one-year hiatus. Kobayashi was not retained by WTR for endurance events so he signed on for Daytona with Action Express, and former teammates Kobayashi and van der Zande were battling to become the first winning drivers of three straight Rolex races.

The Dutch driver closed on his old team multiple times in the final 25 minutes but couldn't make a pass for the lead and was eliminated when his tire blew.

“I could see his eyes in my mirrors,” Albuquerque said of van der Zande. “He was so hungry for this, especially with the whole story of leaving Wayne Taylor. I was lucky that they had a puncture.”

The Ganassi team also suffered a tire puncture about two hours earlier when six-time IndyCar champion Scott Dixon was driving. The team also rallied from two penalties incurred by newcomer Kevin Magnussen, who spent the last seven seasons in Formula One. The team fell to fifth in the final standings.

“Absolutely gutted,” Magnussen said. “Looked like we had the race won right there. Renger had really good pace catching (Albuquerque) and I think he would have had a really good chance to win the race.”

Jordan Taylor closed the race to earn a a 1-2 Corvette Racing finish in the GT Le Mans class. The winning lineup included Nicky Catsburg and Antonio Garcia, who was pulled by General Motors with seven hours remaining when he tested positive for COVID-19.

Garcia was tested during the race weekend so he could return to Spain after the Rolex. He drove nearly eight hours in the race and was last in the car Sunday morning.

“The protocols we have are super serious, the drivers don’t really get to interact, even in a 24-hour,” Jordan Taylor said. “Antonio, I saw him before the race and that was the last time, and even then, we’re always social distancing, we’re always taking the correct protocols.